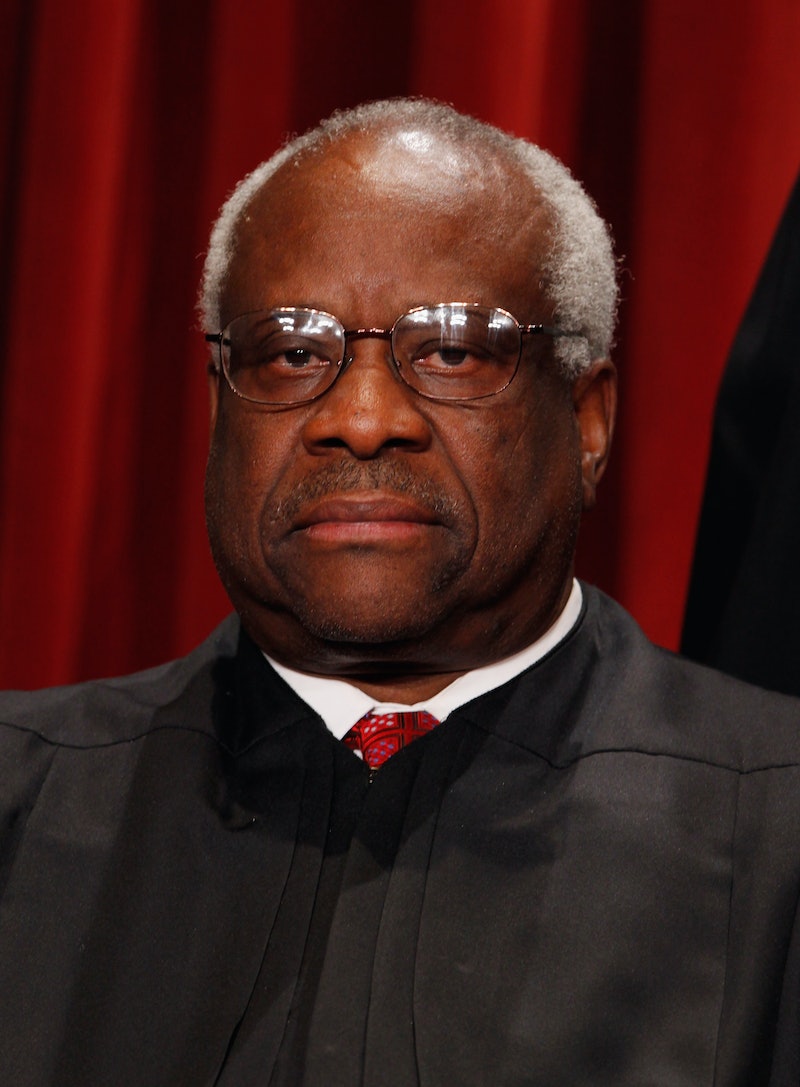 If you grew up in the '90s, you may recall the name "Anita Hill" being bandied about in the news in the early part of the decade. Hill became known for accusing then-Supreme Court nominee Clarence Thomas of alleged sexual harassment during his nomination hearings in 1991, and for the media circus that followed. (Thomas repeatedly denied Hill's allegations and was subsequently confirmed as a justice on the Supreme Court.) Now, HBO is revisiting the story with their new film Confirmation, and interest in Hill and Thomas has reached a level not seen in decades. But while Hill's claims did not stop Thomas' nomination, did anyone else ever accuse Clarence Thomas of sexual harassment?

Although Hill is the most well-known person to accuse Thomas of sexual harassment, she is not the only woman to do so. Another woman, Angela Wright, also claimed that Thomas had allegedly said inappropriate things to her while the two worked together at the Equal Employment Opportunity Commission. She, like Hill, was subpoenaed by the Senate to testify against Thomas during his nomination, but was never called upon to do so. The reasons for her exclusion are a matter of debate, but one thing remains clear: Wright still alleges that Thomas made unwanted sexual remarks to her. Here's what she claimed about her experience with Thomas in an interview with NPR in 2007:

"I had gone home, turned on CNN, and saw Anita Hill standing there ... I didn't know her ... But I knew that Clarence Thomas was capable [of what he stood accused of] because he had made similar remarks to me and in my presence about my body and other women's bodies, and he did – he was very egotistical, and he did pressure me to date him, and he did drop by the house when unannounced."

One person who is unsurprised by the allegations brought by Hill and Wright is Lillian McEwen, who was in a relationship with Thomas at the time when his alleged harassment of Hill is said to have occurred. Though McEwen never claimed that Thomas had been inappropriate toward her, she has alleged that Thomas would often talk about the women he worked with. "He was always actively watching the women he worked with to see if they could be potential partners. It was a hobby of his," McEwen claimed in an interview with Michael A. Fletcher of The Washington Post in a 2010.

Another person who didn't outright accuse Thomas of anything, but who did allude to his alleged inappropriate behavior toward women in the workplace, was Sukari Hardnett. Hardnett worked as Thomas's special assistant at the Equal Employment Opportunity Commission in 1985 and 1986, and according to the Wall Street Journal, she gave the Senate the following statement during Hill's hearings:

"Clarence Thomas pretends that his only behavior toward those who worked as his special assistants was as a father to children and a mentor to proteges. That simply isn't true. If you were young, black, female and reasonably attractive, you knew full well you were being inspected and auditioned as a female ... Women know when there are sexual dimensions to the attention they are receiving. And there was never any doubt about that dimension in Clarence Thomas's office."

Of course, during his 1991 hearings, Thomas maintained that he was not guilty of sexually harassment:

"I deny each and every single allegation against me today that suggested in any way that I had conversations of a sexual nature or about pornographic material with Anita Hill, that I ever attempted to date her, that I ever had any personal sexual interest in her, or that I in any way ever harassed her."

In the end, Thomas was confirmed by the Senate in a narrow 52-48 vote, and, of course, still sits on the Supreme Court today. Hill is currently a professor at Brandeis University, and is often credited with helping to bring the previously underpublicized problem of workplace sexual harassment out of the shadows and into the light.

With the release of Confirmation, attention is again being paid to Hill's allegations against Thomas and the effect it had on public discourse surrounding sexual harassment. But people shouldn't forget the other women who bravely risked their reputations and public scrutiny to come forward with their own allegations against Thomas, because they, too, played a role in helping to prove that coming forward when you believe you've been sexually harassed is not only possible, but important.