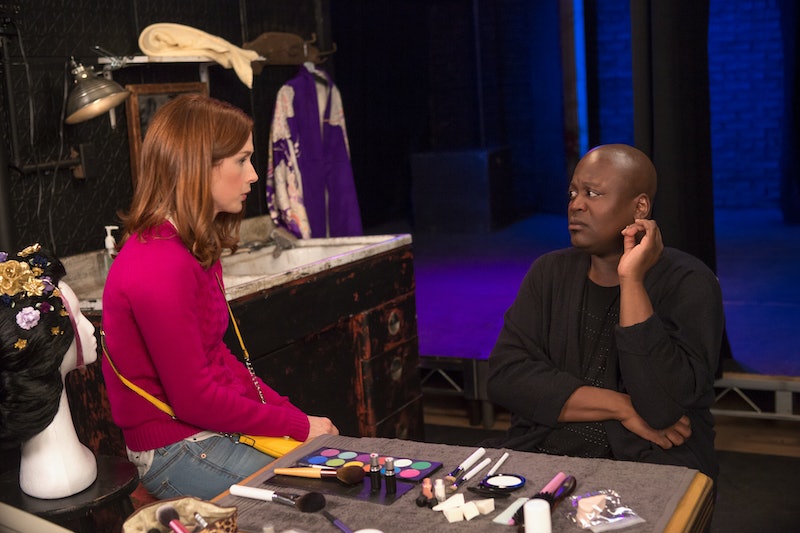 Kimmy Schmidt Season 2 premiered on Netflix Friday, and wasted little time in seemingly addressing the backlash the mostly well-received show drew after its freshman year. In Episode 3, Kimmy's struggling actor roommate Titus Andromedon stages his latest one-man show, the story of one of his "vividly" remembered past lives. "Kimono You Didn't" is the tale of Murasaki, a sorrowful Japanese geisha. Titus' play is protested by people from an internet message board, and the plotline could be seen as Kimmy Schmidt 's response to allegations of racial insensitivity. Bustle reached out to Netflix for comment, but has not yet received a response.

One such person who took issue with that aspect of the show after Season 1 aired was Medium writer Meghan O'Dea. "The show’s overarching theme is exploring what it means to be an outsider," she wrote. "But [it] approaches that question from the perspective of an insider white feminist, one that applies both to Kimmy and Tina Fey herself." The piece goes on to address the show's alleged "misrepresentation and underrepresentation of people of color," referencing Kimmy's crush and classmate Dong and Jacqueline's hidden Native American heritage as problematic elements. Vulture writer Libby Hill described the Season 1 subplot in which the white Jane Krakowski plays a Native American as "sloppily marginalizing a group of people who are already as marginalized as you can get." And, though the show regularly pokes fun at whiteness and privilege, that alone doesn't give Kimmy Schmidt a free pass from viewers and critics who take issue with its racial comedy.

The internet kerfuffle also led to vocal support of Fey and the show's brash comedy. Salon writer Arthur Chu addressed the Kimmy Schmidt controversy in a piece titled "Racial Stereotypes Can Be Funny." Chu's opinion is that — when the race-based jokes work on Kimmy — it's because the show "never apologizes" for them. "Tina Fey’s high-wire act is all about the alchemy of making it OK to laugh at big, heavy issues," he writes.

In an interview with Net-A-Porter, co-creator Tina Fey responded to the backlash by choosing not to. Her "new goal," Fey said, "is not to explain jokes ... There’s a real culture of demanding apologies, and I’m opting out of that.” The new season of Kimmy Schmidt makes it look like her thoughts on that subject haven't changed. In fact, the show appears to skewer that "culture of demanding apologies."

In the Murasaki episode in Season 2, Titus is portrayed as being truly invested in the story that he's telling. There's no scene where he rubs his hands together and plans to exploit another culture for his own personal benefit. And he believes he was Murasaki — it is, in his mind, his story to tell. When he finds out that there's an internet message board community who are determined to put a stop to his play, he inadvertently encourages Kimmy to invite the group to a performance. (Important: both Titus and Kimmy call the group "haters.")

Here's where Fey and co-creator Robert Carlock could be telling us how they really feel about social justice bloggers. The forum goes by the name Respectful Asian Portrayals in Entertainment (spell that acronym out for yourself), and its members spout phrases like, "I don't wanna hear the end of anything anyone has to say!" And they demand that the geisha should have been "a successful business woman, or a college professor, or a stay-at-home dad."

Against all odds, the members of the group are moved by Titus' performance. As they congratulate him and marvel at their own lack of anger, one of the protesters is destroyed by her own over-sensitivity. Unfamiliar with the feeling of not being offended for once, she starts to spiral: "Yeah, I feel weird. It's like I can't breathe. Wait. I'm not allowed to say that. I offended myself." And then she disappears in a blinding light.

There's a lot to unpack here. First of all, Kimmy Schmidt seems to be saying that critics are usually looking for something to offend them rather than reacting organically. Secondly, the show appears to declare that the end can justify the means, meaning that if the story is affecting or the joke lands, it doesn't matter who is telling it and who it's about. (Obviously, not everyone feels this way.)

And the kicker that made me put down my coffee this morning was what appeared to be a reference to Eric Garner, the man who died after allegedly being put into a chokehold by a New York City police officer and repeatedly telling him "I can't breathe," sparking protests all over the country. NBC New York reported that the officer maintains that "he used a legal takedown maneuver known as a seatbelt, not a chokehold."Fey didn't write this Season 2 episode — that was The Daily Show and 30 Rock alum Sam Means — but this loaded reference contributes to the show's general air of defiance. "We'll do what we want," basically. The critics who weren't fans last year will likely really not be fans this year. Regardless, the message comes through loud and clear. Unbreakable Kimmy Schmidt won't be backing down from racial comedy this season, like it or not.