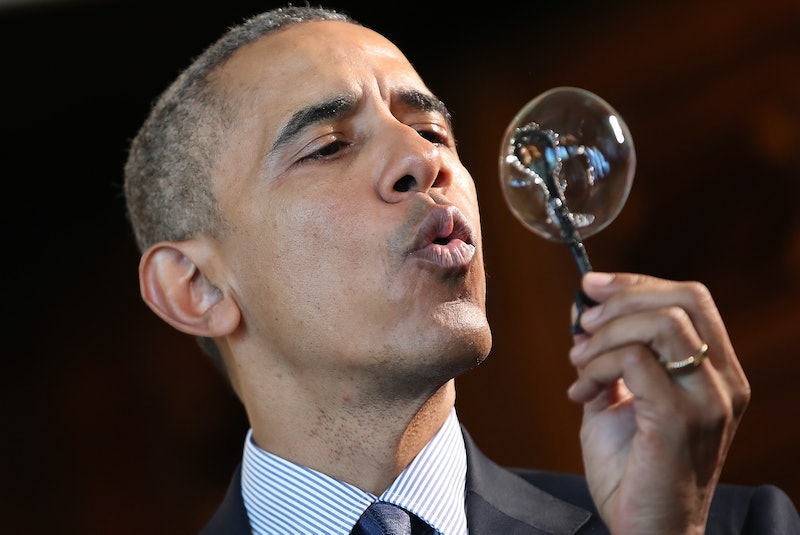 Since the cartoonist's death in 2000, almost all of Charles Schulz's work has been collected in large volumes. Now, President Barack Obama has written the foreword to the 25th Peanuts anthology, which will hit store shelves on April 21. This penultimate installment will contain the Peanuts strips published from "1 January 1999 to 13 February 2000, ... the day after Schulz's death," as well as Li'l Folks : the single-panel predecessor to Peanuts, which Schulz wrote from 1947 to 1950.

President Obama is the latest in a long line of Peanuts supporters to pen the openings to Fantagraphics' anthologies. Jonathan Franzen, Matt Groening, and Billie Jean King are among the previous contributors. It's no surprise, really. Peanuts is an institution, a sentiment with which POTUS agrees:

Like millions of Americans, I grew up with Peanuts. But I never outgrew it.

Wherever I lived, wherever I travelled, I could find those three or four panels in the paper each morning. And Charlie, Snoopy, Linus, Lucy, Franklin and the gang brought childhood rushing back.

For decades, Peanuts was our own daily security blanket. That’s what makes it an American treasure.

The 26th and final volume of the Peanuts anthology is slated for an October release. It will contain assorted Peanuts artwork from Schulz, and feature an afterword from the cartoonist's widow, Jean Schulz.