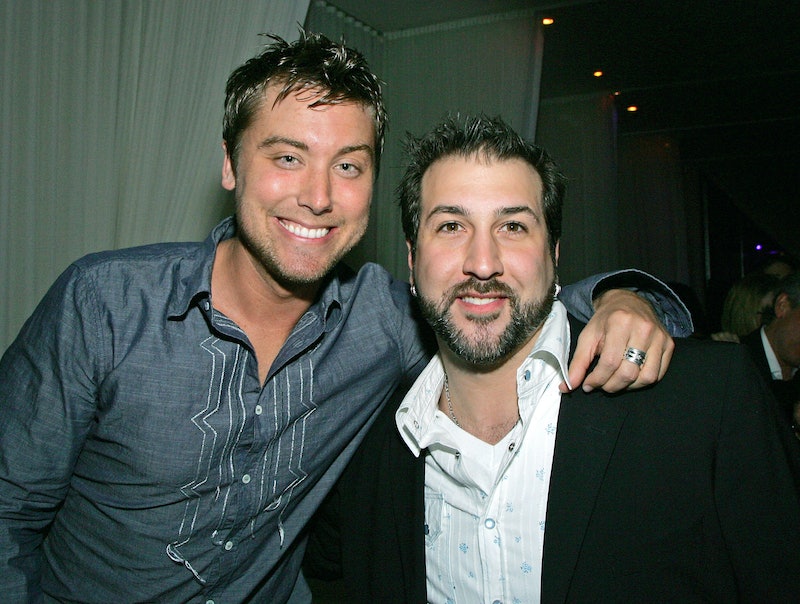 Everybody has an opinion about karaoke: some people love nothing more than drunkenly singing on stage with their closest friends a harrowing rendition of "Baby Got Back," while others (like me!) would rather crawl into a hole than sing in front of a crowd of people. If you're a famous pop star, it stands to reason that you're probably pretty comfortable onstage, and would think nothing of belting out someone else's tune for fun... right? Well, if you're Lance Bass and Joey Fatone of *NSYNC, you use the opportunity to sing a song you've likely never sung in public before: the Backstreet Boys song — "I Want It That Way."

The two boy bands were famously pitted against each other at the height of their fame in the late '90s, and the ultimate pop music debate has always been that of *NSYNC vs. BSB. It's a war that still incites passion from both sides of the argument to this day, with fans on either side still passionate about which band is better. So now that video has surfaced of two *NSYNC members belting their boy band hearts out to a BSB classic, it will definitely get fans of both groups riled up.

Of course, members from both bands have long insisted there was never a feud between them, so all I can glean from this is that Fatone and Bass simply know a good karaoke song when they find it. I mean, seriously, is there a better song to belt out than this pop classic? I will likely never do karaoke in my life, but if I were going to, this is the song I'd pick. It's passionate, it's heartfelt, and everybody knows the words, so it's an easy choice.

As for their take on the song... well, you'd assume that once-massive pop stars would rock it out with ease, but the guys had a bit of trouble getting started with their performance. There are awkward dance moves, singing over each other, and breaks for laughter, but it simply goes to show that karaoke is universally awkward and hilarious... even for members of one of the most popular boy bands of all time.

It's honestly heartening to see that Fatone and Bass are just as bad at karaoke as any of us are, and they appeared to have a lot of fun with it, which is all that matters. So, if your weekend plans include a little karaoke, just channel your new karaoke mentors, Bass and Fatone, and they will guide you to karaoke excellence.