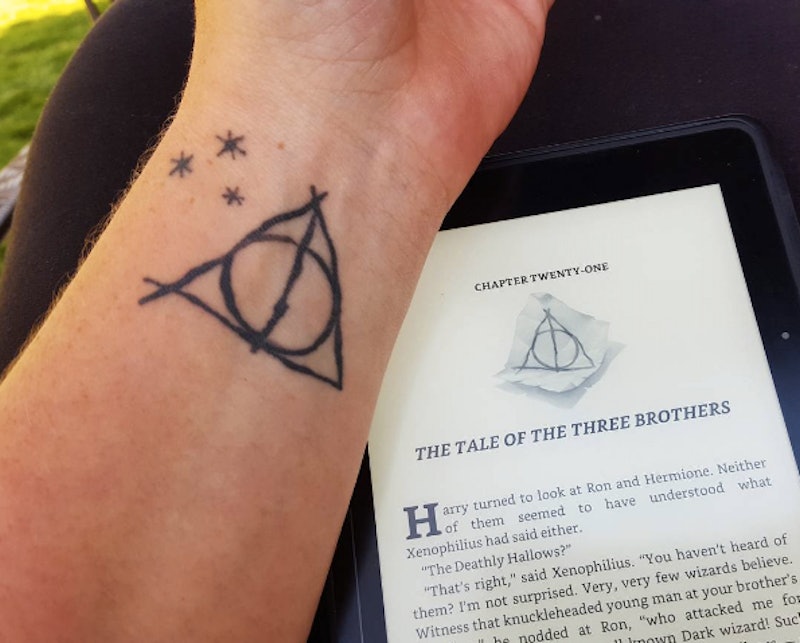 Just admit it: every Potterhead wants a Harry Potter tattoo. I can think of no better way to show love for your favorite fandom than by permanently inking it into your skin. But with seven books, a bunch of amazingly quotable lines, and a whole cast of loveable characters, what do you choose to symbolize your love for Harry Potter?

Because the symbol has become so popular and so synonymous with Harry Potter, it's proven to be a fan-favorite in the tattoo parlor. But while it's easy to just get the symbol inked on you as-is, some fans have reimagined or elaborated on it for some truly magical Deathly Hallows tattoos. I'm so tempted to steal some of the designs below, or at least let them inspire me to design my own Deathly Hallows tattoo!

Can you spot the Deathly Hallows? At first glance this tattoo appears to just be a mandala, but look a bit more closely and you'll see it contains something a little more magical...

Admittedly, when I first looked at this tattoo I was like, "Why are there birds on it?" (I was totally having a Portlandia moment.) Then I realized it's actually Death, and that made this tattoo infinitely more awesome.

Combining the Deathly Hallows, Harry's glasses, a wand, and the most sob-inducing word in the entire series is a sure-fire way to announce to the world, "Yeah, I really love Harry Potter."

I AM OBSESSED WITH THIS DECONSTRUCTED DEATHLY HALLOWS. I never would have thought to do it, but now I need this on my body ASAP.

Love that this tattoo makes Death the centerpiece while still sneaking the Deathly Hallows in. It's creepy and sinister and I'm all about it.

I can't get over how cool the perspective makes this one look.

Yes to everything about this tattoo. One of the best parts of the movie adaptation of Deathly Hallows was the gorgeously animated "Tale of Three Brothers," and this tattoo perfectly captures the beauty of that scene.

We see a lot of people who utilize the Deathly Hallows in quoting "Always", but I love how this tattoo mixes it up by using it while quoting the very last line in the series.

There's a LOT of Harry Potter shenanigans going on in this tattoo. The Deathly Hallows, the Dark Mark, chapter stars, and a lightning bolt? Someone is a super-fan.

Points for including color (so many Deathly Hallows tattoos are black and white!) and of course the amazing quote found on the Potter's tombstone.