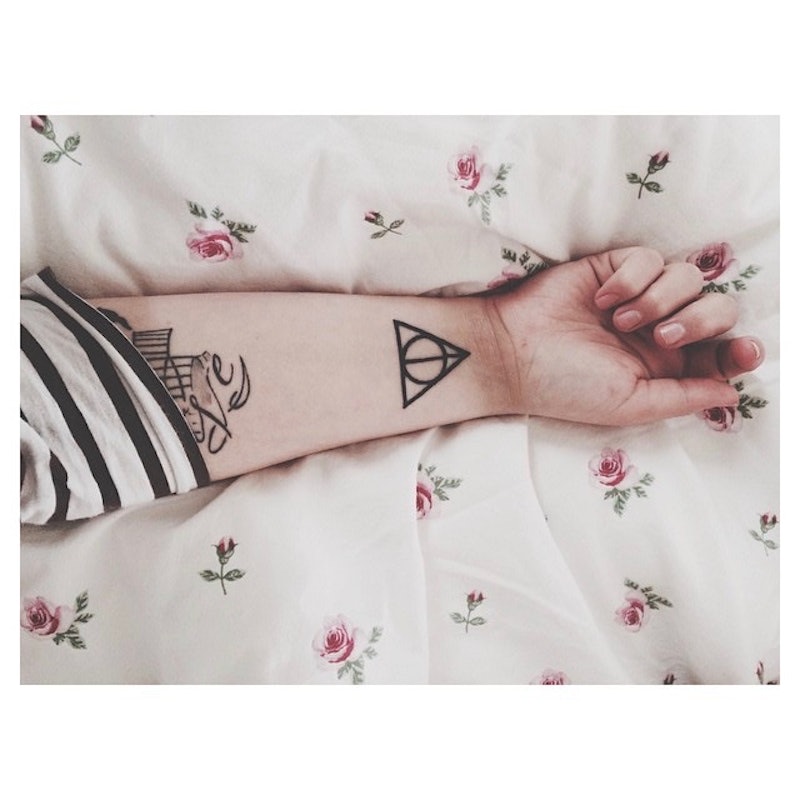 I think most of us can agree that a vast majority of the Internet population are fans of Harry Potter and friends. If you are one of the many who fall into this category (*raises hand with Hermione-in-class confidence*) and you're looking for a new way to solidify your love for the boy who lived, perhaps an awesome Harry Potter tattoo is in order!

J.K. Rowling's books have a lasting place in our hearts, so why not make a lasting mark on your body? After all, with a new Harry Potter play coming to London's West End and the Fantastic Beasts spinoff movie hitting theaters later this year, Potter fever is alive and well. Since they say that a picture is worth a thousand words, one of the many iconic symbols from the series might just be the way to go with some new ink.

While tattoos were once taboo, they have undeniably burst into the mainstream in the last few years. Celebrities and civilians alike are flashing their new tats on Instagram for the world to see, tempting all of us to join in. And why not have one of these amazing Harry Potter tattoos be your first (or 50th) trip under the needle?

Perhaps the most popular Harry Potter tattoo, the symbol of the hallows is graphic and simple.

A perfect homage to our favorite boy wizard.

For those who like to dance on the dark side.

Just as Moony, Wormtail, Padfoot, and Prongs would have wanted.

Don't tell me you've never pretended to run through brick walls. The Hogwarts Express is the best.

A special option for those book purists out there.

Because even in a world of magic, sports reign supreme.

If you can't have house pride, what can you have?

Everyone wants to be the MVP who catches the snitch. 150 points for Gryffindor!

“The scar had not pained Harry for nineteen years. All was well.” *Cries forever*

To protect you from the dementors of the world.

Gotta shoutout to the alma mater.

Nothing better than a tattoo to keep Harry Potter with you. Always.