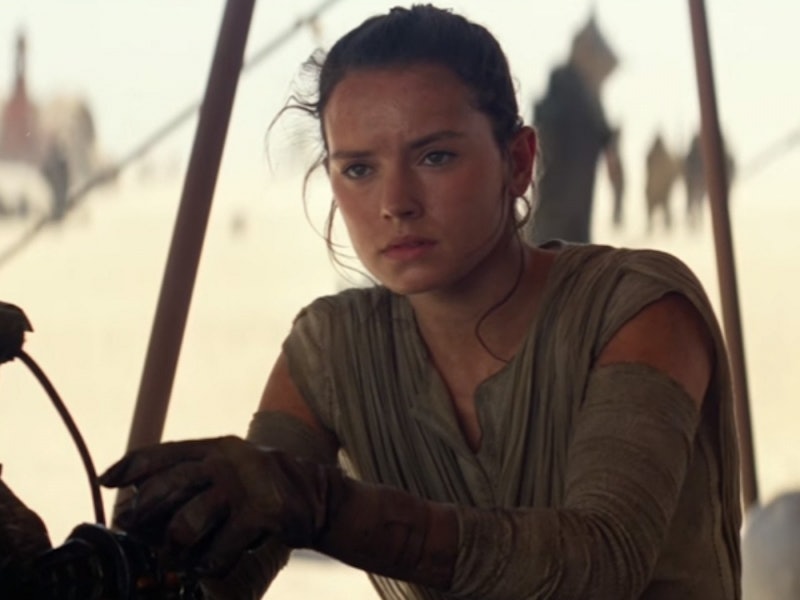 There's no bigger question mark looming over the Star Wars fandom than Rey's lineage, especially after J.J. Abrams's recent bombshell about her heritage. At the Tribeca Film Festival on Friday, Abrams first claimed that Rey's parents weren't featured in Episode VII — at all. Specifically, he said, "Rey’s parents are not in Episode VII. So I can’t possibly in this moment tell you who they are. This is all I will say: It’s something that Rey thinks about too." Hard to misinterpret, right? It pretty much rules out everything fans have come up with thus far. After this comment caused a fair amount of commotion among fans, Abrams clarified. As he told Entertainment Weekly after the event, "What I meant was that she doesn’t discover them in Episode VII. Not that they may not already be in her world.” The plot thickens! With these two — somewhat contradictory — statements now up in the air, no one's really that much closer to the truth. But, who could Rey's parents still be if they are characters she hasn't "discovered"?!

Let's dissect this further. Abrams' use of the word "discover" could mean a variety of things. It could mean that even though Rey has interacted with her parents, she hasn't yet realized who they are. Or, it could mean that Rey's parents are people that she literally, physically did not interact with in Episode VII. If we operate under the latter assumption, the doors of possibility fling wide open. Take the following 13 Star Wars characters who could be Rey's parents — since she's definitely yet to "discover" them — for example.

When the Rogue One trailer dropped — and even beforehand — people quickly jumped onto the idea of Jyn Erso as Rey's mother. If Jyn had Rey slightly later in life, the theory could totally hold up. There are physical similarities between the two, and they even share the same accent.

The silver stormtrooper who never took her helmet off throughout The Force Awakens didn't interact with Rey, and she's the right age, so hey, let's not totally disregard this theory — even if it's super random.

Given the stark resemblance between Rey (Daisy Ridley) and Keira Knightley, Rey may actually be the granddaughter of Knightley’s character (Sabé) from The Phantom Menace. Sabé was a royal handmaiden that served as a decoy for Queen Padmé Amidala, and though that doesn't seem like a super important role to tie Rey's character to, you never know.

Though it's not entirely impossible for Rey to be Obi-Wan's daughter, if the two are related, she's probably his granddaughter. Things that make this a possibility: one, their accents; two, the way they dress; and three, the lightsaber. The theory poses that during Kenobi's exile, he fathered a child, who then had Rey. Because Obi-Wan had Luke's lightsaber longer than Luke and Anakin did (combined) it would make sense for Rey to be so drawn to it, especially if she's not Luke's daughter.

Ezra Bridger — a Jedi and part of the Rebellion — shares similarities with Rey. Both are loners and scavengers, both are survivors, and both were orphans who grew up — unbeknownst to them —Force-sensitive.

Kanun was a leader of the Rebellion and a Jedi as well. He survived Order 66, and he's not too old or too young to be Rey's father... so he's definitely a contender.

The fact that "Rey" means "King" points to the serious possibility that Rey has royal lineage. Emperor Palpatine's age might not exactly correspond to that of Rey's father, but this is the Star Wars universe so there could be a work around we haven't yet considered. Plus, Rey's accent — and even the way she fights — is reminiscent of Emperor Palpatine.

He's a Jedi master, so it would explain Rey's capabilities. The only issue is that he's much too old to be Rey's father, but it's possible he's in her lineage.

This theory's a little crazy, but stay with me. What if Shmi (Anakin's mother who had him by immaculate conception) is somehow related to Rey? If she got pregnant with Anakin this way, then age wouldn't hold her back from also being Rey's mother.

Mara Jade was a Force operative that fell in love with Luke Skywalker and became a Jedi in The Thrawn Trilogy. Luke and Jade had a son together, but there's nothing to say that Jade couldn't have had a daughter before or after she met Luke.

Another wild theory that could be true: Rey is actually the reincarnation of Anakin Skywalker. If you consider the timing of things, the way Rey carries herself, fights, and how Force-sensitive she is, this isn't such a crazy idea after all.

In the Star Wars prequels, we learned that Anakin Skywalker was immaculately conceived by the slave, Shmi Skywalker. So, isn't it possible that Rey could also be born this way?

Ever since word got around that Laura Dern will have a role in Star Wars: Episode VIII, fans have been trying to place her. She's closer in age to Luke, Leia, and Han — three characters who ostensibly fit the bill to be Rey's parents, so hey, this seems like it could be an option.

It's a frustrating puzzle — trying to uncover Rey's origins — but a fun one no less. Even though it seems like the closer we get to answers, the more questions we have, I'm in for the ride.