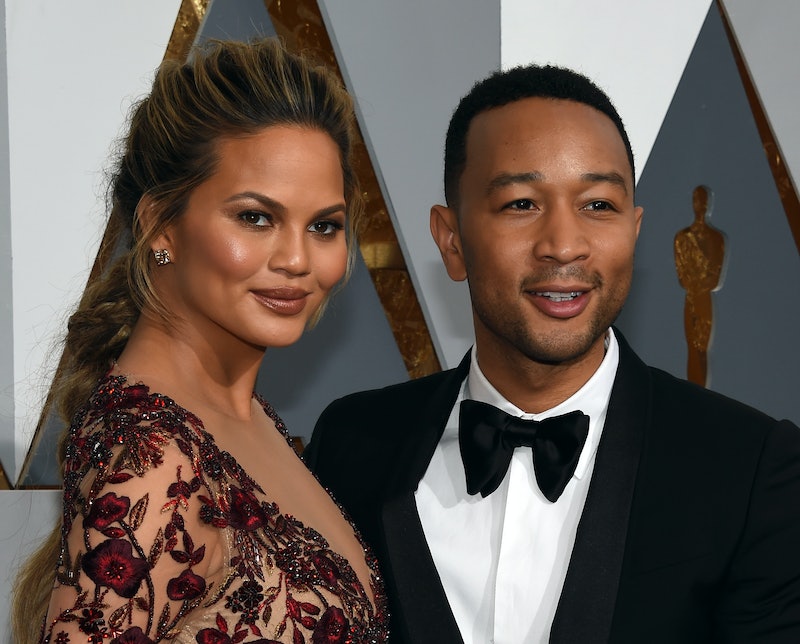 The moment many have been waiting for is finally here— Chrissy Teigen and John Legend have become the proud parents of a baby girl. The famous duo's daughter was born on April 14, and the couple announced the birth three days later with a sweet Instagram posted by Teigen, followed by a tweet by Legend. Both announcements revealed the baby's name, Luna Simone Stephens — prompting the question, why is Teigen and Legend's baby's last name Stephens, not, well, Teigen or Legend?

Well, as sad as it might make you that the singer wasn't destined for greatness due to his last name from day one, John Legend's real last name isn't "Legend." It's actually Stephens — a totally fine name, but nowhere near as exciting as Legend, so I understand the change. So it makes sense that instead of getting a stage name as a last name or the last name of Teigen, baby Luna got Stephens. Not a bad choice, as Luna Simone Stephens rolls of the tongue so nicely, doesn't it?

As for her first and middle names, an interview Teigen had with Stephen Colbert recently revealed that they had been OK-ed by none other than President Barack Obama — even though Legend thought it was a little too "Hollywood." Yet Legend and Teigen must have come to an agreement, because announcing their baby's name, the duo couldn't have seemed more excited. Wrote Legend on Twitter on April 17, "Our new love is here! Luna Simone Stephens, born on Thursday, the 14th. We couldn't be happier!"

Teigen's cute Instagram photo also celebrated her new baby's birth, in which she admitted that, no surprise, she and Legend are already exhausted following Luna's arrival. Get used to it, folks — here's to many more sleepless nights for the Legend-Teigen-Stephens family as they bring home baby Luna. Congratulations on becoming what I can already assume will be one of the coolest family units of all time.