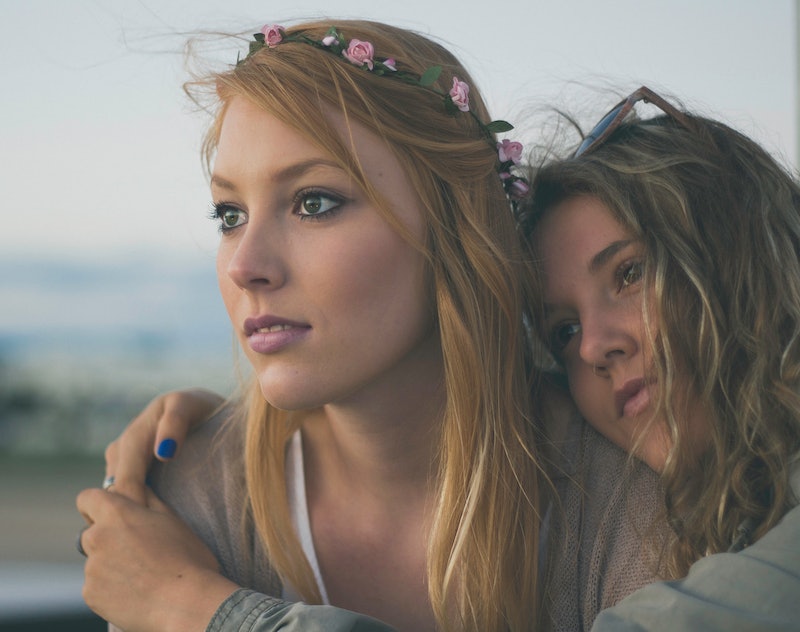 Lately I’ve been thinking and reading a lot about female friendship in fiction. For me, books and real life often run together — I’m never sure if I subconsciously choose to read novels about what’s on my mind or if it’s the other way around. But what I do know (apart from that some books are my friends) is that fictional friends have influenced my own real friendships, and my friendships have influenced my novels.

Like a lot of other people across the world, I’ve recently been engrossed by Elena Ferrante’s Neapolitan tetralogy, which starts with My Brilliant Friend. Over the course of the four books, the narrator, also Elena, writes the history of her friendship with the mercurial, undoubtedly brilliant but limited Lina, starting with the memory of how, as young girls, Lina dared Elena to come with her up the stairs to the door of Don Achille Carracci, “the ogre of fairy tales," to ask for the return of their lost dolls. It ends with Lina’s disappearance when the women are 66 years old.

The daring and the stairs are both significant; it is the first of many times Lina’s influence helps Elena to face fear and climb, eventually out of the bitter poverty and violence of the life they were born into.

One of the things that make these books so compelling is Ferrante’s honesty. The friendship between Elena and Lina isn’t to these two, the cocktails and man-gossip of the friends in Sex and the City , for example, would be an alien planet. It’s a hardscrabble friendship, based not so much on love – though there’s that, too, sometimes – as much as an awareness of how absolutely necessary they are to one another. The relationship is without question the most important of either woman’s life, but they take from each other as much as they give. They are rivals, they resent each other – hate each other at times – but they are bound together for life. Neither would be the person she is without the other.

"It’s a hardscrabble friendship, based not so much on love – though there’s that, too, sometimes – as much as an awareness of how absolutely necessary they are to one another."

To me, the power to influence and inspire is one of the most interesting aspects of friendship between women, and it’s often overlooked. In Temples of Delight by Barbara Trapido, a book I’ve loved since I was a teenager, Alice’s bourgeois world is overturned by the abrupt arrival – in the middle of Silent Reading at school – of Jem, a girl full of stories, in love with Mozart’s Magic Flute and literature. Jem disappears just as abruptly, but five years later, when Alice is living a shadowy, unsatisfying life, she appears again, this time in the form of the manuscript of a novel and the magisterial New Yorker Giovanni. For Alice, Jem is color and scale – life writ large. Because of her, Alice’s life is bigger.

In Sheila Heti’s How Should A Person Be? , described as "part literary novel, part self-help manual and part racy confessional," the narrator, also Sheila, is literally searching for a way to be. At the beginning of the book, as her marriage ends, she meets Margaux, a talented painter, and the two become friends. Sheila says: "I admired her courage, her heart and her brain. I envied the freedom I suspected in her, and wanted to know it better, and become that same way, too."

Friends are the first people we love outside our families or family networks – the first we find and choose for ourselves and as such exceptionally important, especially to those like the orphan Jane Eyre whose families have failed them. How cruel is the death from typhus of pious, brilliant Helen Burns, Jane’s one friend? When I first read it, it cast a shadow over me for days.

"Friends are the first people we love outside our families or family networks – the first we find and choose for ourselves."

Over time, true friends become our families. One of my favorite friendships in crime fiction is that of Maureen, the heroine of Denise Mina’s Garnethill trilogy, and Lesley. Lesley rides a motorbike and works at a women’s shelter; the indelible Maureen, an alcoholic whose alcoholic father abused her, begins the series by finding her boyfriend, the married Douglas, murdered in her Glasgow flat. Lesley helps Maureen in her quest not only to discover what happened to Douglas but to take unorthodox LSD-based revenge on his killer. When Lesley gets pregnant late in the series, Maureen doesn’t worry that their friendship is going to change; instead she reflects that if she and Lesley are going to bring up this baby, she, Maureen, had better get herself together and find a job.

In How Should A Person Be?, the beginning of Sheila and Margaux’s friendship reads like a romance. The first time she sees her at a party, Sheila thinks Margaux has designs on her husband but actually it’s Sheila herself she’s interested in. After the party, they dance around one another until finally – when Margaux sends a frustrated note – they arrange a bus trip out together during which both are so nervous, they barely speak.

Like romances, friendships, especially those made at an impressionable age, can reach deep into a person’s sense of herself and the way she is perceived – or would like to be perceived – by the world. Who doesn’t present the best version of herself to the person she most wants to impress? And after that, isn’t it just one more step to presenting the version of oneself one wishes one was or would like to become – and opening the door to trouble? As Leslie Jamison writes in her endorsement, Robin Wasserman’s forthcoming and hotly anticipated Girls on Fire, is ‘a dark, propulsive fever dream of youth and friendship – a piercing vision of what it means to mistake yourself for who you are in someone else’s eyes.’

"Like romances, friendships, especially those made at an impressionable age, can reach deep into a person’s sense of herself and the way she is perceived – or would like to be perceived – by the world. Who doesn’t present the best version of herself to the person she most wants to impress?"

Friendships can be every bit as intoxicating as sexual love, and when intoxication meets a personality in flux, especially a young one, the result can be incendiary. Tana French explores the idea in The Secret Place , in which an intense friendship between five roommates at a Dublin boarding school leads to murder. Megan Abbott and Laura Lippman, brilliant psychological suspense writers both, have also treated the subject, in The End of Everything and Every Secret Thing respectively.

When starting my own new novel, Keep You Close , out May 3, I knew I wanted to write about a friendship that changed my protagonists’ lives. Rowan, my narrator, was a lonely, motherless teen when she met Marianne and her family, the charismatic Glasses. They turned her life around, making her feel as if she belonged, encouraging her, inspiring her, and so, even after ten years of estrangement, when Rowan hears that Marianne is dead in ambiguous circumstances, she has to find out what happened. As the keeper of her secrets, Rowan is also the only person who knows that Marianne might have had reason to jump – a reason that might now put Rowan’s own life in jeopardy.

Exploring their relationship was some of the most fun I’ve had as a writer so far. Intense friendship between women is a joy of a subject. It can be life-altering, a gift and a burden at the same time, the catalyst for a character to become her best self – or her worst. To have a true friend, we have to allow another person into the most private areas of our selves – and in so doing, hand them the power to hurt us.