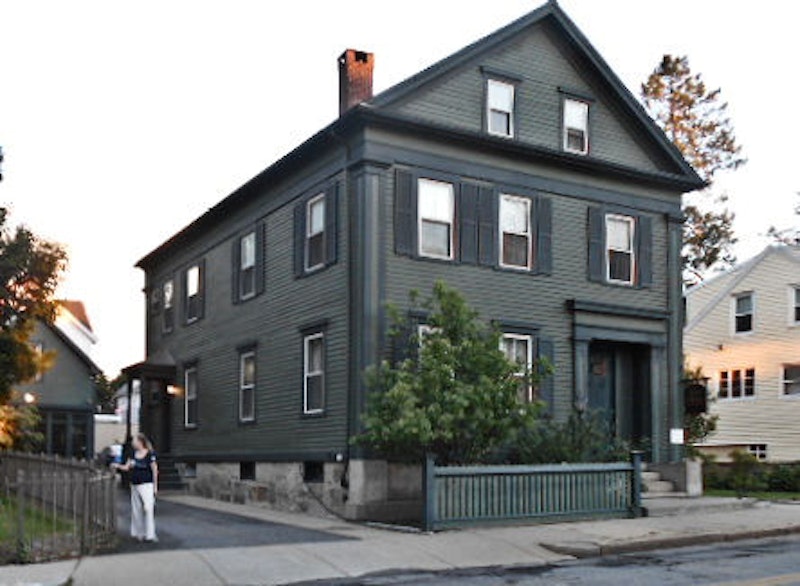 As those of you who also have a Google Alert on the word "ghost" probably already know (what? I can't be the only one!), a tourist claimed to have photographed a ghost at the hotel that inspired The Shining this past weekend. The Stanley Hotel, located in Estes Park, Colorado, is most famous for its link to what is arguably Stephen King's most famous story; the author and his wife spent a night at the hotel in 1974, right before it closed for the season, and its empty, winding hallways were enough to inspire the man to give the world "REDRUM" and an enduring wariness regarding identically-dressed twins. But the 117-year old hotel, founded in 1909 by F.O. Stanley, is also considered to be haunted by a number of ghosts, including the hotel's founder, his wife, Flora, and a former housekeeper.

And the accidental ghost photographer — who spied an eerie human form while simply trying to take a panoramic shot of the hotel's lobby — is hardly the first person to bring public attention to the hotel's supposed otherworldly residents. In fact, the Stanley offers special packages for guests who want to try to make some contact with the beyond, including tours of the hotel that touch upon its spooky lore, and even one room that comes with an energy meter (to help you better suss out whether anyone who has shuffled off this mortal coil is sharing your bed, of course).

But the Stanley is far from the only hotel proud of its haunted heritage. The five hotels below not only admit that they house some guests who don't show up on the guest book; many of them offer special tours and amenities for their human guests who are just as interested in happenings beyond the grave as they are in the hotel's Yelp rating.

Maybe you're saying to yourself, "Hey, visitors talking about cold spots and ghostly hands on their necks is all well and good; but I need to stretch my haunted hotel dollar. How can I be sure that gruesome and unnerving deaths actually took place at this hotel?" If you're not inclined to take a proprietor's word that a hotel is haunted, start with this bed and breakfast, which just so happens to be located in the home that was the site of one of the 19th century's most infamous murders.

All daytime visitors can tour the premises of the house, where Borden is alleged to have murdered her father and stepmother with an ax in 1892 (she was never convicted, and maintained her innocence for the rest of her life). But overnight guests at the Lizzie Borden Bed & Breakfast Museum have the option of spending the night in the bedroom where Borden's father slept, or the room where her stepmother's body was found.

But what if you don't get any thrill from sleeping in a room where another human being was murdered? Don't worry! The lodging has been the site of numerous ghost sightings through the years, according to proprietor Lee-Ann Wilbur, who had a personal experience with a moving shadow and some misbehaving lightbulbs in the house a decade ago. Fans who are interested in the spooky Victorian goings-on, but can't make it out to Massachusetts, can follow along on the hotel's Ghost Cams site.

Built in 1891, Connecticut's Yankee Peddler Inn is one of many old New England hotels reputed to be haunted — numerous folks have claimed that the spirit of hotel founder Alice Conley walks the hotel's halls, still micro-managing from beyond the grave (her favorite rocking chair remains on display in the hotel's lobby, and is said to sometimes rock on its own). The hotel has appeared on a number of paranormal shows, and while the spot doesn't offer dedicated tours, former owner Sanjay Patel has gone on record talking about staff members' ghost experiences.

However, unlike many old New England hotels reputed to be haunted, the Yankee Peddler Inn was also the subject of its very own horror movie, 2011's fantastic The Innkeepers . Director Ti West, who stayed at the hotel while shooting another horror movie in the area in 2009, was moved to create The Innkeepers after having some unexplained experiences at the Yankee Peddler: West told the New York Times, "Weirder stuff would happen back at the hotel than on the set...I don’t believe in ghosts, but the TV would go off and on, the phone would ring and there was no one on the other end, I had really vivid dreams. It’s just a weird vibe in this kooky old place.” Portions of the film were also shot at the hotel, meaning that even if you don't see any actual apparitions on your trip there, you could probably still get some cool Instagram photos.

Walk 20 feet in any direction historic Savannah, and someone will tell you about the ghosts that haunt that particular spot — though it's formally known as the Hostess City, I would suggest re-dubbing it the Ghost-est City (yes, I'm as horrified that I actually typed that as you are, don't worry!), with ghost-related industries that will help you do everything from knock back a drink in a supposedly haunted basement to drive around talking about ghosts in a giant hearse.

But even in this Beetlejuice-ian burg, 17 Hundred 90 Inn & Restaurant, Savannah's oldest inn — named after the year it opened — is considered to be among the most haunted spots in town. Though the hotel doesn't offer unique ghost tours of the premises, it is a featured attraction on pretty much every ghost tour of Savannah — and if you can't make it down yourself, the hotel's website archives the spooky experiences of those who have stayed at the hotel, too.

The hotel's most famous resident is supposedly a ghost named Anna, who ended her own life after falling for a sailor whom she met while staying at the inn in the late 18th century; she is alleged to spend her afterlife antagonizing female guests (you are welcome to spend your own stay at the 17Hundred90 Inn leaving Anna some informative texts about contemporary feminism to peruse in her presumably frequent downtime).

The Bourbon Orleans Hotel is considered by many to be New Orleans' most haunted hotel — which is really saying something, right? Beginning its life in 1817 as a ballroom, the Bourbon Orleans was transformed into an orphanage and convent in 1881— a change that seems tailor-made to disrupt the force, charge the building's energy, and whatever other fancy, metaphor-ish phrase you like to use to say "fill the dang place with spooky crap."

And by the time the Bourbon Orleans was converted into a hotel in 1964, it was reputedly home to 15-20 ghosts — mostly children, but guests have also spotted a Confederate soldier and a lone dancer who had not been informed that the place was no longer a ballroom (or, uh, that she had been dead for about 100 years). The hotel offers an annual event called Ghost Camp, and though I'm not totally sure what it is, I know I could have been way happier there than at math camp.

A retired ocean liner, the Queen Mary sailed for 31 years, from 1936 through 1967, before making a permanent home in southern California, where she has been moored ever since. The Queen Mary is on the National Register of Historic Places, and has been converted into a hotel that offers multiple restaurants, a spa, and ghosts on ghosts on ghosts. The ship/ hotel leads multiple daily ghost tours of premises, which give visitors access to areas forbidden to guests on the historical walking tours (suckers); the ship also offers a number of paranormal packages, focused on the ship's supposed haunted history.

Fun fact: my family spent the night on the Queen Mary when I was 10 without anyone mentioning any of this stuff to me! When I asked about it a few years later, my aunt told me that they "hadn't thought it was relevant." I'm not saying that's why, as an adult, I sought out a job that allows me to write about ax murder with alarming frequency; I'm just saying, I don't really have any better explanations.