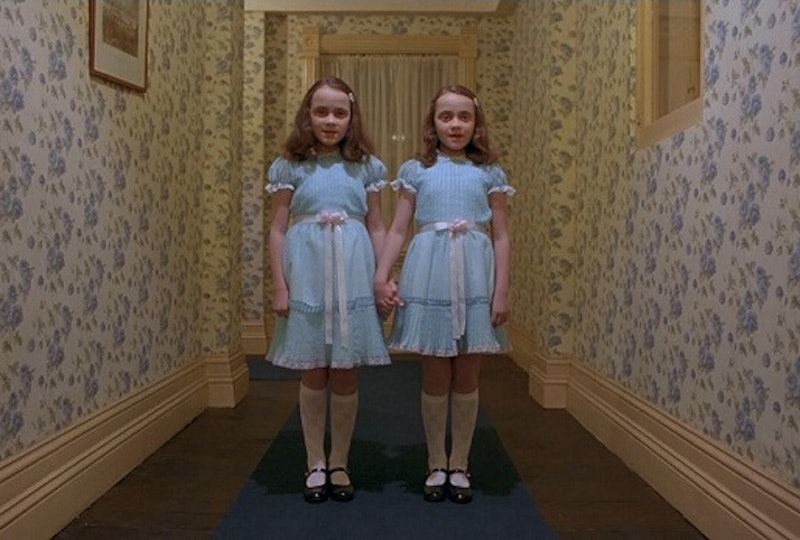 Just in case you have been clamoring for a little fright in your life, this week has served you up a delicious treat. Turns out that a ghost was spotted in the hotel that inspired The Shining . You know, the hotel that gives people nightmares to this day. The hotel first depicted in an amazing novel by the same name that Joey Tribbiani hides in his freezer. The Stanley Hotel, with its sweeping staircases and winding hallways, gave Stephen King the original story idea when he visited the place himself. He had a dream about his son being chased down the hallway, so naturally he came up with the rest of the idea once he woke up. Thanks to that location and dream, we now have one of the most classic horror thrillers in our lives.

Turns out that ghost stories don't just stay on the pages of novels anymore. Henry Yau snapped a picture of the grand staircase, only to find that his panoramic shot captured a figure at the top of the staircase. From the looks of it, it's an adult wearing period clothing about to walk down the staircase and into the lobby. Upon even further examination, it looks like there might be a second figure of a small child standing next to the older figure. Maybe it's the ghost of a family that really liked their visit to this hotel? Or maybe it's just a weird camera malfunction? I can tell you that my panorama pictures never come out that great. Take a look for yourself!

Doesn't that look like a woman and her little kid?! I guess we can expect a lady in a tub to make a photobomb appearance next. As long as no one comes barreling into my bathroom door with an axe, I'm down! In the black and white version of the photograph the two ghostly figures actually look more clear.

Even seeing the movie as an adult when it came back to theaters for a limited time gave me severe anxiety. The imagery and the tone of the whole film gave me the creeps! Good to know that the location still has the ability to instill fear in the public all these years later! Below are some fun facts about the Stanley Hotel that inspired the movie you might not have known:

1. Someone Got Electrocuted In One Of The Rooms

According to sources close to the hotel, scary things have been happening there for a while! A housekeeper was electrocuted during a lightning storm in room 217 in 1911. She survived, but since then, the room's ~spookiness~ has been part of the hotel's folklore.

2. The Room From The Movie Doesn't Exist

If you were wondering why the room numbers from the book were changed in the movie, it was under the request of the hotel management. They didn't want people to stay away from the room and lose business, so they changed the number to a room that didn't actually exist.

3. The Rooms Play The Movie On A Loop

If you happen to be at the hotel on a visit, you can be treated to the uncut version of the film playing on a loop on channel 42. Nothing to keep you up at night with terrors, am I right?

The original owner of the hotel, Freelan Oscar Stanley, built the structure after recovering from a sickness in the area. He thought it was so beautiful he would come back every year. In fact, he said that he spent more money than he made when the hotel was open to the public — little did he know then how notorious it would one day become!

More like this
Andie From 'How To Lose A Guy In 10 Days' Is A Total Gemini
By Nina Kahn
Here's How Netflix Should Adapt Prince Harry's Memoir Into A Movie
By Ginny Hogan
Alicia Silverstone Revives Her 'Clueless' Character In This Super Bowl Commercial
By Jake Viswanath
Rupert Grint Just Shared A *Major* Update About Ron Weasley’s Future
By El Hunt
Get Even More From Bustle — Sign Up For The Newsletter
From hair trends to relationship advice, our daily newsletter has everything you need to sound like a person who’s on TikTok, even if you aren’t.