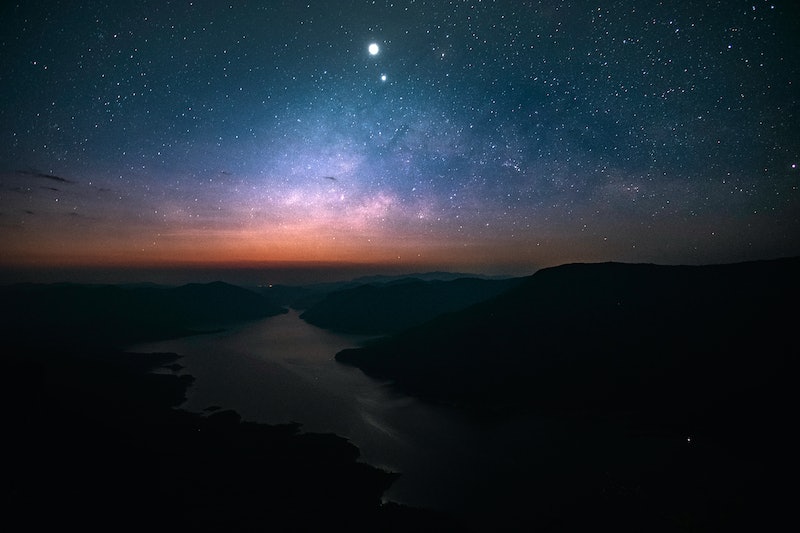 Recently, I was talking with a co-worker about planets going retrograde, and we both agreed that while, ha ha, we are strong, independent women who don't need the planets to tell us what to do, we also, like, just mark our calendars just to be, um, careful and cover our bases. Well, my sweets, five planets will be retrograde in April 2016, so here's how to celebrate — because the only thing to do in the face of topsy-turvy-ness is to dance. Duh.

Jupiter was the first planet to turn retrograde this year on Jan. 7, followed by Saturn on March 25 and Mars on April 17. Pluto turns retrograde today, actually (April 18), and on April 28, Mercury, the retrograde-iest of all planets, will turn as well. Hardcore, am I right?

Each planet has its own characteristics; as such, they're all supposed to have an effect on a different aspect of your life. Honestly, this particular retrograde season is just like one giant tough love seminar: Jupiter, for example, deals with personal growth and expansion, so when Jupiter turns retrograde, a lot of your support systems and crutches have a habit of disappearing. This sucks and is the worst and makes it seem like you're stalled out, but it also forces you to find your internal strength. See? Tough love.

Kind of makes you want to yell, "Oh my God, FINE, I GET IT" at the universe, doesn't it?

The other areas of your life that may be affected by this retrograde-tastic period are communication (Mercury), love and relationships (Pluto), emotions, particularly anger and aggression (Mars), and karma (Saturn), so... yeah. Things may be a little weird, and some self-care amazingness is definitely in order. Here are some ways to celebrate all the learnin' you will be doing about yourself, because rewards are important. I'm going to be the best parent.

1. Go On An Adventure All By Yourself

As I mentioned earlier, when Jupiter is retrograde, you're pretty much forced to rely on your own talents and strengths. Celebrate your independence with a solo trip. It doesn't have to be, like, a trek around the world (because seriously, who has that kind of time or money? I don't, that's for sure). You don't even have to leave your state. It can be an overnight hiking trip, a weekend beach vacation, a train ride to another city — anything that helps illustrate what a strong, resilient, independent human you can be and already are.

2. Do Something In The Moment

When I say that Saturn is the karma planet, I mean that it embodies the idea that life is cyclical, and it's a collection of wonderful things and awful things. Putting in the work is important for the future. When Saturn is retrograde, though, it can sometimes lead to self-doubt and paranoia that you can't achieve your goals. That's an okay feeling. You're not a steel robot. Practicing mindfulness, if only for a few moments at a time, helps me when I can feel my brain racing forward and my chest tightening, because, oh God, what if no professors will write my grad school rec letters and I can't get into any Masters programs and I never find love and never have children and die alone. Mindfulness can be breathing exercises; it can be meditation; it can be painting your nails and focusing solely on that task. Just focus on the right now. You'll get through this.

3. Channel Your Energy Into Something Physical

So Mars retrograde actually happens pretty infrequently (about once every two years), which... thank goodness, because Mars is all about emotion. The aggressive kind. The kind that gets you all worked with no where to go. Get out all that energy with a dance class (sites like Groupon always have great deals), or enroll in a Krav Maga Women's Empowerment Seminar, which basically entails learning how to beat the you-know-what out of anyone who tries to mess with you.

Pluto deals with love and relationships; when it's retrograde, those feelings turn inward, and it's a great time to foster some self-compassion. And honestly, the cheapest, quickest way for me to get out of my head and appreciate all that I have ~going on~? A selfie sesh. Followed by a crafting session involving my own selfies, resulting in a killer collage. And no, I don't want to hear about it being narcissistic because you are amazing and you are a work of art and it's OK to celebrate yourself sometimes. Also of note: Selfies don't have to involve a camera. You can draw yourself, paint yourself — there are infinite ways of exploring your own beauty.

Ah, Mercury! O ye of communication gone haywire! The best medicine I've found for amending the crossed wires that so often come up when Mercury is retrograde is to commit to some alone time for journaling. Yes, like a diary. Yes, handwritten. Put your phone in another room. Externalizing anxieties and wrought feelings is the first step to sorting them out and rationalizing them. You will feel better and more centered, especially if you make this a habit. Like before bed. Or in the morning before starting your day. Or at lunch. Whatever works for you.