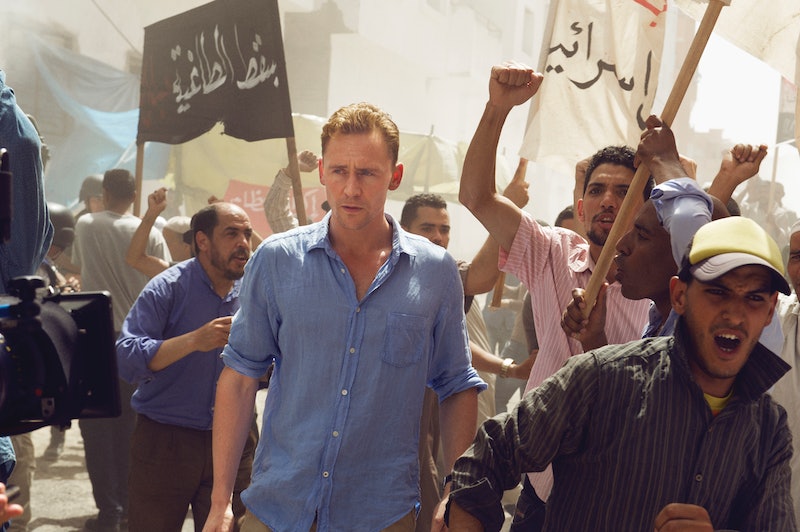 The Susanne Bier-directed adaptation of the novel The Night Manager premiered earlier in 2016 on BBC One, and is finally making its landing on American airwaves on AMC. The show follows solider-turned-luxury hotel night manager Jonathan Pine as he enters a world of espionage and intrigue to take down powerful arms trader Richard Roper. The original Night Manager novel by John le Carré, acclaimed spy novelist, was published in 1993, but a lot has changed in the world of international crime and weapons trading since then. If The Night Manager was a novel for a post-Cold War world, it would make sense for the adaptation to either preserve the message of the original or change itself to be as relevant to the modern state of the world. How accurate is The Night Manager to the book?

The alterations between the different versions occur more in the setting of the story, and less in the characters. At the show's Tribeca Film Festival premiere, director Susanne Bier tells Bustle that "the book takes place in '93 and this is in present time — so it’s actually quite different."

While the characters are still their core selves in both mediums, the updated setting informs some of the details of the plot. The prelude to the series occurs in Cairo, Egypt at the height of the Arab Spring — and Pine's solider experience comes from multiple tours in Iraq.

According to the director, the biggest differences in the show come in two forms: A time jump, and a gender swap. After the prologue of the series, the story picks up again six months later in the novel in Zurich, Germany after Pine has switched jobs. In the series, this time jump skips ahead four years and ends up in Zermatt, Switzerland. This change allows the filmmakers to explore the snowy peaks of Zermatt, allowing for some beautiful cinematography. It also strengthens Pine's prowess as a night manager, as he's now been working in luxury hospitality for at least half a decade.

The other major change is that one character has been gender swapped. Intelligence operative Leonard Burr is now Angela Burr. Bier reveals her motivations to Bustle, saying that "this being present time, we wanted to make the character a woman." Without Burr's gender swap, the series would only have one major female character, Roper's girlfriend Jed Marshall. Making the character a woman mirrors the real presence of women in government intelligence operations, and allows one of Britain's best actresses — Olivia Colman of Broadchurch — yet another platform to remind everyone how effortlessly she can dive into a complicated role.

Most of the obvious changes come at the top of the show, but that doesn't mean there aren't more changes lurking around the corner. Bier hints to Bustle that "the last two episodes [are] pretty different from the book. It maintains the heart of the book, the core of the book, but it’s actually quite different."

So, anyone who wants to spoil the series for themselves by reading up on the ending of the book may find themselves disappointed. While the show charts new territory, it still aims to preserve the spirit of Carré's original novel while keeping it relevant to the modern era. The Night Manager may be one of the happy cases in the art of adaptation where all of the changes end up being entirely positive, but, to find out for sure, tune into the premiere on April 19 at 10 p.m. ET on AMC.