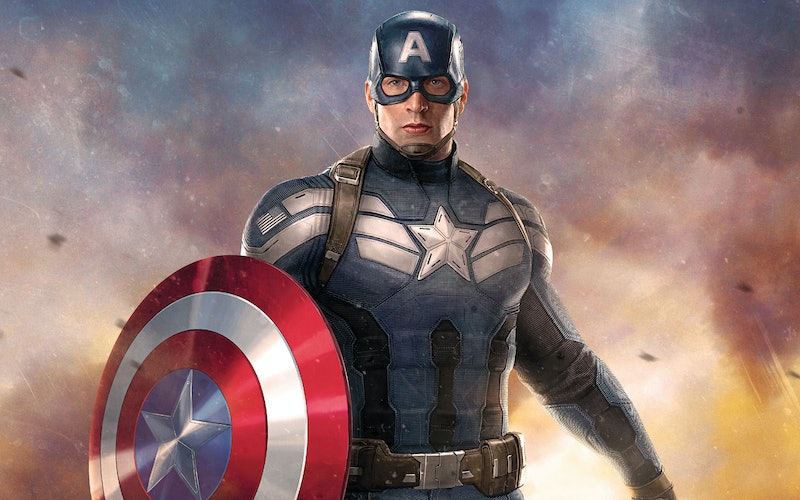 On May 6, a superhero battle of beyond-epic proportions will take place in Captain America: Civil War. The third Captain America film and next in a long line of Marvel adaptations by Walt Disney Studios brings Avengers and Avengers-adjacent heroes into a melting pot of superhuman powers and internal team friction. It's friend against friend as characters like Black Widow, Ant-Man, Falcon, Hawkeye and the Scarlet Witch take arms against each other as part of either Team Cap or Team Iron Man. This, as they say, is what it means to bring out the big guns. Established characters will be joined by newly introduced ones (Black Panther! The new Spider-Man!), and the anticipation is sending Marvel fans into a right tizzy. Obviously, the studio is hoping for a big opening. But will Civil War be the biggest hit of the year?

As you hopefully know, tickets for Civil War are already on sale online. (If you didn't, go! Get on that right now.) Advance ticket sales make it possible for the numbers people to predict how well a movie will eventually do in its first weekend. The information is especially significant in this case, since an event release like a comic book popcorn flick encourages audiences to secure their seats early. Of course, walk-up and last-minute tickets will be sold. And there are the immediate repeat viewers to consider — they might be buying more than one ticket in the weekend, if they like what they see.

The release of Civil War is still over two weeks away, but business forecasts are already being made. The Hollywood Reporter reported that Civil War is "tracking for a massive domestic opening of $175 million-plus." If the film stays in that immediate range, it will be number five with a bullet for North American opening weekends, behind Star Wars: The Force Awakens, Jurassic World, The Avengers, and Avengers: Age Of Ultron. Note that Civil War could make a bigger splash than any others in standalone Marvel series, including the other two Cap movies (2014's Winter Soldier came in around $95 million) and the Thor franchise (2013's The Dark World opened with $85 million).

What Civil War has going for it box-office-wise is more than just a packed slate of superheroes. Early reviews of the movie verge on rapturous. Variety's Justin Chang calls Civil War "the most mature and substantive picture" Marvel has made yet. In Slash Film, Ethan Anderton says it's "the kind of superhero movie you’ve been waiting to see your whole life." Laudatory notices like these bode well for the word-of-mouth spread and repeat ticket sales that will establish Civil War as a blockbuster with the quality to back up the buzz. This isn't a movie that's going to flame out after its theater debut.

With a major opening weekend predicted and the substance to go the distance, Captain America: Civil War is suiting up to possibly be the biggest box office success of 2016.

More like this
Everything To Know About The Musical 'Joker' Sequel – & Lady Gaga’s Role
By El Hunt and Sam Ramsden
Stephen Graham’s Wife Plays A Vital Role In His Career
By Emma Madden and Sophie McEvoy
Sky’s New Princess Diana Doc Tells Her Story Like It’s Never Been Told Before
By Frances Stewart
Every Horror Movie Reference In The 'PLL: Original Sin' Premiere
By Alyssa Lapid
Get Even More From Bustle — Sign Up For The Newsletter