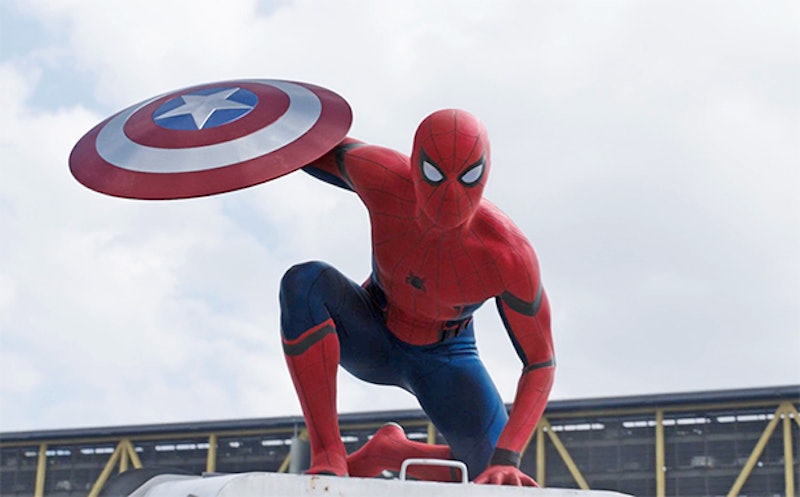 Have you recovered yet? If you're fan of the Marvel Cinematic Universe, then you are probably buggin' out over the new Captain America: Civil War trailer, featuring plenty of eye-popping action, angsty conflict… and HOLY CRAP YOU GUYS, IT'S SPIDER-MAN!!! The newest version of the web slinger, played by 19-year-old British actor Tom Holland, made his first official onscreen appearance in Thursday's trailer, and it's likely all that anyone's talking about. But when the furor surrounding your friendly neighborhood Spider-Man has subsided a bit, there are plenty of other burning questions the Civil War trailer raises. Questions like… is that character really dead?!

With literally a dozen superheroes, a handful of menacing villains, and even a few new characters — like Martin Freeman's Everett Ross — all promised in one movie, there is plenty here to unpack. (Fortunately, there will be plenty of time to do it, since Civil War will be Marvel Studio's longest film yet at 147 minutes, outstripping both Avengers movies.) But amidst all that flying and punching and civil warring and making out between Cap and Bucky (hey, a guy can dream, right?) here are the 12 most pressing questions that need answering, pronto:

1. Will General Ross Hulk Out?

William Hurt reprises his role as General Thaddeus Ross for the first time since 2008's The Incredible Hulk. Is bringing back a largely-forgotten character from that film just a clever way to tie the most obscure entry in the Marvel Cinematic Universe back into the larger franchise? Or is Ross' presence here more than mere fan-service? In the comics, the General eventually transforms into Red Hulk, one of Bruce Banner's chief antagonists. Is Marvel keeping an appearance by Ross' alter ego hush hush?

In the comics, the "Civil War" storyline begins when a villain, Nitro, explodes during a confrontation with some vigilante superheroes. The massive explosion kills a huge number of innocent bystanders, including 60 schoolchildren in a nearby playground. In the movie, that inciting explosion seems to have been moved from a schoolyard to some sort of United Nations-like assembly. But, who's being targeted here? And why? And, most importantly, by whom?

3. Has T'Challa's Backstory Been Changed?

The inciting incident of the Civil War isn't the only thing that appears to have been changed. While Black Panther in the comics is the King of the fictional African country of Wakanda, the character (played by Chadwick Boseman) makes his first appearance in the trailer crawling away from the explosion at the assembly in an expensive-looking suit. Has the M.C.U. changed T'Challa's backstory from a king to an ambassador?

4. What's Azkaban Doing In This Movie?

A forbidding black prison sitting isolated in the middle of the stormy sea? Seriously, it's like Azkaban, only minus the dementors.

5. Is Bucky Still A Villain?

The end of Captain America: The Winter Soldier hinted that Cap's childhood BFF Bucky Barnes would find himself on a path to redemption after working as the titular assassin for most of his life. But, perhaps that road will be a bit rockier than we all thought. Here, we see him pull the trigger of a gun in Tony's face, which — if it weren't for Stark's convenient glove — would have taken the billionaire's head off. Is Bucky still a murderer? Or was this simply self-defense?

The M.C.U. is known for its tendency to "kill off" major characters only to resurrect them later. (It's a long list: Bucky, Coulson, Fury, Groot, Loki, Pepper, to name a few.) But here we see Iron Man cradling a seemingly-lifeless War Machine. Is Colonel Rhodes really dead? You wouldn't think Marvel would spoil such a massive moment in the trailer, so I'm going with no; he'll probably recover by the end of the film.

Not only are heroes fighting each other on different teams, but they seem to be fighting each other within those teams as well. Here, Black Widow — who we know is #TeamIronMan — is seen telling her team leader, "I'm not the one that needs to watch their back" before striding away. Is she about to switch sides? In the comics, it's Peter Parker who's the hero caught between teams. Casual Marvel Studios fans know Natasha Romanoff a lot better than this new web slinger; could she be filling in that crucial role instead?

8. How Badass Is Black Panther?

TWe see him grappling with Bucky in several instance throughout the trailer; but while he seems to be able to hold his own against the Winter Soldier, how will he stack up against the likes of Scarlet Witch and The Vision?

9. What Is The Vision Afraid Of?

Speaking of those latter two superheroes… the android is seen here being subdued by the witch's supernatural powers. In Age Of Ultron, Scarlet Witch's weapon of choice was making the Avengers hallucinate their worst fears. Is that what she's doing to The Vision? If so, what is he seeing? What exactly is an Android's worst fear? And, even more importantly, will the M.C.U. remain faithful to the comics storyline where The Vision and Scarlet Witch fall in love and get married?

Seriously, the sight of tiny Ant-Man running along one of Hawkeye's arrows and jumping off of it onto Iron Man's outstretched arms is probably the single coolest visual in the entire trailer.

The "Civil War" comics storyline culminates when Steve Rogers is tragically assassinated by the villain Crossbones and a brainwashed Sharon Carter. After his presumed death in The Winter Soldier, Frank Grillo's baddie S.H.I.E.L.D. agent Brock Rumlow returns to Civil War as his alter-ego, Crossbones. Why would they bring him back if it weren't to play out his character's most famous storyline, bringing about the death of one of Marvel's most famous villains? Perhaps Rhodey's "death" is being advertised so heavily to distract from who the real casualty of the film will be.

12. Will The New Spider-Man Live Up To The Hype?

The Civil War trailer doesn't give the new Spidey much time to do anything other than swoop onto the screen, grab Cap's shield, and say "Hey, everyone," — as much to the eager audience as to the assembled heroes. This brief introduction leaves more questions than answers: Will this newest version of Spider-Man be faithful to the comics? How will Tom Holland's performance stack up against Tobey Maguire's and Andrew Garfield's? Will he look good in action? Will he get lots of funny one-liners?

Sadly, this is likely the most of the web slinger we'll see until Civil War muscles its way into cinemas this May.