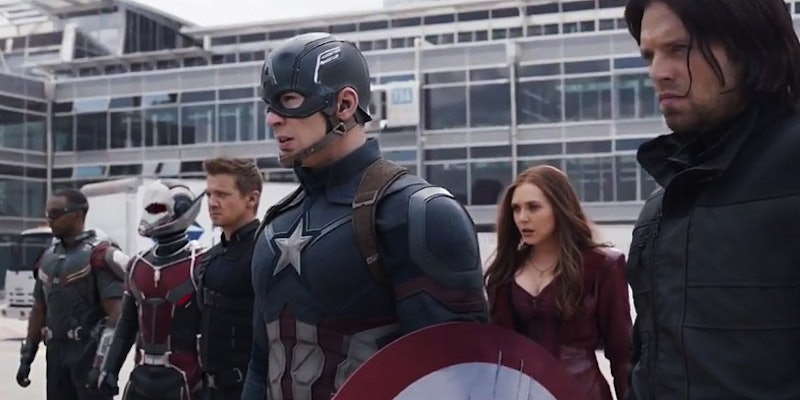 Marvel is pitting their fans against each other. By asking people to declare whether they're Team Iron Man or Team Cap ahead of Captain America: Civil War, the company is causing audiences to take a look at the issues at hand and decide which hero they agree with. Is Team Iron Man right? Or is Team Cap right in Marvel's Civil War? In order to make an informed decision, one must first figure out what it is exactly they're fighting about.

Judging from the trailers and what's known about the film so far, there are essentially two issues that drive a wedge between Iron Man and Captain America. The first has to do with Bucky Barnes, AKA the Winter Soldier, who is a wanted criminal but is also Cap's long lost best friend. Bucky was brainwashed while committing his crimes, so Cap believes he should be exempt from punishment. Iron Man sees him only as a criminal. This issue is more personal than the next, larger issue, but even so, I'm going to have to side with Team Cap. The Winter Soldier was a bad dude, but the people who deserve to be punished are the ones who made him into the assassin he became, not the person who committed the crimes unknowingly.

Personal issues aside, however, there is a much larger bone of contention between Team Cap and Team Iron Man, and that is the Sokovia Accords. The Accords are a set of internationally-ratified documents that call for the registration and regulation of superheroes for the use of military/law enforcement. Under the Accords, the Avengers and other superpowered individuals would no longer be able to operate freely (i.e. save the world), and would instead be subject to government oversight, needing permission and/or instruction before acting.

The Accords are named after the nation of Sokovia, which took heavy damage in the battle between the Avengers and Ultron in Avengers: Age of Ultron. After this event, and other large-scale battles involving superheroes, the decision was made by the world's governments that superheroes were too dangerous to leave unchecked. And that's what the real argument in Civil War boils down to. Iron Man, who feels responsible for Sokovia since he created Ultron, agrees with the Sokovia Accords, and wants the Avengers under government jurisdiction. Captain America, on the other hand, doesn't believe he should need permission to intervene on behalf of people who need help. He also likely has some mistrust in authority following the events of Captain America: The Winter Soldier, where S.H.I.E.L.D. was revealed to have been infiltrated by HYDRA at the highest levels. So whose team do I side with?

I'm going to have to go with Team Cap. Although I would probably agree with Iron Man in the real world, the world of the Marvel Cinematic Universe is a different place entirely. Just imagine if the Avengers had to wait for permission to save New York from alien invasion. There would be several levels of government an ordinance would have to pass through, the bill would probably be hung up in Congress because some House member would want to tack something onto the bill, and by the time the Avengers were finally granted permission to act, aliens would have already taken over the world. No thanks. The Avengers are a unique group, and are therefore uniquely suited to saving the world. So I agree with Captain America: Let them do their job.