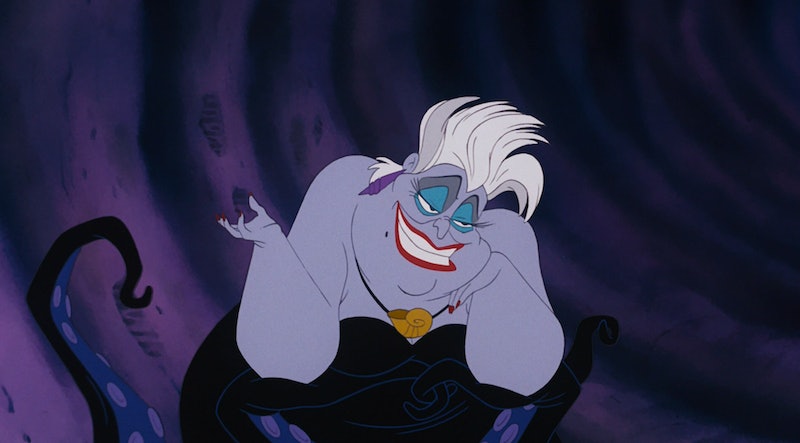 Like many other people, my most-loved film as a child was The Little Mermaid. Whenever Ariel was on screen, I would sing along with blind enthusiasm until my vocal chords — what's the word? — burned. I'd baby-cackle at the French chef as he chased around Sebastian and felt a deep surge of emotion as she Ariel hugged her father goodbye at the end of the movie. When Ursula, the story's big bad, took to the screen, I would run behind the entertainment center and cover my eyes, a fact my mom loves to remind me about whenever she gets the chance. At 25, however, I no longer hide from the villain — and in fact, I've come to think that Ursula is actually the hero of The Little Mermaid .

Well, perhaps anti-hero is a more fitting title. In a TV era full of Walter Whites and Tony Sopranos, the anti-hero is almost always male, a guy who makes evil or violent choices for what seem like the right reasons, earning street cred and acclaim from viewers. I can count the number of female characters in film and TV who fall into the category, however, on one hand. Yet when revisiting The Little Mermaid as an adult, I realized that Ursula is one of the few examples of a female anti-hero I encountered as a kid, and a character I will now always cheer for. Here's why.

For those of us who identify as curvy, delicious, and/or fat, the world can be a tough place to navigate. We live in a culture that's always telling us to shrink ourselves, to occupy smaller spaces, and to stay in constant warfare with our bodies. Ursula, though, would have none of that. In The Little Mermaid, she basically gives those ideas the bird and takes up as much damn room as she wants. Take a cue from her next time someone's telling you're too big or tries to invade your personal space on the bus.

2. Her Character Is A Work Of "Divine" Intervention

When Disney's animators first drew up sketches for Ursula's character, the looked to John Waters' frequent collaborator, Divine, according to the AV Club. If you're not familiar with this drag queen powerhouse, check out Female Trouble or I Am Divine, a biographical documentary about the performer that's on Netflix right now.

3. She Manipulates The Patriarchy To Her Advantage

Ursula basically flips sexism on its side and uses it to survive. While there are unethical qualities to her crafty practice, she also knows an anti-woman chump when she sees one and basically uses Ariel's internalized sexism to get what she needs.

4. And She Attempts To Smash The Patriarchy

Seriously, is there anything more glorious than the image of Ursula laughing as she rises out of the water with that crown and trident?

5. She Understands — And Uses — Her Sexuality

This gal doesn't underestimate the power of body language and shimmies all over the darn place. Next to Ariel's doe-eyed naivety, Ursula feels sexually aware and in control.

6. She Doesn't Try To Be A Part Of Anyone Else's World

Girl lives alone, out in the darkest depths of the ocean, and does her own witchy thing. 10 points for the coral coven!

There's no pulling a fast-one on this gal. If you make a pact with her, you're going to hold up your end of the deal or else. In many respects, her sense of self-worth is admirable.

Just Ursula hanging out, slaying in some bomb red lipstick.

Ursula dies trying to assert her power over a king, his princess daughter, and the prince she's gonna get with. It's actually a tragic ending, if you think about it.

Disney may have given Ursula behaviors and attitudes that deviated from conventional femininity in order to make her a more believable villain, but in the process, they also gave viewers one heck of a feminist anti-hero.