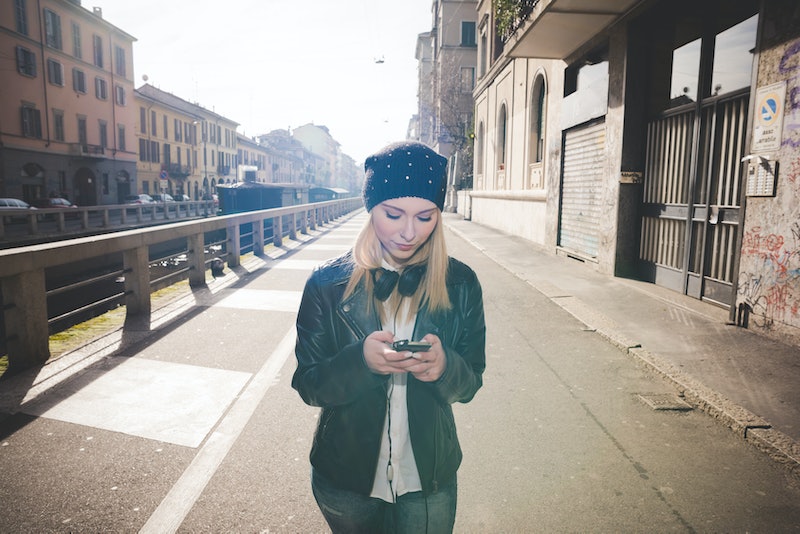 Happn has gotten a lot of buzz in the past year or so. But just like any other dating app, plenty of us make online dating mistakes on Happn, so I asked Marie Cosnard, Happn’s Head of Trends, to elucidate how best to avoid such pitfalls. Many of us know that dating apps can work to our distinct advantage if we use them properly — and they can be hugely frustrating if we don't learn the tricks of the trade, as it were. Plus, Happn is GPS-based, so your potential matches are people you've literally crossed paths with, which makes it possible to connect with others in a totally different way in comparison to apps such as Tinder, OkCupid, Hinge and the like — but also provides a whole Pandora's box of possibility.

The bottom line is that dating online is many things rolled into one: awesome, difficult, strange, painful, fun and ultimately can lead to finding lasting and real love. But to do so takes a lot of patience, usually, and a bunch of luck, and, you know, some fate sprinkled in there for good measure.

Here are 10 things women can do to improve their experience on Happn, according to Cosnard, who knows a thing or two about navigating the dating app. But first, check out Bustle's episode of "I Want It That Way" featuring Cosnard:

"Some users tend to focus a bit too much on small details," Marie Cosnard, Happn’s head of trends, tells Bustle. "For example, a user will like a guy just because he’s wearing a dope sweatshirt, but will dismiss another guy for his hairstyle." I would love to say that none of us have ever been guilty of that, but let's be real: With photo-based dating apps (aka all of them), it's all too easy to banish someone based on completely superficial details that you would likely overlook in real life.

The same is true of things you might skip over or roll your eyes at IRL: a dope sweatshirt might be yawn-worthy at a party, but maybe it can get more play on a dating app, where everything is more heightened in this weird way. "Details are important, but we want our Happn users to try to be more open-minded," Cosnard says.

2. Not Making The First Move

"There are still [heterosexual] users out there that believe in the social convention of men making the first move," Cosnard says. "Well, what if the guy is great, but is a little shy? It’s 2016 and women should feel empowered to take the radical first step in dating — and beyond." True. The same is true if you're seeking a woman. Even if you're the shy one, you're on a dating app, so you have very little (actually, nothing) to lose. So reach out to someone who looks smart/cute/interesting/lovely, and see what happens. If you sit around waiting for someone to ping you first, you might be waiting for a very long time.

"Happn users can soup-up their profiles by syncing it with Instagram," Cosnard says. But if you skip this step, you're missing out on a potentially important connection point. How it works, she says, is simple: "Thirty recent pictures from a user’s Instagram feed will appear directly in their profile, giving others added insight into who they are — a foodie, a sneakerhead, someone who loves to travel, a gamer, etc." That way, you can convey things about yourself that you might not be able to easily do in your basic profile.

4. Opting Out Of Using Spotify

"Last summer, we coupled with Spotify to help our users meet through their shared love of music," Cosnard says. "The in-app profile integration allows our users to send tracks to each other, as well as add songs to their own profile to express their own musical interests, whether it be Drake, The Weeknd, or Sia." We all know that music is an amazing way to vibe with someone, so if you're not meeting fellow music fans at concerts or other shows, you can still find them on Happn, using Spotify as a bridge.

I know, I know, it's hard to settle on the perfect melange of profile pics: You don't want to appear stuck-up or basic, but you also don't want to go too wild and crazy, and selfies are typically a no-no, which means that you're left with … like, two acceptable pics. Cosnard has some thoughts on this matter, though. "While a traditional straight-into-the-camera headshot with a big, warm smile is always good, we suggest that our users try to show some personality in their profile pics, such as active shots that capture doing something that truly interests them," she says. She notes that authenticity is everything — "Real is really in!" — and says that setting a photo shoot at the magic hour is wise. "Good lighting is key," she says. "Also, a full body shot is recommended. Don’t obstruct your face, like with sunglasses. Steer clear of selfies. Oh, and try to upload at least three varied pics."

6. Oversharing In A First Message

"Don’t be boring. Don’t overshare. Don’t pretend to be something that you're not. Also, keep the cheese-factor to a minimum," Cosnard says. That said, don't just say, "Hi there," and wonder why they don't respond. "We recommend saying something a bit more bold than the traditional 'Hi,' 'Hello' or 'Hey,'" she says. In other words, land something in between the overshare and the undershare. Which brings us to …

7. Snoozing On A 'Geographical Ice-Breaker'

Since you can see when you're near a match, you might as well make the most of that and talk about it in the app. "Happn offers a natural geographical ice-breaker with our crossed paths functionality," Cosnard points out. "Two users automatically have a built-in shared interest: The space they occupy."

So, she suggests, try saying something like, "Have you tried that new bar on Houston Street? Want to try it with me sometime?" Or, "What do you think of that coffee shop on Fulton? I was there today, and I see you were nearby, have you been?" That way, you're pulling a two-birds, one-stone move: Creating a conversation opener and possibly a first date at once.

8. Avoiding Happn Because Of The GPS Function

I know some people are wary of Happn because of the GPS function, but it seems as though that's not a valid concern, according to Cosnard. Though some have suggested the app could be "a stalker's dream," that's just not so, Cosnard says, for a couple of reasons. "Another user can never make contact with you unless you’ve chosen to 'Heart' them," she says. "If you don’t want another user to happen upon you, you can select the 'X' button, and you won’t cross paths again on Happn." One would hope that you would only "Heart" users who do not happen to be stalkers, but if it turns out that you've hearted a weirdo, you can block them, she says.

9. Avoiding Dating Online Via Happn Because Of Safety Concerns In General

"Safety was one of the core pillars of our thinking when we built Happn two years ago," she adds. "When you are in close proximity to another user, we note that 'You are less than 800 feet' — it’s a radius, and your exact location is never flagged on our static in-app map. It is simply impossible to track another user’s whereabouts." So another user can't show up in real time and find you — necessarily.

All of that said, it depends on where you're using the app. In NYC or other huge cities, 800 feet is a pretty big radius. But elsewhere, especially in less-populated areas, it could be rather small. As with any dating app, use caution — but don't shy away from Happn because you feel sketched out by the GPS feature, especially in a big city.

10. Forgoing The Usual Caveat Of Meeting In A Public Place

Everyone who has ever written about dating online has touted the importance of meeting for the first time in a public place, but for the cheap seats: Be sure to make your premiere match hang happen somewhere crowded, "preferably in [a] busy public place," Cosnard says. As to how quickly you should take it to IRL, that's up to you, she says.

"All users — both women and men — should move at their own pace," she says. "We recommend chatting within the Happn app, along with making use of our voice feature that allows users to record a one-minute audio clip of themselves. That’s typically followed by texting, a couple of phone calls and, lastly, an in-person meet-up."

This doesn't have to occur un in five seconds, though common dating-app thought is that you should meet sooner rather than later. Basically, communication is what bridges the gap between first seeing someone’s profile and connecting in real life.