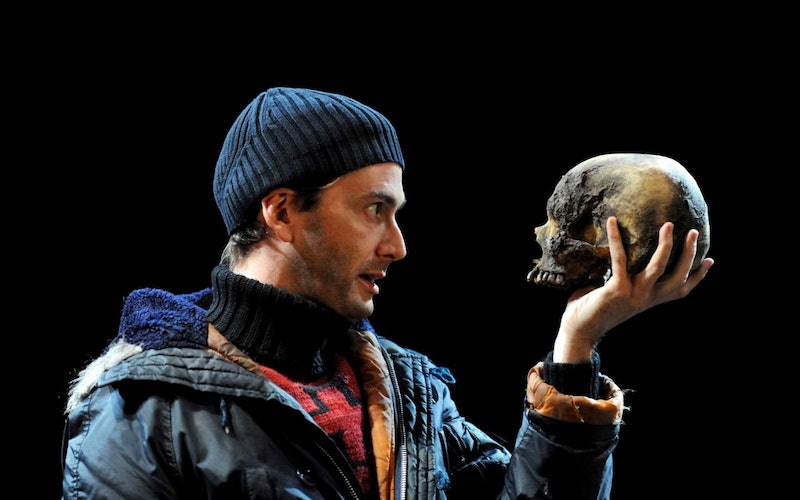 Goodreads celebrates this year's Shakespeare Week with six deleted scenes from Shakespeare, written by your favorite authors. The six writers cover some of the Bard's most popular plays, including Julius Caesar, Hamlet, and The Tempest. But, of course, some of the authors get a little ... creative ... with their submissions.

Take Something Rotten author Jasper Fforde's deleted scene from Hamlet . He begins by musing on some bad first drafts of the 1603 play:

The 'Frightfully Bad' Quarto, for instance, featured Hamlet with the now notorious 'Scooby Doo' ending, where King Hamlet turns out to be Fortinbrass simply pretending to be a ghost in order to divert attention away from his pending invasion. It finishes with the line, now much paraphrased: "And were it not for these children of meddlesome countenance, this crown would be mine.'

Of lesser interest still is the fragmented 'Die Hard Quarto' which features Hamlet visiting Elsinore castle to reconcile with Ophelia, only to find the castle overrun with 'A foul and pestilent congregation of evilness' led by Polonius' estranged brother, Hans Gruber. Thankfully the play is now lost except for fragments of the 'Now I have a rapier Ho Ho Ho' scene. As a minor aside, the play features the first known usage of the exclamation: 'Yippee Ki Yay, Bull's pizzle'

If you don't laugh at that, I'm going to make you watch Romeo and Ethel, the Pirate's Daughter until you get it.

Fforde then arrives at his funniest take on Hamlet yet: The Comedy of Hamlet, Prince of the Zombies. The reanimated Dane attempts to bring back his dead family and friends — including his drowned girlfriend, Necrophelia — and plans to reseat his undead father on the throne. Today, the "to not to be, or to not to not to be" soliloquy and musings on "something rotten" are all that survive of Hamlet's Prince of the Zombies incarnation.

Canadian author Margaret Atwood's latest book, Hag-Seed, reimagines The Tempest . Her deleted scene from the play is an alternate opening, one that turns into a domestic comedy between Prospero, Miranda, and Caliban, in which the latter plays the conniving wizard's feisty cook.

Nerds will more appreciate Goodreads' other take on The Tempest, this one from Ian Doescher, author of the William Shakespeare's Star Wars series. He gives us the 67 lines that come before Act I, Scene II, Line I, in which Miranda begs Prospero for a story, and gets the tale of two warring religions in return:

Prospero: So shall it be, Miranda. Pray, attend: Full many years—e’en centuries—from now, There shall arise, upon the riven Earth, Two varied faiths, each with their own beliefs. The first shall be a people who profess To know a history of long ago,Within a galaxy far, far away.These shall give worship to a sky walker—No god, indeed, but man of valor brave,Who fought the darkness and o’ercame its pull, Who, high above the stars, did find his fame,Who first was student, then a teacher wise.This sky walker shall stir devoted soulsUnto obedience beyond belief:To see him, they would wait for hours and days, Array themselves as him an ’twere they couldBy imitation hold him closer still.These, then, are the adherents of the first.

Miranda: O, father, then how strange the Earth shall be!What of the subsequent religion, Sir?

Prospero: I come anon to them; with patience, wait.The second group believe that on the Earth,E’en further centuries beyond their time,Shall rise a star fleet with a mission just,As follows: to explore some strange, new worlds, To seek new life, new civilization,To boldly go where none have gone before.These people shall give faith unto a kirk:A kirk rais’d in a humble native land,A kirk who ris’d unto a lofty height, A kirk who did command profuse respect.

Miranda: Two odd and errant systems of belief.I bid thee, tell me father, who prevails?Those who are bound unto the sky walker,Or those who bow unto the mighty kirk?

Prospero: My dear, e’en one as powerful as ICannot see how this star-cross’d tale shall end.The question, thus, unanswer’d doth remain,An ’twere a person hanging on a cliffNot knowing what next scene their fate shall write.

For more fun deleted scenes from Shakespeare, check out the authors' posts at Goodreads. You can write your own alternative takes on the Bard in the website's comments section, and share your favorites on Twitter, using the #ShakespeareWeek hashtag.