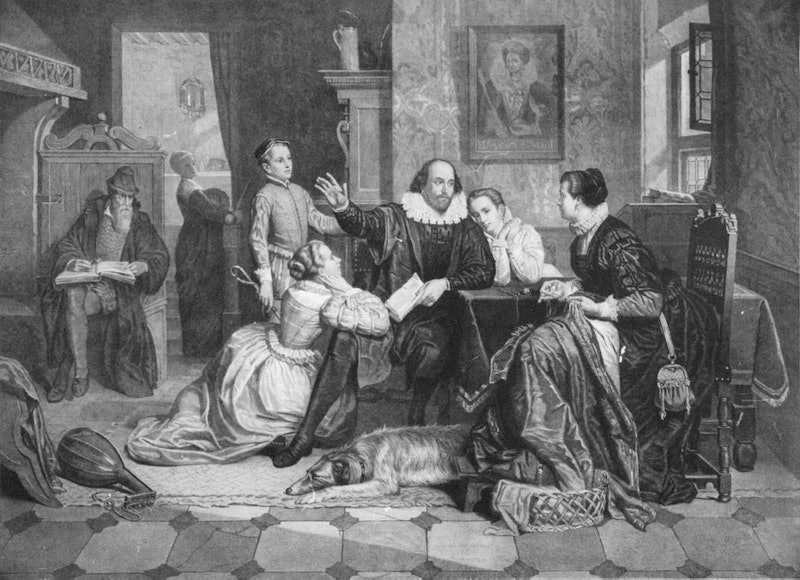 When people think of Shakespeare, they probably think of actors talking to skulls, cross-dressers falling in love with each other, and being confused in high school English class. They might not think of him as a husband, father, and all-around human being. But it's true: Will Shakespeare may have written love poems about Dark Ladies and handsome men, but he was married to his wife, Anne Hathaway, for his entire career. So if you're wondering about the woman behind the Bard, here are ten things you might not know about Anne Hathaway (and no, not that Anne Hathaway).

There's a lot of mystery surrounding Shakespeare's life. We don't know what he did between the ages of 13 and 18 (probably hung around parking lots or sat in his room feeling angsty), we don't know what happened to his two lost plays, and we don't know that much about his wife. We don't even know if he and Anne Hathaway wanted to get married. Nowadays, as the wife of a celebrity, Anne would have her own reality show, emoji pack, and scent line, at the very least. But back then it seems like she mostly stayed home in Stratford and raised Shakespeare's kids while he ran around being artsy.

But there are a few juicy details that we do know about the Shakespeare family, so here's what we can piece together about the original Anne Hathaway:

1. Their marriage was… rushed

William Shakespeare and Anne Hathaway got married in late November of 1582, and their first child was born in May of 1583. And no, you're not doing that math wrong—Anne Hathaway was already several months pregnant when the two got married. Whoops. A child out of wedlock would have been a huge scandal to the uptight people of Stratford-upon-Avon, so William and Anne probably didn't have much of a choice in the matter.

2. She was almost an "old maid" when they got married

Anne Hathaway was 26 and William Shakespeare was 18 when they got married. The age difference would have been significant at the time: 26 was nearing "old maid" territory (and not getting married was just not an option for the ladies). Eighteen, however, would have been considered young for a man to get married, since the age of consent was 21. So Shakespeare was technically a minor when they got hitched, and Anne was getting up there at the ripe old age of 26.

3. We don’t know if they really wanted to get married or not

They obviously hooked up at least once before the wedding, but scholars disagree on how into each other Anne and William were. On the one hand, it looks a lot like a shotgun wedding, and they had a pretty hasty ceremony. On the other hand, we have no proof that they weren't planning to get married (secretly pregnant brides were pretty standard in Elizabethan England). Shakespeare's family business was floundering at the time, and the Hathaways had good finances and social standing, so the marriage definitely didn't hurt his image. But we can't know if they got married out of love, gold digging, or pregnancy panic.

4. Shakespeare may have been dating two different Annes

There's some shady marriage documentation that lists "William Shagspere" as engaged to "Anne Hathwey" and "Wm Shaxpere" engaged to "Anne Whateley." Was this just a clerical error? Or really atrocious spelling? Were there two Annes in the mix? Did Shakespeare get pressured into dumping Anne Whateley to marry the knocked up Anne Hathaway? Chances are the clerk just got her name wrong the second time (spelling wasn't really a thing back then). But there's always the slight possibility that teenage Shakespeare was getting Annes into trouble all over the place.

Anne Hathaway probably couldn't read. At least, as a girl with seven younger siblings, it's highly unlikely that she ever went to school. It is possible that she was taught to read a little by her parents, and that she knew just enough to study the Bible. Or, if you're a romantic, you can imagine that William taught her to read at some point in their marriage so that she could appreciate his poetry. It almost definitely didn't happen, but it's cute, right?

6. The Shakespeares had three kids

Susanna was born six months into their marriage, and two years later, Anne delivered twins: Judith and Hamnet (and yes, "Hamnet" is a variation of "Hamlet"). Shakespeare peaced out to London to start his acting career at some point after the twins were born, and Anne stayed in Stratford with the kids. Shakespeare visited his family periodically, but London to Stratford was not the easiest commute, so Anne was probably flying solo as a parent most of the time. We have to imagine that the Bard missed a lot of the Elizabethan equivalent of little league games.

7. ...but only two kids made it to adulthood

Little Hamnet Shakespeare died at age eleven, probably of Bubonic Plague. At the time, about one third of children died before the age of 15, but it was still devastating to the Shakespeare family. It might not be a coincidence that Shakespeare's plays written after Hamnet's death deal with the loss of a son (King John), a girl grieving for her twin brother, only to discover that he's not really dead (Twelfth Night), and, well... Hamlet. There's no record of how Anne dealt with the loss, but it must have been a dark time for her as well.

8. William was probably not the best husband

In addition to hardly ever being home and not helping out with the kids, there's a good chance that Shakespeare had affairs in London. His sonnets profess his love for a mysterious Dark Lady, as well as a (male) Fair Youth. One friend of a friend wrote in his diary about the time that Richard Burbage, Shakespeare's friend and the lead actor in Richard III, was planning a tryst with a female fan. When Burbage got to her room, he sent in a note saying that "Richard III" had arrived. William Shakespeare had beat him to it, however, and he sent back a note saying that "William the Conqueror was before Richard III."

9. But William might not have been the worst husband

No matter what Shakespeare was getting up to in London, he retired and moved back to Stratford in 1610. Historians like to speculate that he and Anne totally resented each other, but once he made his fortune, he chose to move home and hang out with his wife and daughters rather than stay in London and live it up. By this point, Anne was living in a swanky new house, her husband was finally home, and she had an adorable granddaughter. Life was pretty good for the Shakespeares. (Except that their youngest daughter, Judith, accidentally got herself and her husband excommunicated from the church and then her husband's mistress died while giving birth to his illegitimate child. But no family is perfect.)

10. Shakespeare only left her his second best bed

The only mention of Anne in Shakespeare's will is "I give unto my wife my second best bed." That's it. That's all he left her. Not even his best bed. It sounds pretty harsh, and a lot of people use that line to prove that Anne and William had a frosty relationship. But under the law, Anne would automatically inherit one third of his wealth, so he didn't need to put that in his will. The will was mostly to divide up the rest of his estate between his sister, daughters, and friends. And the "best bed" in the house would have been the guestroom bed—the "second best bed" was their marriage bed. So it might not have been a middle finger to Anne so much as an intimate gesture.

More like this
Constance Wu On Self-Doubt, Family Drama, & Her Sister's Unwavering Support
By Constance Wu
Alan Rickman's Diary Reveals Why He Considered Leaving 'Harry Potter'
By Darshita Goyal
Everything Prince Harry Is Likely To Address In His "Wholly Truthful" Memoir
By L'Oréal Blackett and Sophie McEvoy
Craig David Is Still Slicker Than Your Average
By Olivia-Anne Cleary
Get Even More From Bustle — Sign Up For The Newsletter