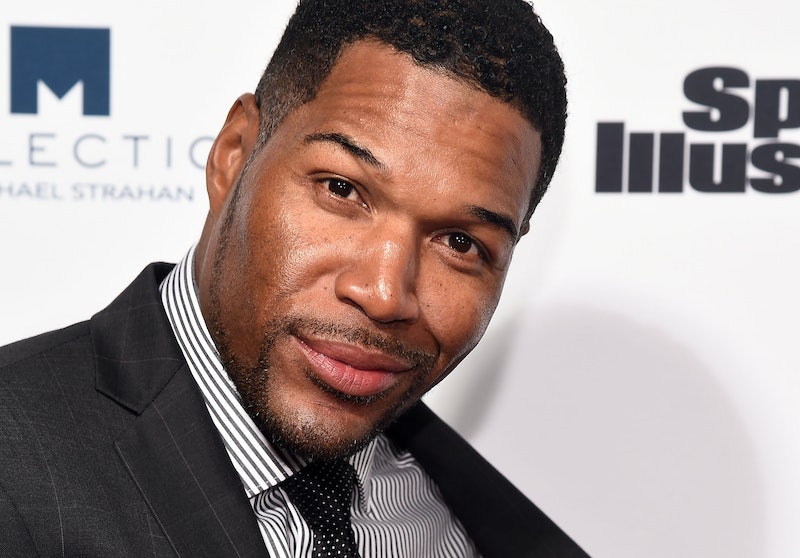 Fans of Good Morning America will be pleased to hear this news, while fans of Live! will... not. According to TVLine, Michael Strahan is leaving Live! With Kelly and Michael to pursue a full time spot on Good Morning America, where he currently appears twice a week. But don't get too upset. You can expect to see Strahan all the way until September, when he will officially leave Live!, and begin his gig at GMA. So you have at least a few more months to enjoy his smiling face — next to Ripa's, that is — with your morning cup of coffee. After that, you'll need to get your Strahan fix in by tuning into GMA. Even though his departure from the show has just been announced, I'm curious to know who will fill that empty seat next to Ripa. In other words, who will replace Strahan on Live!?

After Regis Philbin left the show, Strahan joined Live! back in September of 2012. Before taking Philbin's coveted spot, Strahan made a name for himself as a defensive end for the New York Giants. Since then, he's become a sought after morning talk show host and sports news anchor. Strahan started appearing regularly on GMA in 2014 — two years after he made his morning show debut with Ripa.

Strahan has only been with Live! for a total of four years, which isn't that long compared to Ripa who was been on for 15 years, or Philbin, who was a co-host from 1983 to 2012. But not to worry. This change doesn't point to any impending doom for Live! In January, the show was renewed through 2020, which means that producers will need to start searching for Ripa's new co-host soon — if they haven't already. Here are some ideas for who could replace Strahan.

Back when Live! was auditioning Philbin's replacement, Ripa brought on a ton of celebrities to co-host with her. The first of those was Jerry Seinfeld. He's a comedic legend, so I would not complain if he got the gig.

Now that The Soup is off air, McHale's schedule has opened up. His quick wit and sardonic view of pop culture could balance out Ripa's bubbly personality well.

How great would it be to see a female take the gig? Deeley already has experience hosting So You Think You Can Dance? Her light-hearted humor would match with Ripa's.

Jonas co-hosted with Ripa back in 2012, and did a phenomenal job. It would be interesting to bring in Jonas's perspective, as he's only 28.

These two both have the same kind of spunk and upbeat energy. Plus Hough can always get up and dance at random intervals — and that would be great.

Following in the shoes of Strahan, Bush would bring the same kind of football hero energy that worked so well for the show. Plus, Bush has already co-hosted with Ripa, back in 2012 as well.

I mean, I know he's pretty busy with his approximately 7 million jobs on Bravo, but come on! This would be the dream team.

No word has officially been announced regarding Strahan's replacement, so we'll all just be on the edge of our seats until that happens. Oy.