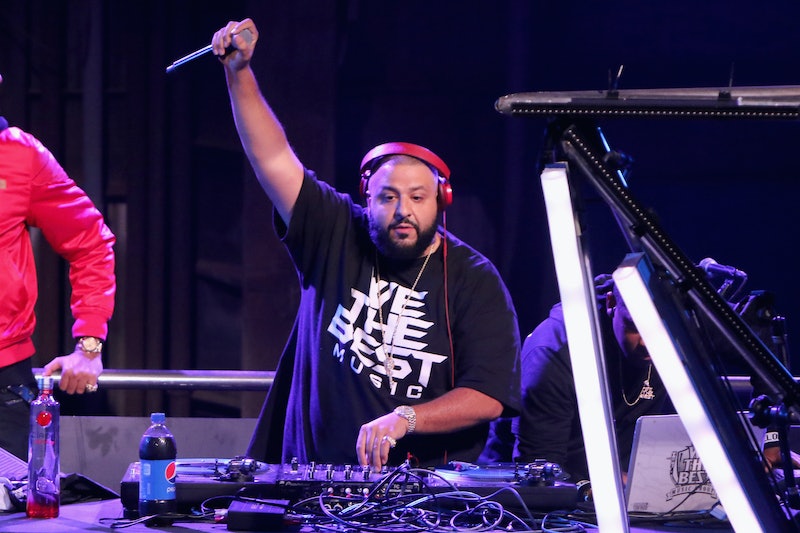 With not long to go until Beyoncé goes on tour, the excitement is getting real. On Tuesday, that excitement multiplied when it was announced on Instagram that DJ Khaled will join Beyoncé on The Formation World Tour , and it seems that no-one is more excited than he is. In a super long message posted alongside a video of the DJ smoking a cigar (celebrating in style), DJ Khaled shared his appreciation and awe at being chosen to go on tour with the superstar. As he said, "I proudly announce a major milestone in my career. Today's announcement is a major accomplishment in my life." Basically, just getting tickets to The Formation World Tour would be a major accomplishment in anyone's life, let alone actually performing on the same stage as Beyoncé, the Queen herself.

One of the reasons that DJ Khaled's announcement that he will join Beyoncé's tour is so awesome is that his message is downright gracious. Along with immense gratitude and humility, DJ Khaled said, "I want to thank the incomparable icon Beyoncé for this tremendous opportunity of a lifetime." The record producer is so humble in his Instagram post, and clearly can't wait to join Beyoncé on tour, which makes him so relatable. With phrases like "I promise you this! I'm gonna rip it down so legendary!!!!!!" it's clear that DJ Khaled is every bit as excited about The Formation World Tour as the rest of us, and is going to enjoy every second of it.

DJ Khaled took his Instagram announcement as an opportunity to reflect on his career so far. He said, "When I was a kid THEY told me no when I wanted to DJ and perform in the club! So guess what, I did!!! OPEN FOR BEYONCÉ!!!!!!" That the music producer and DJ was once so used to rejection makes it all the more satisfying that he has been given the amazing opportunity to support Beyoncé on tour. His honesty is what makes me root for him, and shows that hard work really does pay off.

The artist also used the announcement as an opportunity to remind his fans that "the album soon come," meaning that his appearance as a support act on The Formation World Tour will be followed by a new record. If you're lucky enough to have Beyoncé tickets, then you might get to hear some new work from DJ Khaled.

Either way, he suggests that fans, "Get ready to feel passion pain success and tears of joy in a STADIUM NEAR YOU!!!!!" What more warning could you need? The Formation World Tour is right around the corner, and hearing that DJ Khaled is joining Beyoncé on stage makes me even more excited than I was before.