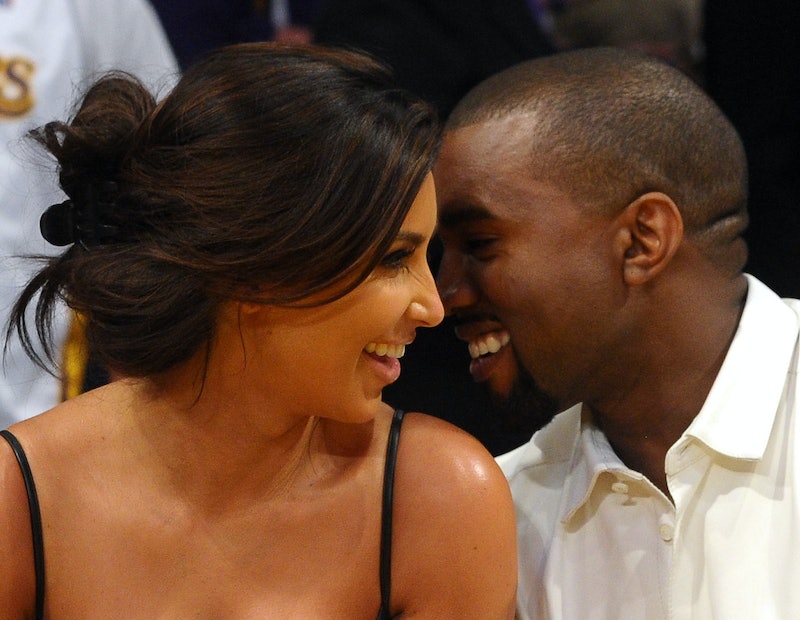 In the final episode of Kocktails with Khloé, Kanye West revealed something pretty surprising: Apparently, Kanye West didn't have a cell phone until 2011, and he only got one then to taunt Kim Kardashian about her pending nuptials to Kris Humphries. I know — it's pretty bizarre considering the fact that West has always been at the forefront of technology and seems to be very up on trends, but this is what he's claiming. In a promo clip for the show's finale, Khloé says that West "used to never have a phone," and West agrees, saying he didn’t get a phone until "somebody decided they wanted to marry Kris Humphries." If that's the case, there are definitely some things that West missed out on when he was off living his digital-free life.

Reports surfaced showing West with a cell phone in hand pre-2011, which seem to conflict with his statement, but maybe he just gave up his phone temporarily or didn't have one often. In fact, none other than French Montana, ex-boyfriend of Khloé, told Vibe in 2012 that he "always thought it was brilliant for Kanye not to have a phone." He added, "I feel like at times I don’t want no phone, either. If you are at a certain level like Kanye is at, most of the people who are calling your phone, are people who are going to ask you for something, negative energy."

Kim herself has also backed this up, telling Paper magazine in 2014 during her infamous "break the Internet" shoot that West "didn't have a phone for four years." That honestly makes it that much funnier if he welcomed technology back into his life solely to lure Kim away from Humphries — which we all know apparently turned out fine eventually, given that the two started dating after Humphries and Kardashian divorced in 2011. So, if there truly was a time when West didn't have use of a cell phone, it's likely that he may have missed some iconic early social media moments of his now-wife. Let's take a look back on what West might have missed out on.

Proving that nothing ever really changes, Kim posted a kiss-face selfie as her first moment on the site. Because, of course.

Sorry, fakes. This is the real deal.

Did I mention some things never change?

The Balmain-clad, Givenchy-lovin' fashion icon of 2016 would literally never ask this question.

As we've seen on Keeping Up With the Kardashians, Kim is never without her cell phone, except back then it was a Sidekick. As you do.

I wonder if she still wears a retainer...

While her L.A. peeps wanted to sit at VIP tables ~in da club~, Kimmy simply wanted to watch YouTube videos by herself.

Kim's clearly always been a fan of other cultures.

The creator of Kimoji used to emote via text using BBMs. Sigh.

Haven't we all? LOL.

Of course, nowadays, Kim's social media game is much more curated and branded, but honestly, not much has changed, per this recent tweet:

The only difference is that 'Ye will now see it all over his feed, as she's the only person he follows on the site. If it were anyone else, this might be creepy... but let's remember who we're talking about here. The guy who got a cell phone to lure his lady. They're a match made in BBM blushing face heaven.