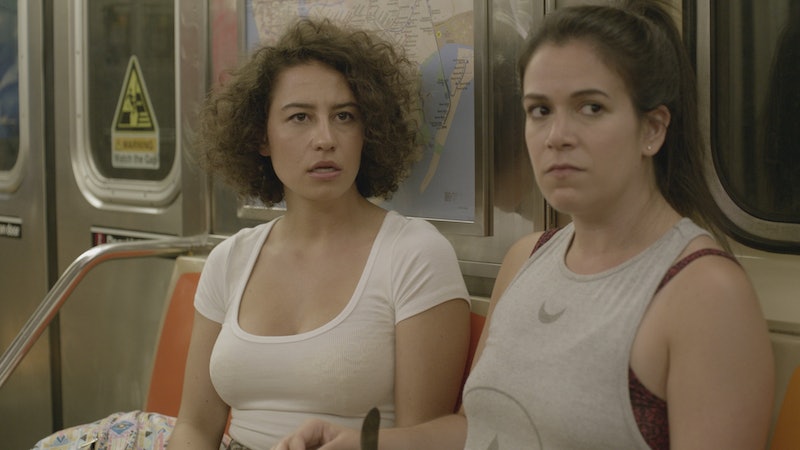 Comedy Central's Broad City is currently one of TV's truest, realist, and wackiest representation of what it's like to be a young woman in these modern times. In the hit show's third season, Ilana Glazer and Abbi Jacobson have totally nailed covering issues like sexual empowerment and reversing gender norms in relationships — and there's so much more to explore, even after Wednesday night's season finale. So when will Broad City Season 4 premiere with more spot-on humor and observations about women's issues? There's been no exact date announced by Comedy Central yet, but if past seasons are any indication, fans will be getting more Ilana and Abbi next winter.

Along with that will come the exploration of lots more issues facing the 2016 woman, Broad City writer and director Lucia Aniello tells Bustle at the Tribeca Film Festival. "We're but a link in a long chain of women's issues that we have to deal with, and I think there's plenty for women to still be working against and plenty of jokes to be made about it," she says. "We're really trying to present the girls' lives as we or they experience them in their early to mid 20s ... As you grow up, different problems present themselves, whether it's family stuff or just how to grow up as a woman these days, so I feel like [there's] kind of, like, never-ending things to tackle."

And, so far, Broad City has been spot-on about so many women's issues.

Laugh all you want, but this is a women's issue. Many women are ashamed of acknowledging bowel movements (a totally natural occurrence) or refuse to poop at work because they're embarrassed. What's so refreshing about Abbi and Ilana is that they're not ashamed — and even when Abbi is a little bit, none of the other characters mock her for it. Remember when she farted at the doctor's office? He was totally cool with it. And, when Abbi later admitted to crush Jeremy that she took a dump and it mysteriously ended up in a shoe, he didn't shame her for it. In fact, Bevers thanked her for taking the blame for his smelly mishap.

3. Being Ambitious At Work

As evidenced by an episode this season, Abbi and Ilana worship presidential candidate Hillary Clinton. Abbi is constantly trying to move up the ladder at her gym job, because she deserves it. It may not be part of her illustrator dreams, but she also knows her worth is more than cleaning up pubic hair forever. Ilana has long aspired to be a "boss b*tch" and even gets a taste of it when she hires unpaid interns (with hilarious results), volunteers for Clinton, and finds her calling in being a bike messenger.

Abbi and Ilana aren't scared to go after what they want and don't need to adhere to gender norms (see below) or playing games with guys. Ilana hit on men in a park with her parents sitting next to her. Recently, Abbi made the decision on her own to have sex with co-worker Trey while he was staying over at her apartment.

Ilana and Abbi have the perfect response to any stranger who tells them to smile.

Women need to support other women — and no one does it better than Abbi and Ilana. I think it's refreshing that Abbi and Ilana are such close friends who support each other no matter what. No hate. No backstabbing. And, sure, things get a little co-dependent sometimes with Ilana getting jealous if Abbi hangs out with someone else, but when Abbi and Ilana do have a problem or secrets that arise, they work through it like adults.

Broad City is so refreshing in that neither Abbi or Ilana are forced into the role of the typical female in romance — you know, the hopeless romantic, the woman who needs a man to define her, or the woman who falls in love too fast. While Ilana was casually hooking up with Lincoln, he was the one who was looking for a tiny bit more of a commitment. Same with Abbi and Trey, while Abbi was the one subtly telling him she just wanted to have sex with him.

Ilana is all about letting out the occasional "Yas Kween" and making sure her opinions are heard. Abbi struggles with asserting herself sometimes, but she always finds a way to eventually.

Last week, Ilana wore her period-stained jeans to the airport as a distraction through security. And, she's proud of it. Abbi and Ilana even talk about bringing period panties to Shark Tank. Not a bad idea.

When Bevers leaves Abbi's apartment, she parades around the apartment naked (who wouldn't?). Ilana always compliments Abbi's butt. These ladies are never ashamed of their bodies — they're more likely to flaunt it at the club in makeshift clubwear made from overalls.

With all this to reflect on, it makes me even more excited for Season 4 and the expert feminist jokes to come.

More like this
It’s Official: The Bachelorette Is No Longer A Fairy Tale
By Samantha Allen
What’s New On Netflix: 'Never Have I Ever' & 'Indian Matchmaking' Return
By Arya Roshanian
On 'Industry,' Marisa Abela Takes Control
By Morgan Leigh Davies
'A League Of Their Own' Star Abbi Jacobson Is Engaged To Jodi Balfour
By Jake Viswanath
Get Even More From Bustle — Sign Up For The Newsletter