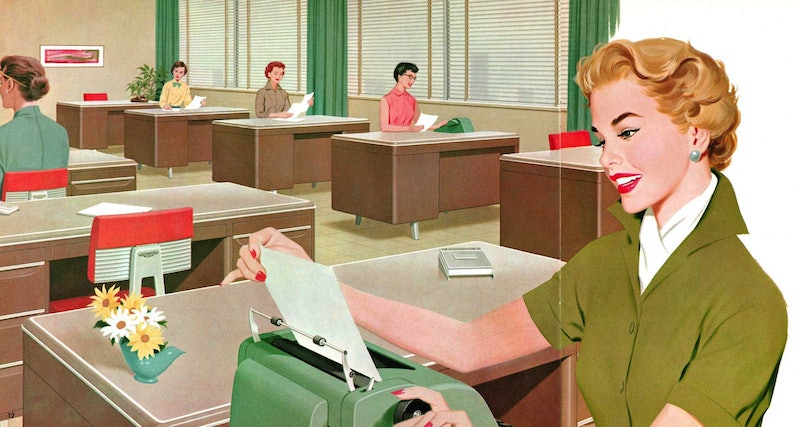 As you, I, and the perennially popular children's book of the same name know, everybody poops, everywhere, at every hour of the day — a scope which, of course, includes pooping at work. People poop at work. Often. How often? Well, consider the fact that most humans poop anywhere from three to 21 times a week; consider also that most Americans spend 47 hours a week at work. You don't have to be a professional mathematician, or even a professional poop analyst to know that that equals a whole lot of work pooping going on. And yet, anecdotal evidence would suggest that there is a very high level of pooping-at-work anxiety afoot — particularly among women.

Stories about women pooping on different floors of their office buildings than the one they work on abound, and articles about women going to extreme measures to disguise their work pooping (like pulling their legs up so they're not visible under the stall, as if they were hiding from security guards) are more common than I'd like. Theorists draw connections between women's reluctance to poop at the office and inequality in the workplace.

On some level, I get it. Communal bathrooms are strange — there is something inherently weird about being able to hear the intimate bodily functions of people you've never even had a casual elevator conversation with — and single occupancy bathrooms, which are often placed somewhere inconveniently attention-grabbing, can make exactly how much time you spent in there (and thus, what you were most likely doing in there) an open secret. All of these factors certainly make pooping in public more of drag than pooping at home, where you're free to kick your shoes off, dig into a new issue of Us Weekly (cover story: "Famous Babies: Better Than Regular Babies?"), and really go to town.

Though there are many guides that aim to allay anxiety by teaching you how to draw minimal attention to yourself while you work-poop, I'd like us to take things one step further: Let's stop being anxious about being "caught" pooping at work. It doesn't make us look unprofessional, and no one is judging us for it. Let's take back the bathroom, sisters!

Here are seven reasons why you should absolutely poop at work.

1. Everyone Else In Your Office Definitely Has

Even if they went through some breaking-into-Fort-Knox-level secret manuvering to keep others from seeing them, every person you work with has still pooped during the work day. Sometime between 9 a.m. and 5 p.m. on a week day, even your most glamorous coworker has pooped. Thus, no one is judging you for having the sheer nerve to poop during business hours. They're just not.

Pooping at work isn't doing something rude, like making a loud personal phone call. It's not even like accidentally burning popcorn in the microwave and making the whole place smell like scorched artificial butter topping. It's a common human experience, like breathing or complaining about February.

2. No One Is Paying Attention To Your Shoes

If you're afraid that people will recognize you by your footwear while you poop, think about it: Who is bored enough in a work bathroom stall to check out the footwear around them? Only other people who are pooping. Pee-ers are in and out, and folks redoing their hair or makeup tend to try to put as much emotional space between themselves and the rest of the bathroom as possible.

You're not wasting company time by heeding nature's call, or unfairly ducking out on your duties (hehehe, "duties"). In fact, your right to poop at work is defended by the U.S. Department of Labor, who fine employers who don't allow adequate bathroom breaks. Pooping at work is one of your rights as a working American, your boss is legally required to deal with it, and you should exercise this freedom whenever you feel the urge.

4. Nobody Cares But You

No one cares that you're pooping. They just don't. Even if you have the dreaded "single occupancy placed in the middle of workspace, as if on a stage" bathroom, and you come out after ten clearly poop-filled minutes, no one is thinking, "I can't believe that woman had the audacity to poop at work."

If they think anything about it, it is probably more along the lines of "I'm glad she finished in there, because I have to poop SO badly."

5. Holding It Makes You Sick

You can't stop taking care of yourself just because you're on the clock — and this goes for everything, from occasionally eating something healthier than a taquito, to letting yourself poop when you need to poop. Holding it in is bad for your health — it can lead to everything from hemorrhoids to pelvic floor dyssynergia, a complete loss of rectal muscle coordination, aka no longer being able to poop when you want or need to.

You know who the main people who suffer from pelvic floor dyssynergia are? Long-haul truckers, and young women who are too embarrassed to use public restrooms. For real. Don't let embarrassment over something totally healthy endanger your health.

6. It Won't Alienate Your Coworkers

Isn't that what this is all really about? The fear that someone will be doing their hair or fixing their makeup while you come in to poop, and then when you're done, they'll be waiting to ambush you and burn you as a poop witch or something? I knew you wouldn't just take my word on this one, so I did some on-the-ground research: I just got up and pooped while writing this article, at work, in my office (I'm no hero — I'm just someone who had a cup of coffee an hour ago).

Two of my coworkers happened to be in there, fixing their hair. I sat down in the stall, and I admit, I had second thoughts — maybe I could come back when the bathroom was, you know, less busy. But I pushed through (ahem), and exited to see my two coworkers, who were still there, and who did not point, laugh, or club me over the head with a roll of paper towels.

There's no point is losing more of your life worrying about this stuff.

7. Pooping At Work Is A Feminist Act

While there are certainly tons of men who have issues with work pooping, for many women, it's a culturally prescribed behavior to be anxious about pooping at work — part of a belief that natural bodily functions are somehow "unnatural" and "gross" when they happen to women.

There's even some theoretical hokum out there about how our cultural hang-ups about women and pooping are somehow "primal" in nature. That's the real steaming load here. Don't buy into this stuff — you don't need to add policing your own femininity to your already heavy workload. You work hard, and you deserve both the comfort of recently evacuated bowels, and of knowing that you can succeed at work without holding yourself to impossible standards about what a woman is "supposed" to be.

Because you're never going to be able to really lean in if you're holding in a deuce at the same time.

More like this
The Spiritual Meaning Of Angel Number 000, Explained
By Kristine Fellizar
10 Pumpkin Recipes That Are Way More Creative Than Pie & Lattes
By Rebecca Deczynski and Alexis Morillo
Isa Guha Is Taking The Lead
By Charlie Mock
This Psychological Effect Might Be Keeping You From Hitting Your Goals
By Lexi Inks
Get Even More From Bustle — Sign Up For The Newsletter