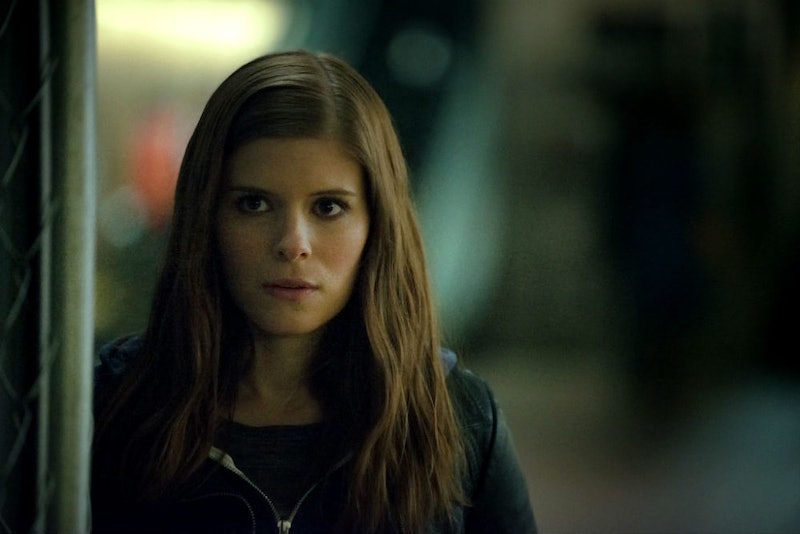 Proceed with caution, House of Cards fans, for major spoilers lie ahead. The Season 2 premiere of House of Cards hit Netflix this morning, and as Kate Mara told reporters before Chapter 14 debuted, it truly started with a shattering, blood-draining bang: Zoe Barnes is dead.

Zoe (Kate Mara) was our great white hope against the red tide that is Frank Underwood. And those hopes were dashed more quickly than a coin toss. The legacy of Woodward and Bernstein taught us to believe in small miracles — that the little, plucky reporter could take down the big guy. There was just one problem: the plucky reporter started out by getting in bed with the big guy. And that was her downfall, literally.

In her second meeting with Frank during Chapter 14, Zoe gets bold and in her boldness, a bit reckless. She's far too trusting of Frank and sees nothing amiss when he asks to meet her in the Metro station. The wind in the tunnels is blowing, so we know it's only minutes before the next train arrives, yet she stands with the enemy at the edge of the tracks and asks him point blank if he involved her in Peter Russo's murder plot. It was a brave move, but it's also what got her killed.

Frank invited her to hover over a pit of fire while he held the lever, just waiting for her to give him a reason to drop her. And drop her he did. As soon as she turned the corner of the construction fence to ask him for more information, he emerged from the shadows and pushed her right in front of a moving train. In less than half a second, Zoe Barnes — our could-be Bernstein — was gone.

What's interesting about Zoe's death is that the series gave us full warning, yet it was still the most shocking thing that could have happened. Lucas warned Zoe not to be reckless. She said she had it under control. Frank said multiple times that he'd "take care" of Zoe, which is always TV thriller code for murder. Yet it seemed certain Frank would threaten her with death and give her a chance to back off before offing her.

We didn't want to believe the series would rip away a character so central so soon. But Netflix's epic political thriller is no chicken. Series like The Walking Dead tell us "no one is safe," but every series that claims to have no mercy often fails to deliver. House of Cards, like its central character, has no qualms about truly getting its hands dirty. Really, really dirty. The series really is ruthless and when Frank says he'll do anything to gain power, we'd best believe it. After Chapter 14, we certainly will.

So what's next now? Without Zoe to shoulder our hopes and Janine (Constance Zimmer) fleeing D.C., Lucas is the only one still on Underwood's trail. While Lucas is a tenacious reporter, he isn't nearly as engrossing as Zoe, but he does have one advantage: he's out for revenge. But can we go on without Zoe?

Sure, she played with fire when she agreed to enter into a sexual and political deal with Frank. She didn't earn her stories or her success honestly, but she played the game dirty, just like Frank. She just wasn't nearly as good at it as he was and she suffered for it. While it's impossible to think of this show without Ms. Barnes, her death is incredible meaningful in the grand scheme of things: it means House of Cards isn't pulling any punches and that in Frank Underwood's road to power, there is literally nothing he won't do.

More like this
20 Photos From The 'Stranger Things' Season 4 Premiere To Make You Feel Old
By Alyssa Lapid
Everything To Know About 'The Circle' Season 5
By Gretchen Smail
What Does Michael Peterson’s Family Think Of 'The Staircase'?
By Arya Roshanian
Why That Kate Bush Song Is Perfectly Suited For Max In 'Stranger Things'
By Gretchen Smail
Get Even More From Bustle — Sign Up For The Newsletter