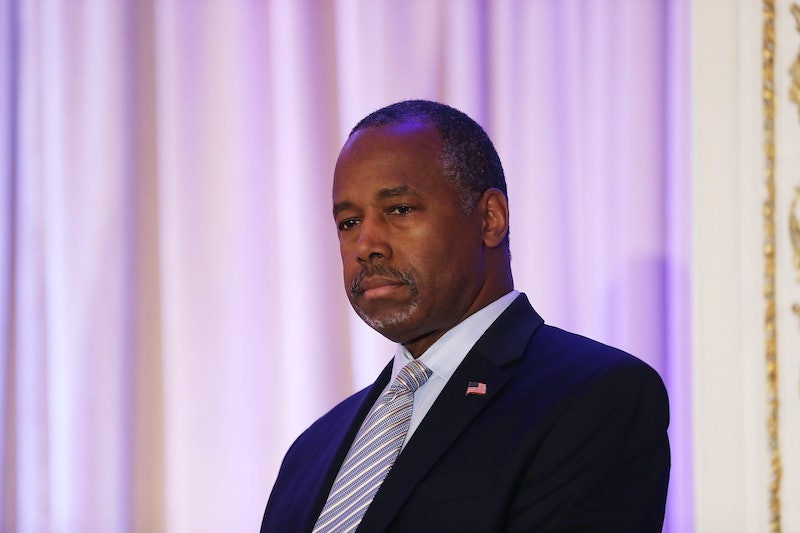 I don’t know about you, but I actually forget from time to time that Ben Carson, former neurosurgeon and fruit salad aficionado , ever actually dropped out of the GOP race. There were so many times on the debate stage when you knew he was there, off-camera, not speaking while the rest of the debate went on without him, that there's not really a huge difference between back then and the current Republican race. It seems I am not alone in forgetting Carson isn't running.

The good people of New York’s 16th congressional district voted for the retired candidate/surgeon in greater numbers than they did for Ted Cruz. Trump, of course, was the runaway victor in the district with 50 percent of the vote, followed by Kasich at 28 percent, and then we get to Ben Carson at 12 percent, followed by sad Cruz at 10. I wish Martin O’Malley could have gotten a vote or two in solidarity, but we can’t have everything.

Interestingly, the 16th wasn’t even the only district where Carson did well. He almost upset Cruz again in the 17th, coming in with nine percent to Cruz’s 10 (Trump, again, won there with 50 percent). He also poked his head up, Lazarus-like, to get four percent in the 18th district.

Inadvertently embarrassing Cruz like this is really the best present Carson has gotten for Trump in some time, after weeks of famously trying and failing to say nice things about him, even though he outright endorsed The Donald. Carson has gone on national television on numerous occasions to give Trump such compliments as “Even if Trump’s a bad president, it’ll only be four years … are there better people? Probably.”

Carson’s greatest hits on a potential President Donald also include: saying Trump only advocated punishing women for abortions because he wasn’t told in advance about the question, shrugging off the celebrity billionaire’s racism (“What’s the alternative?” Carson mused, as our brains collectively exploded), and saying (in his official endorsement of the man), “There are two different Donald Trumps. There’s the one you see on the stage and there’s the one who’s very cerebral, sits there and considers things very carefully." Since Carson dropped out and began vocalizing his support for Trump, he has not been the most helpful surrogate, to say the least. Now, though, for the first time, Carson being out of the race has done Trump some good, if only by unintentionally humiliating his biggest rival.

For the record, Cruz got exactly zero delegates in Tuesday’s primary, so it’s really anyone’s guess what the most painful part of the night was for him — losing to Trump (probably not, as this was expected), losing to Carson (less expected?), or just losing so totally in general.