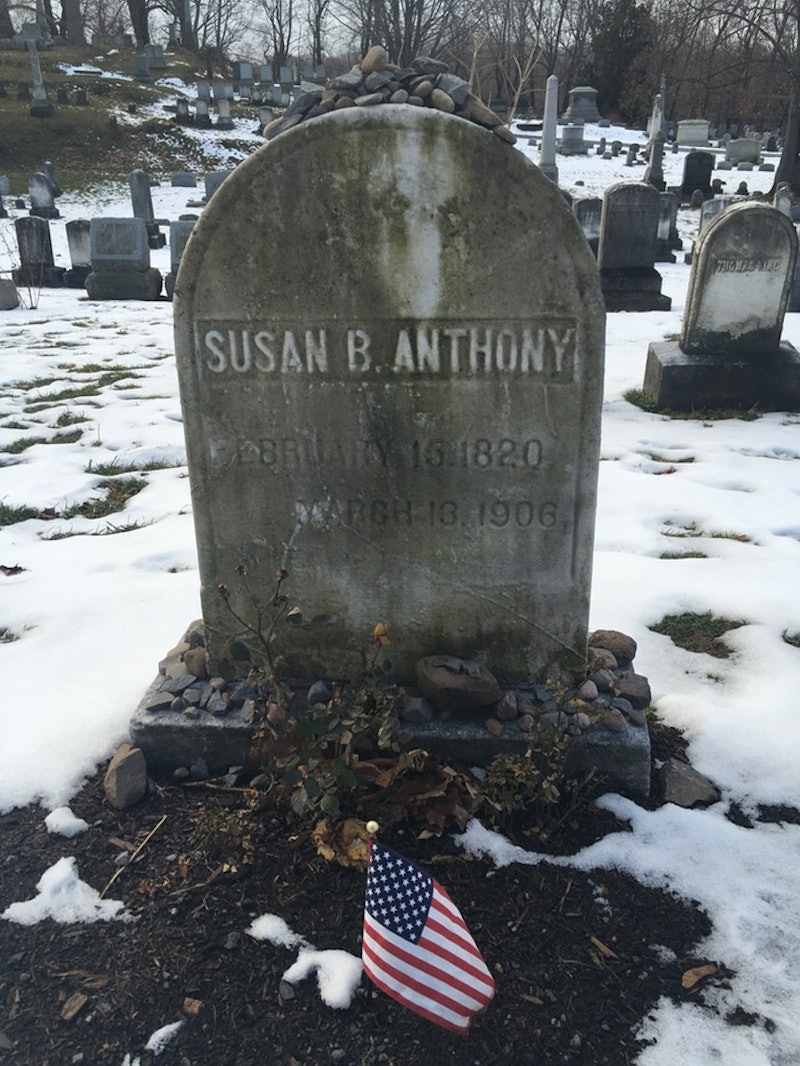 If you're a New Yorker, then you know all too well what the hubbub of the New York primary was like yesterday. But while we were all thrust into the hustle of lines at the polls and dodging aggressive campaigners on the sidewalk, in a quiet little spot in Mount Hope Cemetery in Rochester, New York, voters were decorating Susan B. Anthony's grave to celebrate. Twitter user Adam Blickstein shared the iconic image, where visitors appreciatively stuck their "I Voted" stickers on her headstone, a tradition in Rochester. This year's picture has since been shared thousands of times, a fitting testament to the suffragist who worked so tirelessly to ensure women the right to vote during a presidential election where a woman is among the frontrunners.

In the world Susan B. Anthony was born into, the very idea of a woman voting, owning her own property, or even having a legal right to her own children was unthinkable. One of many famous suffragists of her time, but arguably the most historically recognized, Anthony devoted her life to publicly speaking for women's rights and co-writing the now famous Declaration of Sentiments and The History of Woman Suffrage. She was famously arrested in the parlor of her Rochester home for voting as a woman in the state of New York in 1872 — and now, 144 years later, women aren't just able to vote, but to vote for a woman running for president as well. It's safe to say her hustle paid off.

Anthony didn't live to see the ratification of the 19th amendment giving women the right to vote in 1920, but it was her work that paved the way for women suffragists and sympathizers who continued to carry the torch for the cause. To this day the Susan B. Anthony house is preserved in Rochester, just miles away from her gravesite and a short walk from the statue erected in honor of her and Frederick Douglass, another champion of women's rights at the time. It is in the attic of that house that she also co-authored the four massive volumes of The History of Woman Suffrage with fellow suffragists Elizabeth Cady Stanton and Matilda Josyln Gage.

Yesterday Hillary Clinton won the New York democratic primary, with about 58 percent of the vote compared to Bernie Sanders' 42 percent. The homage to Susan B. Anthony could not be more fitting on this particular day, considering all that Anthony fought for, and the belief she held fast to her entire life: "There never will be complete equality until women themselves help to make laws and elect lawmakers." Regardless of how the election shakes out, no doubt she would be very proud to see this moment, and honored that voters made her a part of it.

More like this
10 Organizations To Support On Latinx Women's Equal Pay Day
By Caroline Burke and Mia Mercado
What Does “The Rizz” Mean On TikTok? The Viral Slang Term, Explained
By Alexis Morillo
The 10 Memes That Defined 2022
By Alexis Morillo
This AI Filter Shows How You’d Look In Different Time Periods
By Alexis Morillo
Get Even More From Bustle — Sign Up For The Newsletter