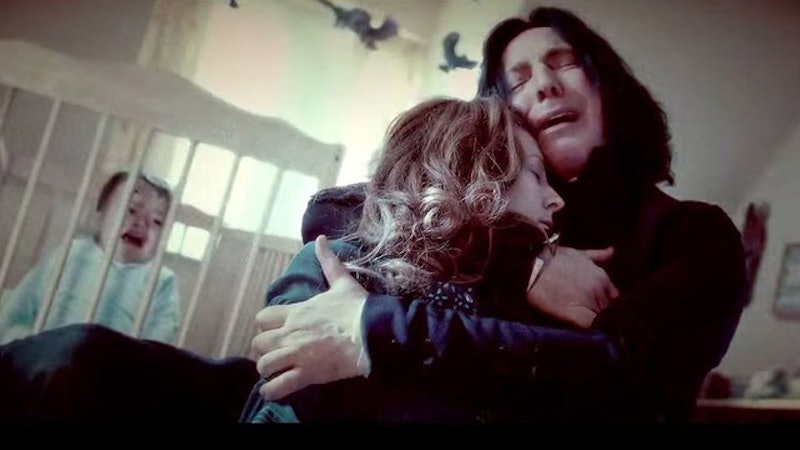 I'm going to put this on the table right now: unlike many people, I trusted Severus Snape from the beginning. After you read these Severus Snape quotes, you'll trust him, too.

Even though I am a 25-year-old adult woman and the last of the Harry Potter books was published a little less than 10 years ago, it is still important for me to specify that I did not jump on the Snape bandwagon after his innocence was proven in Harry Potter and the Deathly Hallows . Even at his worst (and yes, even when that worst included killing the beloved Albus Dumbledore), I still believed that Snape was a hero. For whatever reason, like Dumbledore, I would have trusted that hook-nosed, greasy-haired jerk with my life. So I felt vindicated when it turned out that one of my favorite characters wasn’t the evil murderer everyone was making him out to be, but actually a hero!

I’ll be the first to admit that it’s really, really easy to hate Snape. He’s a jerk for more or less the entirety of the series, and even when he is doing something noble (like trying to save Harry’s life or respecting Dumbledore’s dying wishes), he still comes across as a pretty nasty guy. But that’s why he’s the best! Because even terrible nasty jerk-faces can be heroes! Below are some of my favorite Snape lines, which definitely capture his “mean-spirited hero” classification perfectly.

“You are here to learn the subtle science and exact art of potion-making. As there is little foolish wand-waving here, many of you will hardly believe this is magic. I don't expect you will really understand the beauty of the softly simmering cauldron with its shimmering fumes, the delicate power of liquids that creep through human veins, bewitching the mind, ensnaring the senses. . . I can teach you how to bottle fame, brew glory, even stopper death — if you aren't as big a bunch of dunderheads as I usually have to teach.”

"Then you will find yourself easy prey for the Dark Lord! Fools who wear their hearts proudly on their sleeves, who cannot control their emotions, who wallow in sad memories and allow themselves to be provoked this easily -- weak people, in other words -- they stand no chance against his powers! He will penetrate your mind with absurd ease, Potter!"

"That is just as well, Potter," said Snape coldly, "because you are neither special nor important, and it is not up to you to find out what the Dark Lord is saying to his Death Eaters." "No -- that's your job, isn't it?" Harry shot at him. He had not meant to say it; it had burst out of him in temper. For a long moment they stared at each other, Harry convinced he had gone too far. But there was a curious, almost satisfied expression on Snape's face when he answered. "Yes, Potter," he said, his eyes glinting. "That is my job."

“Yes, it is easy to see that nearly six years of magical education have not been wasted on you, Potter. Ghosts are transparent.”

“The Dark Arts are many, varied, ever-changing, and eternal. Fighting them is like fighting a many-headed monster, which, each time a neck is severed, sprouts a head even fiercer and cleverer than before. You are fighting that which is unfixed, mutating, indestructible."

"You dare use my own spells against me, Potter? It was I who invented them - I, the Half-Blood Prince! And you'd turn my inventions on me, like your filthy father, would you? I don't think so . . . no."

"Kill me then," panted Harry, who felt no fear at all, but only rage and contempt. "Kill me like you killed him, you coward -" "DON'T -" screamed Snape, and his face was suddenly demented, inhuman, as though he was in as much pain as the yelping, howling dog stuck in the burning house behind them - "CALL ME COWARD!"

“Would you like me to do it now?" asked Snape, his voice heavy with irony. "Or would you like a few moments to compose an epitaph?”

“Dumbledore watched her fly away, and as her silvery glow faded he turned back to Snape, and his eyes were full of tears."After all this time?""Always," said Snape.”