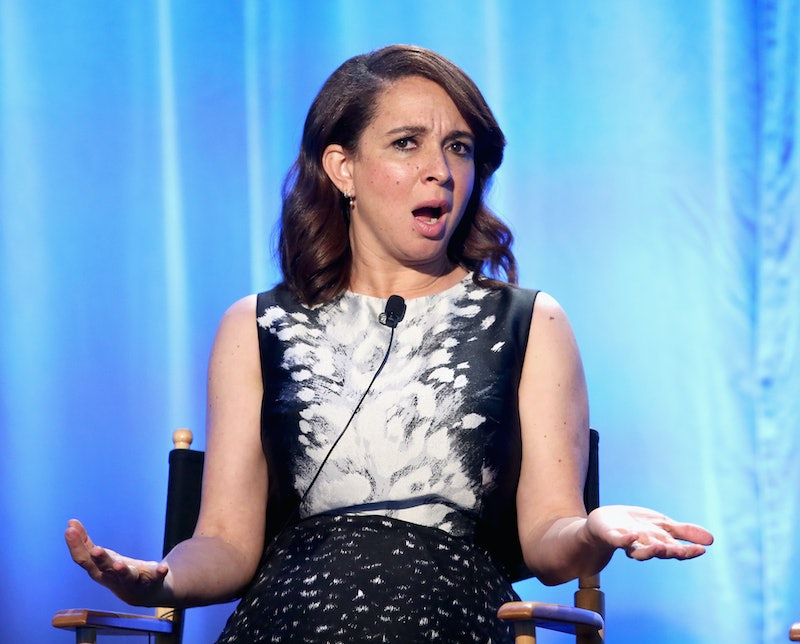 This Saturday Night Live veteran doesn't get irritated very easily. In fact, Maya Rudolph is one of the most relaxed stars I've ever interviewed. As we sit outside on a patio overlooking the ocean in Hawaii, the direct sunlight accosts our faces, but she doesn't seem to mind. "If it's too sunny, we can move," she assures me.

Rudolph, in an ankle-length maxi dress, her wild hair pinned out of her face, and very little — if any — makeup, is on island time. She reclines in her wooden chair and breathes in the salty air. "It's so nice to get to relax for two seconds when you're working," she says. "What could be better than this?" And honestly, I can't think of a single thing.

The 43-year-old actor is here to promote her latest film, Angry Birds, where she voices Matilda, one of the many birds who deal with anger management issues in the film based on the popular smartphone game of the same name. And as I register how completely relaxed Rudolph is in this moment, I almost feel bad for the question I'm about to ask her.

"When was the last time you were really, really angry?" I say, and her expression shifts.

"It's taken me 43 years, but I'm finally getting better at it," she says of dealing with anger. "I try to take a second before I react, but I went full tilt mama bear on this lady once," she says. Uh oh, this oughta be good.

"I took my daughter to Macy's to take a picture with Santa. She was a toddler and the line was super long, but it was one of those New York experiences I really wanted her to have. I was holding her, and she was fidgety, and her legs were kind of kicking. It took me a few minutes to realize the woman behind us was a little bit cuckoo. She was there by herself, and she didn't have a kid with her, and everyone else there was like a cute couple or had kids, and she just wanted her picture with Santa," Rudolph recalls.

"She freaked out on my daughter, and I went crazy. She got upset: 'Your daughter is kicking me!' She was yelling at us. I don't even remember the words I used, but it was this full rage. You're out of body because you're protecting your young. I felt like a bear. I felt like, 'You don't talk to my child! Stay away from my baby! I don't even remember what I said, but it was the first time it was a full on animal reaction to protecting my young."

It's hard to imagine Rudolph, freckled and reclining in the Hawaiian sun, going "full tilt mama bear" on anyone, but alas, we all have our trigger points.