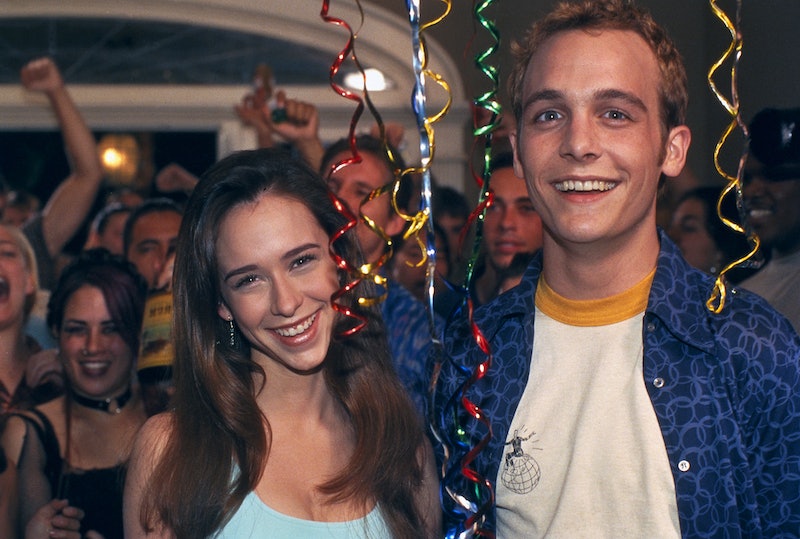 I graduated in 2000, so the 1998 teen comedy classic Can't Hardly Wait was a major part of my fantasy high school experience. I'm still bitter that I wasn't invited to a party like the end-of-senior year blow-out at Molly Stinson's house. In high school, every experience seems monumental; so it didn't feel unlikely at all to me that one graduation party on one crazy night could change the lives of a group of teens forever. Can't Hardly Wait is a fantasy, and so — at the time — was romantic hero Preston Meyers, played by Ethan Embry. When I was 16, Preston was the rare high school boy with the soul of an artist — he represented everything contrary to the jocks-and-cheerleaders social structure that felt so stifling. His pursuit of disillusioned Queen Bee Amanda Beckett (Jennifer Love Hewitt) is the heart of the movie; the credits couldn't have rolled before they got their kiss and their happy epilogue.

But, as I get older, I'm seeing Preston Meyers for who he truly is. And I'm very sorry, but I might be about to burst a childhood crush bubble. In Can't Hardly Wait, Preston is actually the worst kind of self-proclaimed "nice guy." He's cute and shy and likes to read (aw), but he also has a troubling outlook on relationships and women in general. Here are eight more reasons why Preston from Can't Hardly Wait is undercover terrible.

1. He Never Tries To Get To Know Amanda

What exactly does Preston know about Amanda Beckett, the woman of his dreams? (Well, she's a Jewel fan. But their whole class knows that.) The answer to that question is nothing. Nothing of substance, and nothing that he couldn't tell just from watching (I mean stalking) her from afar. Yet Preston is sure that Amanda is the one for him, despite the fact that he hasn't gone to the trouble of asking her any questions about herself. She's a prize to him — not a person — and no matter how different he likes to think he is from Mike Dexter, this makes them kind of the same douchey guy.

2. The Universe Gets More Of A Say In Their Relationship Than He Does

Does Amanda want to be with Preston? Doesn't matter, because Sweet Lady Destiny does. Or at least that's what he's convinced himself of over the years. Amanda's journey in this movie is supposed to be about relocating her agency after giving up her identity for the whole of high school. But she ends up with another dude who's convinced that fate (and by extension, he) knows what's best for her.

3. He Takes His Best Friend For Granted

Everyone knows that Denise Fleming is the true hero of Can't Hardly Wait. Preston is lucky enough to have this wise-beyond-her-years lady as his best and most loyal friend, and what does he do? He talks at her about another girl. A girl who is in many ways, the complete opposite Denise. Not that Denise had any feelings for Preston (why would she?), but that's still grossly insensitive.

4. In Fact, He Makes Her Go To A Party She Wants No Part Of

Why do I get the feeling that Denise never gets to pick the activity? Preston forces introverted Denise to go to graduation night rager for moral support and then ditches her the instant they arrive. Granted, this abandonment leads to her reconnecting with grade school best friend Kenny (who is a whole different post of troublesome characteristics), but still.

5. He Sees Amanda's Popularity As A Slight Against Him

Preston believes that if Amanda hadn't become popular, he would have had a chance with her. That means that he assumes that she would allow social standing to prevent her from befriending someone, and that's not a great quality in a mate. Her popularity is an obstacle and an affront to him. It's a problem for Preston that people adore Amanda, which points to a lot of troubling hang-ups. What if they got married and she made more money than him?! Masculinity so fragile.

6. He Even Tries To Call Dibs On Her

It was October, freshman year. First time in history that I'd ever missed the bus. If I had arrived on time, I never would have seen her. But as it was, I was the first person at Huntington Hills High...to set eyes on Amanda Beckett.

OK, gross. "Dibs" is a horrible concept that commodifies women, and Preston has been operating by it for four years. He saw Amanda first, therefore she should be his. When Mike Dexter offers to give her a school tour, that's that. And though Preston is supposedly so enchanted by her, he steps back completely once she's with Mike. Because what's the point of hanging out with a girl you find attractive if you're not going to get in her pants, right?

7. He Shames A Sex Worker

Jenna Elfman makes a cameo as an exotic dancer who Preston continues to refer to as "a stripper" even after she corrects him. Like every other woman in the movie, she exists to serve Preston's purpose. He leaves their encounter caring nothing about her terrible night, but with his own faith in destiny restored. Great.

8. And He Gets Everything He Wanted Anyway

Sorry, '90s kids. Preston Meyers is an awful friend and would probably have made an awful boyfriend too.

More like this
The 'Hocus Pocus' Sequel Finally Has A Release Date & It Makes Total Sense
By Shannon Barbour and Radhika Menon
David Schwimmer Doesn't Remember This Classic 'Friends' Episode
By Sam Ramsden
Hayden Panettiere Will Return For 'Scream 6': "We F*cking Won, Scream Fam"
By Jack Irvin and Jake Viswanath
8 Creepy Things You Probably Did In The '90s
By Julie Sprankles
Get Even More From Bustle — Sign Up For The Newsletter