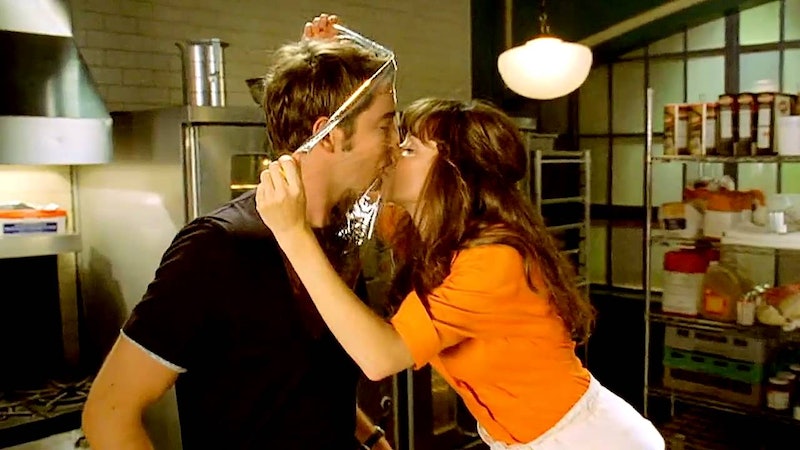 If you ever have one of those days where you need to turn to television to cheer you up, Pushing Daisies should be your first choice. Few shows understood sadness and melancholy as deeply as Pushing Daisies did, but Pushing Daisies was also a happy show full of moments that never fail to make me smile. From the characters straight through to the stunning visuals, warmth and joy were infused in every frame.

The romance between Ned and Chuck, Olive's musical numbers, and Emerson's wit — all of them are instant happiness makers. If you find yourself feeling down and you don't have time to watch an entire episode of the show, then a clip is just the jolt of joy that you need in your life. One slice of Pushing Daisies can be just as effective as a slice of Ned's pie dosed with mood enhancers. I'm sure the Aunts would back me up here.

The next time you feel blue, head to YouTube (or just bookmark this post) and let Pushing Daisies cheer you up. For a show that featured so much death it was also teaming with life, joy, and the kind of creative kisses that will put a goofy grin on your face every time you see them. Get comfy and check out these 13 Pushing Daisies scenes guaranteed turn that frown upside down.

1. "A Little Birdhouse In Your Soul"

Olive and Aunt Vivian singing a duet to "A Little Birdhouse in Your Soul" while in pursuit of a bird with a bedazzled wing is the perfect cure for a bad day.

Ned and Chuck could have been super angsty. They couldn't touch, but they were in love — that's the perfect logline for a tragedy, but those two made it work. Their use of plastic wrap to get around the no touching rule is ingenious and grin worthy.

Emerson has some great lines, but this scene belongs to Chuck. When Emerson gets stuck in a window, Winnie the Pooh style, Chuck is quick to make the comparison. It is impossible to watch this clip without giggling.

Olive reenacting The Sound of Music and being shushed by nuns is about as close to perfect as TV can possibly get.

If you ever need to remember the world is beautiful, just remind yourself that Ned loves Star Wars. He wanted to be a Jedi!

Olive singing "Hopelessly Devoted To You" is a tearjerker — at least until she starts dancing with Digby. At that point things get adorable very quickly.

When Olive gets super intense over the cook off, hilarity ensues. Watching Olive get downright scary during the competition is hilarious and perfect for a quick dose of joy.

One of my favorite scenes is the one where Ned wakes up a nun and she turns out out to be crazy belligerent. Emerson's reaction to her just adds to the wonderful silliness of it all.

9. Olive Makes The Oldest Joke In The Book

Leave it to Pushing Daisies to so cleverly reinvent the old, "is there something in your pocket" joke. When Ned whips out a rolling pin your day will suddenly seem a thousand times better.

Watching Emerson and Ned go undercover at a poker game is silly in the best way possible. Let's just say those two need some help with their covert skills.

Ned's dream about kissing Chuck will make your heart beat just a little bit faster. It's romantic and surreal — just like the show.

12. Aunt Vivian Sings In The Rain

This scene is a smile and happy cry combo. Aunt Vivian leaving the house to sing about new beginnings in the rain is inspiring and a beautiful reminder that there's always another day ahead.

There's nothing like a happy ending to put a smile on your face.

Remember, if you ever need a show to cheer you up, Pushing Daisies will always be there.