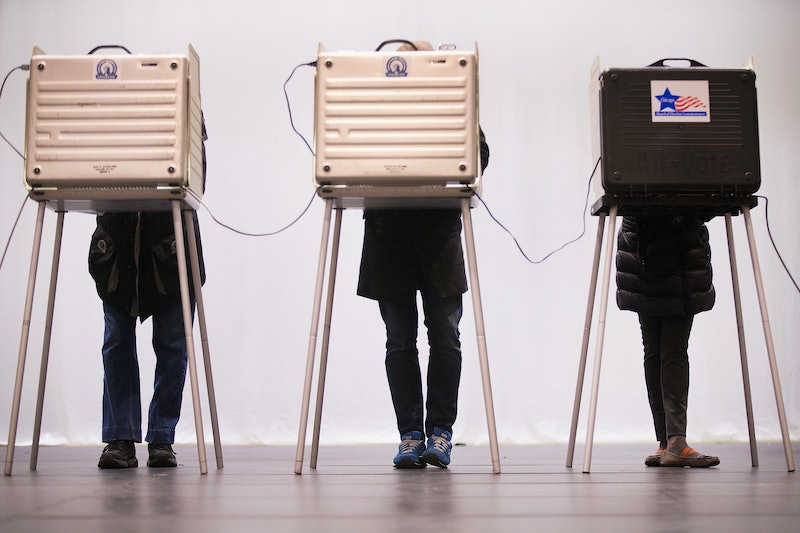 Pennsylvania is one of five states that will hold primaries on April 26, and with a bunch of delegates up for grabs, it's important to understand how each allocates said delegates. It's an issue which is typically more complicated on the Republican side than it is for the Democrats, which proportionally award delegates in every single state. For Republicans, though, this state has some particularly wonky delegate allocation rules. Is the Pennsylvania primary winner-take-all?

A little bit, yes, but for the most part, no. The state has a total of 71 Republican delegates. There are three Republican National Committee (RNC) member delegates, 14 "at-large" delegates, and 54 congressional district delegates. The at-large and RNC delegates, 17 total, are awarded by the winner-take-all method. In Pennsylvania, a candidate only needs to win a plurality of votes to get all 17 of these delegates ― so not necessarily more than 50 percent, as in some states.

Things start getting weird when we look at the 54 congressional district delegates. Delegate candidates from congressional districts will be listed on Tuesday's primary ballot, and voters will select them directly. The delegates won't have to let voters know which candidate they will support at the party's National Convention in July. According to RNC rules, these 54 are "elected on the primary ballot as officially unbound."

We won't know for sure how many of these 54 unbound delegates will go to each candidate until the convention. But we're not completely in the dark. Pennsylvania newspaper The Morning Call reached out to the state's 162 delegate candidates to ask how each plans to vote at the convention, and published the results. Forty-seven said they planned to vote for whichever candidate wins in their congressional districts, 30 expressed support for Donald Trump, 21 backed Sen. Ted Cruz, 21 were uncommitted, and several others said they'd base the decision on who won the statewide vote. We don't know which of these delegates will actually be elected to attend the convention, but this data provides a snapshot of the candidate pool's composition.

The Republican candidates are working to convince Pennsylvania's unbound delegates to support them at the convention. The 54 free agents could prove crucial in July if Trump fails to earn the 1,237 delegates needed to secure the nomination. Cruz and Kasich are angling for a brokered convention, so they will try to garner support from as many of the unbound delegates as possible.

The average of recent polls compiled by Real Clear Politics shows Trump with a solid lead in the state, so he can expect to walk away with its 17 winner-take-all delegates. But he might need a good deal of the 54 unbounds to become the Republican nominee.