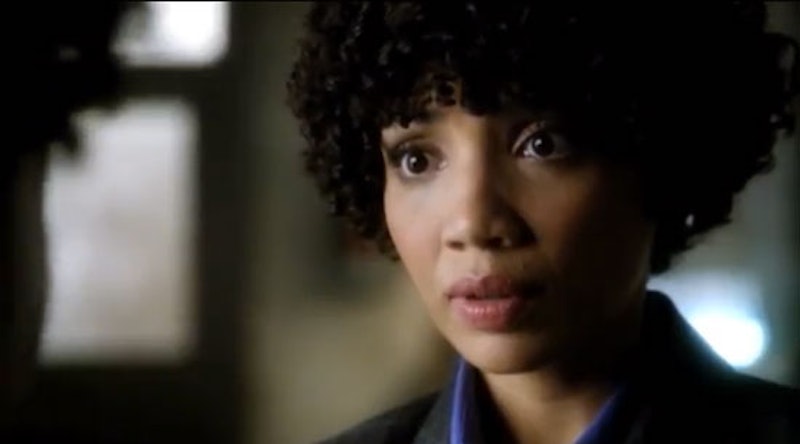 Fringe was an incredible, dense sci-fi show. I'm talking multiple universe, rich stories of the week, and strong, fleshed-out characters. Though many Fringe fans may disagree with me, my favorite character was Astrid Farnsworth. Astrid was by far Fringe 's most underappreciated character. The woman was a brilliant scientist, even if, for seasons on end, she was doing nothing but fetching things for Walter. It was distressing, because Astrid Farnsworth was amazing.

Astrid was smart, funny, strong, confident, and loving. Her bond with Walter was one of Fringe's greatest assets, and she never failed to be compelling. The sole Astrid-centric episode of the series, "Making Angels," was one of the best Fringe ever produced. However, to this day, Astrid is still the character most likely to be left out of the conversation about the show. She may not have been as flashy as Peter or as essential to the plot as Olivia, but Fringe would not have been Fringe without Astrid, guys.

If you need a reminder of just how awesome Astrid was, here are 11 reasons she was Fringe's most underappreciated character. It is time for her to finally get the recognition she always deserved.

1. She Held The Fringe Family Together

Just because Astrid spent the majority of her time in the lab doesn't mean she wasn't the glue that held Fringe's band of misfits together. Astrid was Walter's key confidante, and an emotional ally for Olivia and Peter. More than that, in Season 4, she was the one who accepted Peter and welcomed him back into their world, proving she was the group's emotional center.

2. She Was All Kinds Of Brilliant

Astrid spoke five languages and was an actual genius. She was amazing with computers, adapted to a science environment quickly, and was instrumental in solving cases. Her skill set was seriously impressive.

3. Walter Would Have Been Lost Without Her

Walter had an amazing mind, but it was broken in ways that could never be fixed. By being at his side, listening to him, and caring for him, Astrid kept Walter tethered to reality. Their relationship was quite possibly the show's very best.

4. She Kicked Butt In The Field

One of the show's best-kept secrets was the fact that Astrid was a total badass. She physically kept Walter safe at one point, and proved to be an asset throughout Season 4.

It was easy for Fringe to get lost in its own sci-fi inventiveness and forget about the human element. Astrid was the character who made every story, no matter how outlandish, feel real. She was an emotional person who infused so much heart and life into every case that she made you believe in the fantastic.

6. She Kept The Show Grounded With Laughs

Second only to Walter in the humor department, Astrid was always quick with a sarcastic comment or a wry observation. She was at her best when she was shooting Walter looks of pure exasperation, though. Astrid could make me laugh with nothing but a well-timed eye roll.

7. She Had The Most Fascinating Alternate Universe Counterpart

Astrid's alternate version was autistic. She retained all of the prime world Astrid's brilliance, but she couldn't form the emotional connections that came so easily to the other Astrid. The alt-Astrid's time on the show was a fascinating examination of Astrid as a character which highlighted how much she had to offer across multiple universes.

8. The Astrid-Centric Episode Was One Of Fringe's Best Outings

Two versions of Astrid having an honest discussion with each other was more fascinating than a dozen monsters of the week.

9. She Made The Lab Just As Interesting As The Field

Sure, there were weird experiments gone awry and sci-fi monsters out in the field, but Astrid made the lab feel like a home. Without her, it would have just been a place for all the exposition to happen in.

10. She Was The Audience's Proxy

Astrid was the character you could always relate to. There was nothing fantastical about her. She just happened to be a smart, capable person who was part of a team with more drama than your average daytime soap opera.

11. Her Capacity For Love Was Unending

Astrid showed Walter so much compassion and love. It was like she never tired of giving herself to others. Her heart was so open to the team, and no one ever fully appreciated how much of herself she put into her work, as well as her relationship with her co-workers.

The one Fringe mystery that will never be solved is why fans didn't realize just how essential Astrid was to the world it created. Team Astrid will always be the best Fringe team to be on.