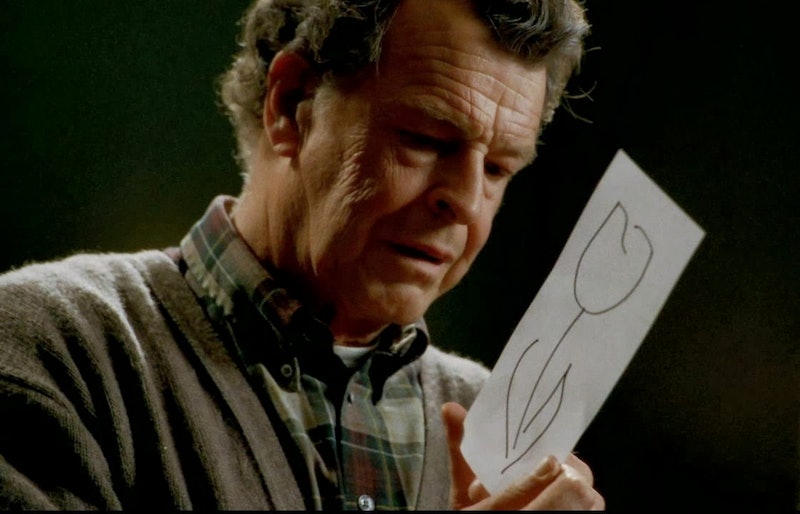 While every TV episode has a title, it's rare that they ever actually appear onscreen; usually, the only time viewers will encounter them is while they're bingeing a show on Netflix. But every now and then, an episode comes along that is so good, so memorable, so transcendent, that it earns the rare honor of having its title cemented in the public consciousness. "Pine Barrens." "Once More With Feeling." "The Constant." "The Suitcase." "The Rains Of Castamere." "Ozymandias." These episodes of The Sopranos, Buffy The Vampire Slayer, Lost, Mad Men, Game Of Thrones, and Breaking Bad need no introduction other than their iconic names. For fans of Fox's Fringe , "White Tulip" is that episode — and it more than deserves a place on that list of the greatest hours in television history.

What makes "White Tulip" so special? First, a brief crash course for those unfamiliar with Fringe — or for those whose memories have faded with the inexorable march of time. Dr. Walter Bishop (John Noble) is a mad scientist who was released from an insane asylum by FBI agent Olivia Dunham (Anna Torv) to help her solve a rash of deaths/attacks involving pseudo-science, referred to as The Pattern. They're aided in their efforts by Walter's estranged son, Peter (Joshua Jackson), who it turns out was kidnapped by Walter from an alternate universe when he was much younger, after Walter's real son died of a mysterious disease. Although this fact has been recently revealed to the audience in a flashback episode, Peter himself is still unaware of his own origins. As "White Tulip" begins, Walter is grappling with whether to tell his son the truth — and risk losing him in the process.

After the episode's creepy prologue that introduces the case of the week (more on that in a moment), the first character we see is Walter. He's sitting at his desk at home, writing a letter to Peter, after promising Olivia at the end of the previous episode that he would tell his son everything. Just as he's finishing, the phone rings — it's Peter, telling him they're needed by the FBI. With no more time to give the letter any thought, Walter tucks it into his sweater on the way out the door.

(This will all be important later, in case that wasn't abundantly clear.)

Meet Dr. Alistair Peck. Played by RoboCop's Peter Weller, he's one in a string of memorable characters played by guest stars with serious geek cred, including Back To The Future's Christopher Lloyd and Star Trek's Leonard Nimoy. As it turns out, Alistair isn't an angel at all. He's simply a man — albeit a man who has harnessed the power of time travel with the help of a homemade Faraday Cage built into his very skin, transforming him into a grotesque half-human, half-machine hybrid. And why has he gone to such great lengths?

Because his beautiful fiancée is dead. Alistair's not a power-hungry megalomaniac or a two-dimensional comic book villain; he's simply trying to travel back 10 months to avert the tragic death of the love of his life. And if the energy needed to leap through time saps the life from the bystanders around him... then so be it. When the Fringe team finally catches up with him, he simply activates his device and travels back to the train — effectively erasing the past 15 minutes of the episode and starting it all over again.

What comes next is a delightful game of Spot The Difference. In theory, telling the same story twice would be the worst possible decision a writer could make. In practice, it makes the episode incredibly engaging for the viewer, as tiny alterations in the words and actions of the characters give rise to larger and larger ripples. These changes eventually lead the Fringe team to confront Alistair not at his home, but at his lab, where Walter insists on going in to speak with the scientist alone.

HBO's Game Of Thrones is unparalleled when it comes to huge action on the small screen. But frequently, the most compelling scenes of any individual episode are when two characters simply sit down and talk to each other. The same is true of "White Tulip." After 40 minutes of mystery and action, the episode rises to a new level when the writers put John Noble and Peter Weller in a room together and let them have a three-minute long conversation about God.

This is perhaps the most frank discussion of faith in the five-year history of a show chiefly concerned with the wonders and dangers of science. It turns out that Alistair has figured out a way to save his wife without killing anyone: he'll simply teleport into an empty field, killing only grass and trees instead of humans. But Walter warns him that there are unforeseen consequences to breaking the laws of time and space that Alistair can't even begin to comprehend. Walter knows this firsthand, having spent the last 17 years of his life living with the consequences of kidnapping Peter from the alternate universe: an estranged relationship with his stolen son, confinement within a mental institution, and now all-out war with the alternate universe he inadvertently but irreparably broke all those years ago.

Walter tells Alistair that he's been looking for a sign of forgiveness from God himself. In his mind, Walter has even conjured up a specific symbol for this sign: a white tulip. Perhaps if God can forgive Walter for his transgressions, then so might Peter. Alistair appears to ignore this cautionary tale, activating his device and traveling back to the train once more, restarting the episode yet again. At his house, he fine-tunes his equipment, writes a letter, and disappears one last time.

A field, a bright red hot air balloon hovering above. A flash of light. A man suddenly appears where moments before there was only empty space; the green grass turns brown in a circle around him. Alistair runs. He finds his doomed fiancée, he reaches her car just as she's getting in, and...

He gets into the car with her. He kisses her hand and tells her "I love you" one last time before they're both killed by a speeding truck. Alistair had heeded Walter's warning after all. He understood that he couldn't live with the consequences of saving his fiancée — so he joined her in death instead.

And we're back at the beginning once more. Again, Walter is writing his letter to Peter. But with Alistair having died in a car accident 10 months ago, there's no train full of corpses, no one to call and interrupt his work. Given the proper amount of time, Walter is able to rethink his decision. There has been no sign from God; with no forgiveness forthcoming from on high, Walter has no faith Peter will forgive him, either. Instead of pocketing the letter, he burns it.

Shortly after, the mail arrives. Walter finds a letter addressed to him; although there's no return address, we know it's the letter Alistair wrote before he took his final trip. Walter opens it: inside, a few black lines on a piece of white paper, a simple suggestion of a solitary white tulip. Walter looks at the back of the paper; he looks at the door where the mailman just left; he looks up. Nothing. Who sent it? It doesn't matter: it's the sign he's been waiting for. Walter gazes up the stairs Peter just ascended, finally prepared to face the impossible task of telling his son the terrible truth.

What is it that makes "White Tulip" work as well as it does? The episode's success is in no small part due to the incredible work of John Noble as Walter. The fact that the man was not once nominated for an Emmy is still infuriating two years after Fringe ended. (Although "White Tulip" did earn the show its second — and final — Emmy nomination, a nod for Sound Editing; the pilot had previously been nominated for its Special Visual Effects the year before.) Weller's poignant work as Alistair Peck is a crucial ingredient in the episode's success, as well.

But perhaps what makes "White Tulip" work so well is the simple fact that it shouldn't. The episode repeats the same basic plot three times in the space of one hour. It enters dangerous spiritual territory for a show so firmly rooted in science. And, most remarkably, by the end of the hour, none of it had even happened. With his last jump into the past, Alistair erased the entire episode from the continuity of the series. Between Walter writing the letter to Peter at the beginning and receiving the white tulip at the end, literally nothing occurred in the characters' lives.

It's a daring ploy to write a whole episode that winds up negating its own existence. But while the Fringe team may be none the wiser about Alistair's adventures in time travel, the audience certainly is. There's a certain amount of dramatic irony inherent in knowing more than the characters onscreen, but the success of "White Tulip" goes far beyond that. Since Walter & Co. can't remember the events of the episode, the audience has to remember for them. It's like a gift, a little extra hour of Fringe stolen from the ether of the show's discombobulated universe; something we weren't meant to see... but we did. Everything about "White Tulip" is entirely unexpected, from its unconventional structure to Alistair's final choice. Viewers who tuned in anticipating another run-of-the-mill standalone "monster of the week" episode were unprepared for wild ride in store for them — and for the gut-punch of the emotional climax.

"White Tulip" is an hour of television that shouldn't work, that technically doesn't even exist... but thank god it does, because it's one of the most powerful episodes ever created — and it showcases why Fringe is one of the most criminally underrated series of our time.