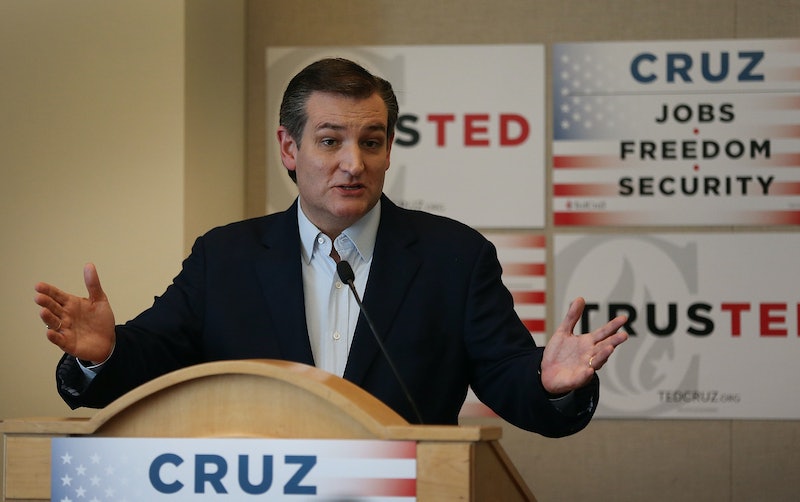 Having pretty much written off the New York primary before it began (he wasn't even in the Empire State the night he lost it), Ted Cruz showed that he has big plans for Pennsylvania. He’s been campaigning there heavily, dismissing celebrity billionaire Donald Trump’s New York sweep as a trivial home state advantage. But will Ted Cruz win Pennsylvania? Unfortunately for TrusTed, the polls indicate that Pennsylvania doesn’t bode especially well for him, either. Not only does Trump have a significant lead, but Cruz himself is barely keeping Ohio Gov. John Kasich at bay. Nevertheless, Cruz has been telling folks that "even if he comes in distant third" to Trump and Kasich, he’ll still get half the delegates. And that's not a wholly inaccurate boast.

There's a bit of a catch to the Pennsylvania primary. There are a total of 71 Republican delegates up for grabs — 54 of them unbound. They’ll be awarded in the winner-take-all manner, which just sounds like more bad news for Cruz, right? Nope. Apparently, in Pennsylvania, winner-take-all actually means winner-take-17-and-the-other-54-can-do-what-they-please. Hence, Cruz’s weird brand of optimism. As much as Trump whines about the delegate process, sometimes it really is kind of bonkers.

A GOP candidate will need to get 1,237 delegates in order to become the uncontested party nominee. Trump currently leads with 845 delegates. Cruz is next with 559. Kasich trails, as he is wont to do, with 148. The Ohio governor is at least getting sort of close to passing Marco Rubio, who dropped out of the race more than a month ago. Based on the delegate math, the only GOP candidate who could win uncontested is Trump.

New York awarded Cruz zero delegates — Ben Carson even outperformed him in one district — and you’d think after such a humiliating outcome, he would maybe be on his best behavior for a little while. But instead he's bragging as much as usual, and he really has not been able to cool it with the bizarre sexual innuendo. Cruz has presumably since had a serious chat with whichever writer got him to say this in Philadelphia on Tuesday night in his concession speech:

“You may have been knocked down, but America has always been best when she’s lying down with her back on the mat and the crowd’s given the final count. It is time for us as a nation to get up, to shake it off, and be who we were destined to be.”

It is certainly time for us as a nation to get up and shake off this weird imagery Cruz fed us (inadvertently?), but I don’t think he has quite shaken off his embarrassing performance in New York yet.