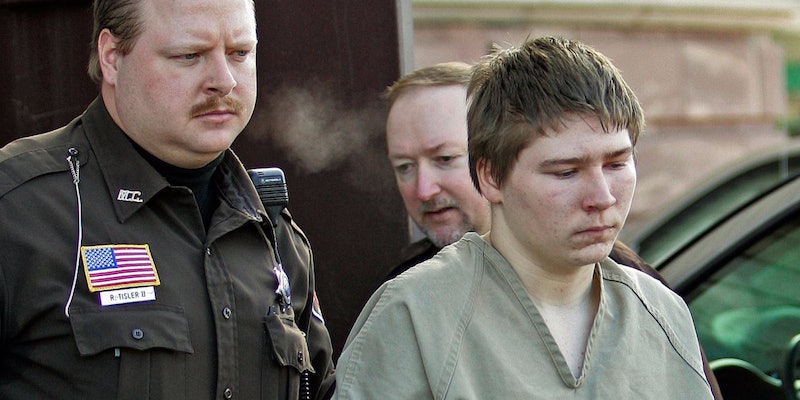 Over four months have passed since Netflix's Making a Murderer premiered, but that doesn't mean viewers have forgotten about the uncertain fate of Brendan Dassey, who was sentenced to life in prison as a teenager. Unlike his uncle Steven Avery, who was sentenced to life in prison without the possibility for parole, Dassey will be eligible for parole in 2048. Three decades is a long time to wait behind bars, especially if Dassey is innocent. His lawyers believe they may be able to get a retrial sooner, but in the meantime, photos show Dassey continuing to spend time with family and even smiling for the camera.

Today, Dassey is 26 years old. Since the docuseries showed footage of his police interrogation, viewers and lawyers have accused the Manitowoc Sheriff's Department of coercing the teen into confessing to the 2005 murder of Teresa Halbach. For a 16-year-old sophomore enrolled in special education classes, the 4.5-hour interrogation was deemed manipulative and unfair.

As Making a Murderer caught the nation's attention, Dassey became the dominant cause for concern. People began signing petitions and penning letters to him in prison. Though the series certainly helped raise awareness, his case has witnessed no significant updates, but he has promising attorneys working to change that.

Northwestern University School of Law professor Steven Drizin and Wisconsin attorney Robert Dvorak filed a lawsuit on behalf of Dassey, claiming that he was coerced by Manitowoc authorities, betrayed by his former attorney Len Kachinsky, and wrongfully imprisoned in 2005. Though the suit has been accepted by a federal judge, a decision has yet to be made.

Until then, we have these photos of Dassey in prison. From what it looks like, there's still a glimmer of hope within him.

One of Dassey's attorneys, Laura Nirider, told USA Today that he receives dozens of letters per day.

And He's Thanking Them

In a letter allegedly written by Dassey, he thanked his supporters and wished them a happy Easter.

He Still Spends Time With Family

His mother and other family members visit frequently.

Before Being Moved To A Different Prison