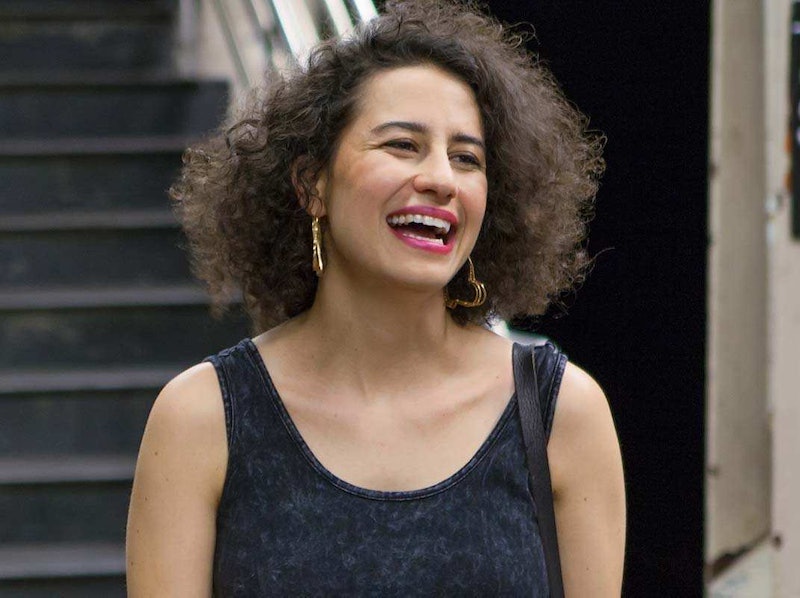 Being raised as a girl in a patriarchal society that often seems to shape its view of women's bodies through a rape culture-influenced lens, I've always had a complicated relationship with my sexual form. This relationship is something that has previously prevented me from wearing the revealing clothes I love so dearly. But Ilana Glazer's Broad City style has spoken to me on a very deep level, waking me up from my daze of shame and conflict into a newfound excitement for getting dressed in the morning. I'm willing to bet the same is true for a lot of young individuals, women, gender non-conforming, and feminine people especially.

Like Ilana Wexler, Glazer's BC alter ego, I'm a huge fan of the crop top (honestly, I don't think I own any full-length shirts at this point). I've always loved traipsing around braless in a crop and high-waisted shorts, or a bra top and a miniskirt, yelling about my sex life and my period.

But by the time I turned 18, all the years of dress codes and slut shaming caught up with me, which was reflected in my rising necklines and longer pants. I no longer had the courage to live as my uncensored, authentic self.

It wasn't until I started watching Broad City and became acquainted with the carefree and crop top-loving Ilana that I began to change the way I thought about my style. Here was an adult living in New York City completely empowered by her skimpy wardrobe and endlessly confident about her sexual body. The character's general message of carefree dressing and empowered sexuality helped me get more comfortable with my own version of those things.

As a person with fast-growing breasts and a lover of lower-cut tops, I constantly got in trouble for dress code violations. I was even sent to the principal's office on multiple occasions, where I was given cardigans to wear over my shirt and educated on the fact that boys might try to rape me if I showed too much skin.

In one particular instance, I simply walked out of said principal's office, refusing to wear her stuffy sweater and dismissing her words as nonsense. But being that I was only 12 when this happened, my body image was deeply affected by this attitude towards my clothing choices.

For this reason, I will never forget the scene from Season 2 of Broad City, in which Ilana's boss points out that her outfit has violated the office's dress code. Silliness ensues as she pulls down the crop top she's rocking in an effort to conceal her exposed belly and the elastic band of her boxer briefs, only to reveal her ample chest outfitted in one of her signature cut-out bra.

She quickly shrugs off this interaction, demonstrating just how silly policing women's outfits and bodies is while also taking a stand in favor of complete autonomy. Channeling Ilana, I began frolicking about in the skimpier clothing that I preferred more and more, almost hiding behind the character in the hopes that I would start claiming my true style identity for myself.

While I find revealing tops and short skirts to be incredibly liberating, I used to struggle to find feminine outfits that felt as kick-ass as the outfits I wore on days when I felt more masculine. The way Ilana mixes and matches feminine pieces with masculine ones, however, and the manner in which she clearly disregards societal standards concerning how women should act (yelling about your poop and vibrator are not usually included in cliché female narratives) has motivated me to stop assigning gender to clothing items. Some days, she's wearing overalls and a snapback by day, and then a miniskirt with heels and a long sleek pony by night.

This not only reflects my own wide gender spectrum, but it also demonstrates that one can be sexy without being hyper-feminine. Honestly, hardly anything Ilana wears is all that femme, yet she brings the same point of sexual feminine empowerment across nonetheless.

One of my favorite Ilana outfits of all time was the black and white jersey and black lipstick combo from the first episode of the show's second season. Her athletically chic look was totally sexy and edgy, as most of her outfits are, but evoked more of the masculine than the feminine.

Though I gravitate towards more revealing clothing, it's sometimes hard for me to choose something that evokes a fuller gender spectrum or even masculinity. But most of Ilana's outfits have served as perfect inspiration for me, and I'm sure many gender non-conforming individuals, as I piece together daily outfits that evoke equal parts carefree-ness and gender neutrality. Taking away that feminine versus masculine thought process has helped me feel more empowered, no matter what I'm wearing. The way that I now mix masculine tops with short skirts while rocking wild-colored lipsticks has been completely inspired by Broad City. Just because I have a vagina and breasts doesn't mean my brand of sexuality is feminine, after all, or that wearing revealing clothing will ever be inappropriate on my body.

As a teen, I was taught by my school and the media to hide my figure regularly. Luckily, in adulthood I have a better style and confidence role model in the form of Glazer's Broad City character. Ilana Wexler taught me that adults can wear crop tops, that blue lipstick is always a good choice, and that a cut-out bra peeking out of your shirt is the absolute best accessory there is.

And whenever I falter in my frolic down a Brooklyn street, decked out in a bra top and black lipstick, I remember the Yass Qween and am reminded of my right to be exactly who I am without apology.

More like this
Camila Cabello's Y2K-Chic 'Fit Serves Major Underboob
By Meguire Hennes
I Have Eyebrow Alopecia – & Microblading Gave Me My Confidence Back
By Jessica Morgan
9 Celebrity Couples With Matching Tattoos
By Jordan Murray
Yes, You Can Buy Off-White’s New Beauty Range In The UK
By Tomi Otekunrin
Get Even More From Bustle — Sign Up For The Newsletter