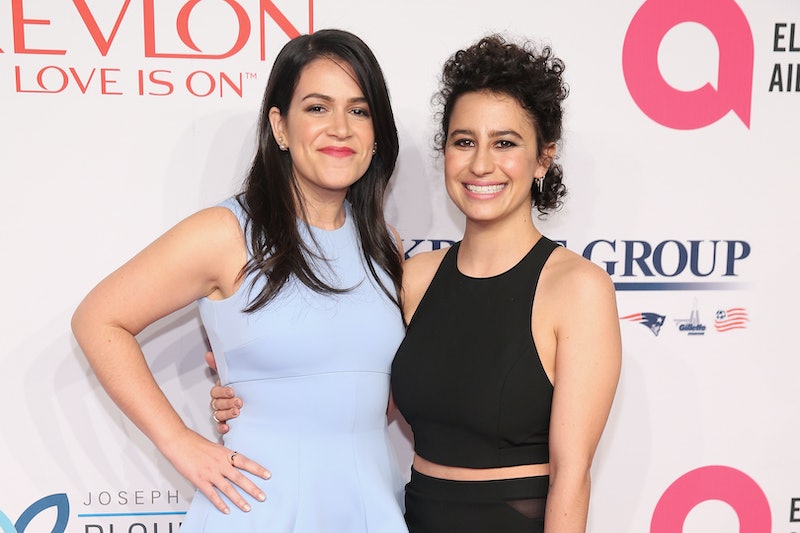 There's a lot to love about Broad City 's Abbi Jacobson and Ilana Glazer. Their Comedy Central show provides a more accurate representation of life in NYC than Carrie Bradshaw and Sex and the City ever could. Not only is their series relatable, but the episodes are laugh-out-loud funny. Personally, I can't wait for Broad City Season 3 to premiere Feb. 17. It's been far too long since those two were on my TV screen. In a recent interview, Jacobson and Glazer played 20 Questions with Playboy — and yes, it was as amusing and amazing as it sounds. Throughout the article, they repeatedly shut down any of the public's sexist misconceptions in the best way possible. The reporter asked,

A lot of female comedians, including Amy Schumer and both of you, have been accused of “sneaky” feminism. The Wall Street Journal explicitly described Broad City as “sneak attack feminism.” Why are you so sneaky?

Considering the tone of the interview, I'm guessing the question was meant in a fun, playful way. But in their flawless response, the ladies totally drop the mic. Jacobson said, "We’re both totally up-front and proud feminists. We’re not being all secretive about it. I feel we’re pretty blatant in our approach." Meanwhile, Glazer added,

I think it’s kind of crazy that we’re still calling comedians "female comedians." That seems more like a sneak attack.

Touché on that last part. Why is the phrase "female" needed to clarify the type of comedians they are? It's as if men are the only ones capable of being funny and having a career for it.

I love the fact that Glazer and Jacobson are loud and proud about being feminists, not trying to hide it all all. Of course, though, they had to throw some humor in there. Jacobson told Playboy, "I mean, sure, if you play the episodes of Broad City backward, there are hidden messages." Glazer threw in, "'Diiiie, men.' If you play any Broad City episode backward, that’s all we're saying." Obviously they're joking, you guys. That last part isn't true. (I mean, I'm assuming. I have not watched the episodes backward to confirm.)

Another highlight in the interview is when they explain Broad City is more than just a show for women. When the interviewer asked about their show providing lessons about "female friendship," Glazer explained,

She couldn't be more right — their friendship dynamic is enviable, not just for women, but any living and breathing human. Glazer and Jacobson's characters always have one another's backs and they're there through the ups and downs.

Finally, a third example of Jacobson and Glazer shutting down sexism is when the Broad City ladies are asked about the constant comparisons to another show about females in New York. Yup, you probably guessed it — Lena Dunham's Girls. The reporter references the common comparison and asks how the shows are different, since "both are about white upper-middle-class women who live in New York City and have lots of sex." Once again, Jacobson and Glazer had the perfect response. Here's their back-and-forth:

GLAZER: It’s so weird that that’s a thing. Like, “You tell me why I’m going to watch these two shows about talking and walking vaginas.”JACOBSON: Who has time for that?GLAZER: You’ve got the one show about some vaginas.JACOBSON: And then there’s that other show with the other talking and walking vaginas.GLAZER: I’m not going to watch two TV shows with vaginas in them unless somebody tells me why they’re different!

The moral of this story? Don't go comparing shows, just because they're about empowered women, who aren't afraid to talk about feminism and sex. Both shows are brilliant, but in their own distinct ways.

The fact that Jacobson and Glazer are hilarious and total #friendshipgoals isn't because they're women. If anything, that's just the icing on top of an already awesome — and blatantly feminist — show.

More like this
Adele’s All-Female Lineup Includes Kacey Musgraves, Mahalia, & Self Esteem
By Shahed Ezaydi
Why Simone Ashley Had To Study Snails For Intimacy Training, Pre-‘Bridgerton’
By Grace Wehniainen
James Marsden Kept Teddy’s Westworld Season 4 Return A Secret “For Years”
By Brad Witter
Don't Expect To See Your Fave Modern Royals Depicted On 'The Crown' Season 6
By Jack Irvin
Get Even More From Bustle — Sign Up For The Newsletter