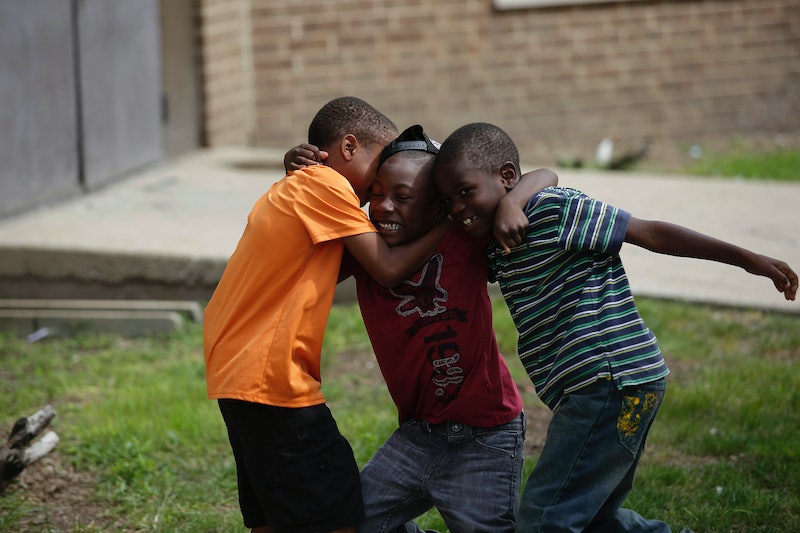 Remember that eye-opening video about how the media failed women in 2013? Well, the organization behind it, The Representation Project, is back with a new video tackling gender stereotypes — but this time, they’re bringing the boys into the mix. Using Easy Bake Oven commercials, “Hulk Hands” toy ads, images of WWE wrestlers, and even a shot of Kim Kardashian in Kanye’s baffling “Bound 2” video, “Rewrite the Story” shows both how girls learn to see themselves as objects, and how boys learn to associate power with domination.

The video is right to make the point that we need to be talking about the limiting narratives that are so frequently dished out to both girls and boys.

"This video was a way for us to tell this larger story of how we’re trying to break down first the gender narrative that is put on us from when we’re born — free people from that — and then continue to break down other limiting narratives that society often perpetuates," Imran Siddiquee, the Representation Project’s Director of Communications, tells Bustle. "So the video is our way of saying that’s what we’re about."

The Representation Project's origins are in Jennifer Siebel Newsom documentary Miss Representation, which premiered at 2011’s Sundance Film Festival. Newson founded MissRepresentation.org in April of that year as a non-profit geared towards "[highlighting and challenging] the limiting depictions of women in the media and our larger culture."

A little over a year ago, MissRepresentation.org began production on a new documentary, The Mask You Live In. An examination of how society is failing boys, it grew out of reactions Newsom got when screening Miss Representation.

"When she would go out and show Miss Representation people would often ask, 'how does this issue impact boys?'” Siddiquee says. This interest was mirrored on the organization’s Facebook page, which ultimately resulted in a successful crowd-funding campaign to get the new documentary made.

The organization’s change in name came directly out of The Mask You Live In, and according to Siddiquee, "Rewrite the Story" is the Representation Project’s mission statement.

"We realized that we needed a name that represented our bigger mission," Siddiquee says, "which is to change the way society labels and limits all of us and to create more opportunities for everyone to reach their potential — regardless of gender particularly, but also race, class, sexual orientation, all of those things."

The Mask You Live In is in post-production now; the organization will be submitting it to the film festival circuit this year, so with luck, we’ll be hearing even more about it by Fall 2014. Check out the trailer here: