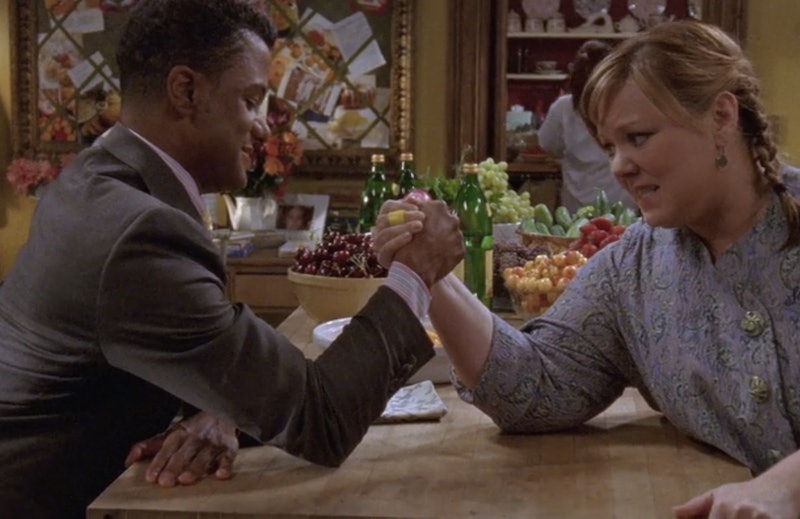 Yanic Truesdale — best-known for his role as Michel on Gilmore Girls — opened up about his career and the Gilmore Girls: Seasons four-part Netflix mini-series revival in an all new interview with AfterBuzz TV's Spotlight On. However, it was the truly nostalgic feel of the Michel-Sookie relationship that really stood out to me when Truesdale discussed Melissa McCarthy's return to the show. After McCarthy herself revealed that she hadn't been asked to return for the revival, hearts broke everywhere over the fact that Lorelai, Michel, and Sookie all wouldn't be back at the Dragonfly Inn. But, fortunately, when it was later confirmed that Melissa McCarthy was back in town, my Gilmore Girls-loving heart was mended. And it seems as if Yanic Truesdale's heart was mended too, as he was able to clear up some of the revival's casting confusion.

"No matter where you're at in life, your first break has a very special place in your heart. That's just normal. It's human nature. And Melissa who has an amazing career and who has this very unique place in Hollywood right now — and she completely deserves everything, she has a very unique talent — but started on Gilmore Girls," Truesdale said of the revival casting mix-up, "And no matter where she is now, she [I am sure] feels the show is very close to her heart." Of course, any fan can agree that, while Michel's character may have not always been as cheerful and peppy as Sookie, the show sure would be different if those two didn't have each other to balance each other out.

However, to make fan's heart's flutter even more, Truesdale not only shares his love for Sookie and the return to Stars Hollow, but he also was sure to let us know that, like a fine French wine, Michel is much more refined — as are all the actors on the show. "What really is different now is, first of all, we are older. And we have perspective. Which he didn't have," Truesdale explained. "And so you go back to it fully aware of the place that this show has in culture and on television. And I think there's an appreciation of going back and having a second shot at something that was so meaningful." I am just so excited to return to Stars Hollow with him and the rest of the cast. The nostalgia is just way too real.

The Gilmore Girls: Seasons revival will be premiering at the end of 2016 on Netflix while Seasons 1-7 are available now. Get your suitcase packed for a trip back to your favorite small Connecticut town.

More like this
Emma Thompson, Lashana Lynch, & Stephen Graham Lead Netflix’s 'Matilda'
By Sophie McEvoy
15 Intriguing Movies On Netflix That Are Based On True Events
By Mary Kate McGrath, Shannon Barbour and Grace Wehniainen
Everything We Know About When To Expect Money Heist: Korea Part 2
By Kadin Burnett
Viktor Hargreeves’ Coming Out Scenes Are The Sweetest Part Of Umbrella Academy Season 3
By Gretchen Smail
Get Even More From Bustle — Sign Up For The Newsletter