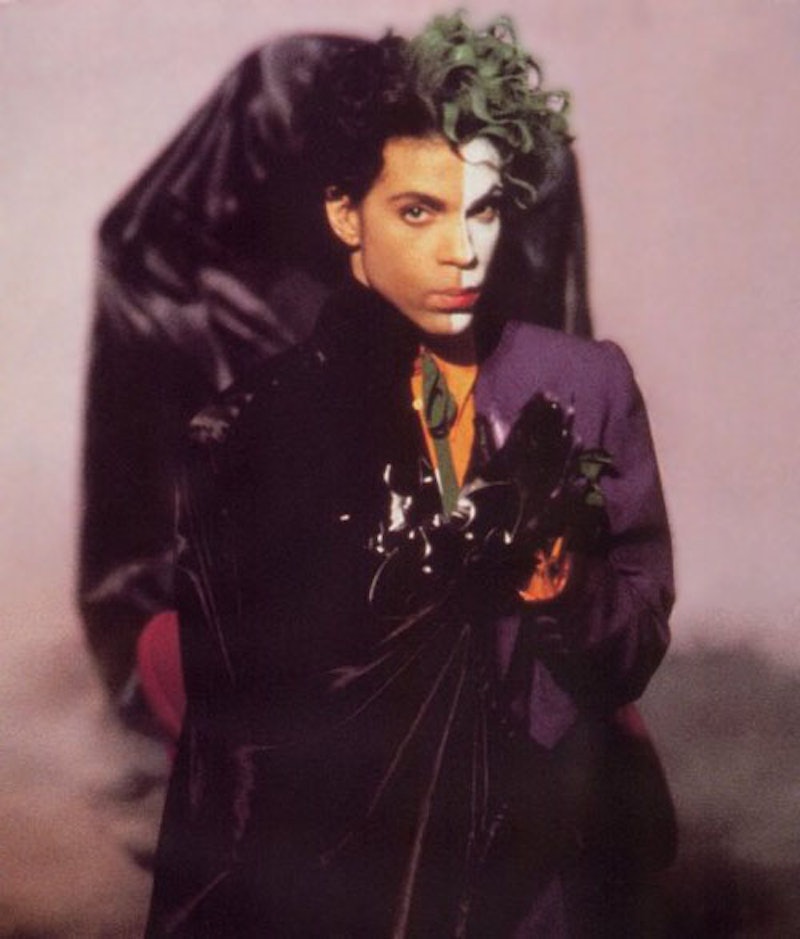 After hearing that legendary musician Prince had died on Thursday, many music and film fans no doubt turned to their favorite works by the artist to help them through their grief. Many probably recalled his masterpiece Purple Rain, while some folks in my generation might've reminisced over Baz Luhrmann's Romeo + Juliet and "When Doves Cry." But for me, the Prince work that I wanted to revisit wasn't either of those, or even Pretty Woman (who can resist Julia Roberts singing "Kiss" in the bathtub?) — it was the Prince soundtrack to 1989's Batman , directed by Tim Burton.

The album is one I really liked as a kid, but only later in life realized was pretty great. What makes it special isn't its effortless mesh of film and song, but for the fact that the album seemingly has nothing whatsoever to do with Batman. Seriously — instead of attempting to tie music in with the film's plot, style or thematically, as many soundtracks do, the Batman soundtrack was simply a vehicle for Prince to explore what Batman as a concept meant to him, in all its wacky, sexy, Prince-ified glory.

At the time of their release, Prince's Batman soundtrack and Danny Elfman's Batman score (which is also amazing) came out as separate albums, and the two artists didn't actually collaborate on any of the film's music. According to Comic Alliance, Prince's involvement in the movie came when "Burton asked Prince for two songs to go where he'd used '1999' and 'Baby I'm a Star' in the rough cut of Batman, Prince offered to record the entire soundtrack, and whipped up a bunch of material almost entirely by himself in his studio Paisley Park." Yet interestingly, the songs on Prince's album are barely in the movie. The whole thing is simply a weird side album that ended up having very little to do with Batman as a character or a film, and much more to do with what Prince thought Batman was and how he imagined the movie's story was going to go. It was Prince's version of Batman, and it turned out to be weird, goofy, and kind of perfect.

Like many Prince songs, the tracks on the album are long, and feature extended instrumental breaks or electronic jams — not exactly the stuff of bestsellers. But it was still a hit, staying on Billboard's Top 100 for six weeks, and it made an impact with its strangeness. Prince used much of the film's dialogue from actors Michael Keaton, Kim Basinger, and Jack Nicholson layered over the songs. He seemed to have an infatuation with Nicholson's Joker character, though on the album he's changed to a villain named "Partyman," which is also the title of the song that plays when Nicholson's Joker and his minions are trashing an art gallery in the film. What makes Prince's Batman album so interesting isn't its cool mixture of funk-pop and modern (for 1989) dance beats, but rather, its strange integration of the subject matter it's supposed to be supporting, without at all nailing the actual story of the movie.

If you follow the story provided by the songs of the Batman soundtrack, you'd get a completely different tale than the one in Burton's movie. As io9 recalled, "There's no mention of Batman being Bruce Wayne, or his parents dying in Crime Alley, thus leading to Batman's vow to fight crime. Instead, Batman has psychic powers — he can see the future, 'and it will be.'" It gets even more wacky when you bring the songs' music videos into the equation. Just take a look at the amazingly wackadoo video for "Batdance," with Prince playing the Joker (and himself?), and which utilizes Neal Hefti's '60s Batman theme. The whole thing essentially turns Batman into a super fun dance party:

According to Comics Alliance, there was apparently a bunch of recorded material that wasn't used on the album itself, but was made with Batman in mind and thus has that combination weird Batman-Prince vibe. There's "Dance with the Devil," described as "a long, unnerving song about the Joker," but that was cut from the album and has only ever appeared on bootlegs. "200 Balloons," "Feel U Up" and "I Love U In Me," too, have only appeared in B-sides. The most ambitious song Prince wrote for the album has got to be "The Scandalous Sex Suite," a song that runs almost 20 minutes, and, as Comics Alliance writes, "begins with an extended, flirtatious conversation between Prince and Kim Basinger," and "makes no pretense of belonging to Burton's Batman; it's Prince being his grand, freaky, sui generis self. That's the only approach that's ever worked for him."

The entire album is like that, and it's truly amazing. Rather than trying to figure out what Batman fans would want, what the film studio would want, or what even Burton himself would want, Prince just went his own way and made the Batman-centric album he wanted to make. It has practically no tonal or thematic similarities to the film it supposedly accompanies, but hey, that's Prince for you. The Batman soundtrack is fun, weird, wacky, and well-made — what else would anyone really expect from Prince? He was a guy who never conformed, never settled, and always made memorable music, and this album is certainly no exception.