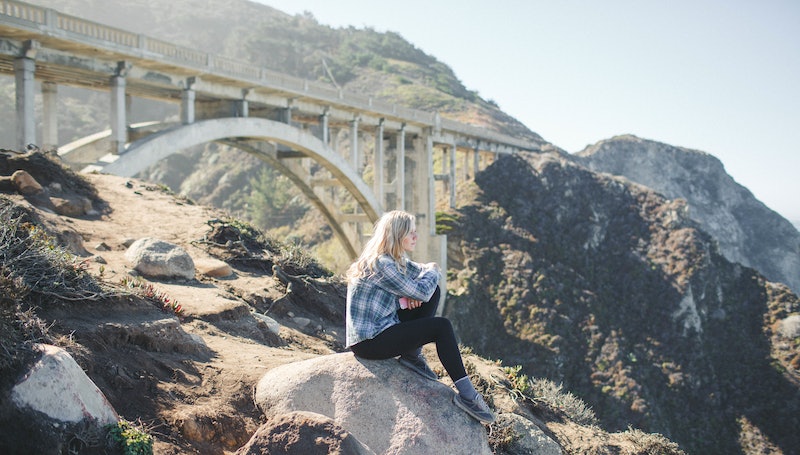 When I was a kid, I never wanted to be alone. I was an extrovert and got my energy from other people. When I was stuck with myself, I felt unplugged and disoriented. I needed to be around people to feel comfortabe. As I grew up, I started to feel more and more comfortable by myself. I enjoyed solo hobbies like reading, writing, drawing, listening to music. The more safe I felt alone, the less I needed to rely on other people for that feeling.

It wasn't long before I became introverted and everything I knew about myself and the world around me felt backwards. Spending too much time with people became exhausting — I needed to be alone to recharge and feel relaxed. When you live in a big city, it's ironically all too easy to be a loner. You're surrounded by so many people that seeing people becomes something that isn't personal. You don't have to know everyone, you don't have to interact with anyone. You can walk down the street and pass hundreds of people and politely ignore them as they politely ignore you. You can sit at a coffee shop for hours and never speak a word to someone sitting inches away.

For me, living in the city amplified my loner tendencies. It gave me the illusion of having company, without having the interaction and stimulation company provides. But as someone who has a tendency to slip into mild depressions, I have to periodically check in with myself and make sure I'm not doing too much or too little of anything. Because while over-scheduling and over-socializing can lead to anxiety, exhaustion and stress, a lack of social stimulation can be deadly. These are seven health risks of being a loner:

Psychologist John Cacioppo of the University of Chicago noted in his studies that isolated people and social people who were exposed to the same stressors perceived them differently. The loners interpreted the stress as more significant and had a more stressful body response to it. This suggests both a decreased tolerance to stress and an increased reaction it. Stress causes cortisol to be released by the brain which triggers reactions in all of the bodies important systems, stressing the heart, lungs, digestive system and suppressing the immune system.

People who are lonely on average tend to get less restorative sleep. They often wake up or sleep lightly and feel less rested in the morning which over time, can cause mental and physical distress. It's suggested that people who are lonely spend more time rolling around, tossing and turning, and stressing out than they do actually sleeping.

Loneliness And Depression Can Come Hand-In-Hand

Though it's hard to say in most cases which came first, the loneliness or the depression, the two often are found together. The suicide risk is higher for people who live alone and spend time alone than it is for people who have roommates and a social life. And it's harder for people who are lonely to have fulfilling friendships, because they can feel draining and one-sided.

A Lonely Body Doesn't Have Its Defenses Up

People who are lonely tend can struggle with a suppressed immune system. Studies show that anti-viral response and the production of antibodies are limited and greatly affected in the immune system of someone who is socially isolated. This puts lonely people at a higher risk of getting sick or fighting illnesses.

Loneliness Has Effects On Social Interaction

Studies show that people who have lived in social isolation who try to have social interaction have lesser experiences. Loners tend to achieve that positive exchange of energy and endorphin release that regularly socialized individuals have with an interaction. The more loners have negative social experiences, the less likely they will be to continue trying. This negative reinforcement can make a loner who's been isolated for sometime, give up on trying to be social and become even more lonely.

When you spend most of your time alone, your reference system becomes out of whack. So when you are around people, small instances that might be considered negative feel deeply negative to you. People who are socially isolated have much stronger reactions to negative behavior than people who are socially active and more unfazed by blips of negativity.

Loneliness not only surpasses your immune system, stresses your heart, your circulatory system, your reparatory system, your digestive system and your mental health, but it also effects the way others see you. Studies show that doctors are more likely to thoroughly help and treat patients who have a support system because they believe they're more likely to respond to medicine than people without any support system. Meaning, in a survey, doctors openly admitted to giving better care to patients who were not socially isolated.