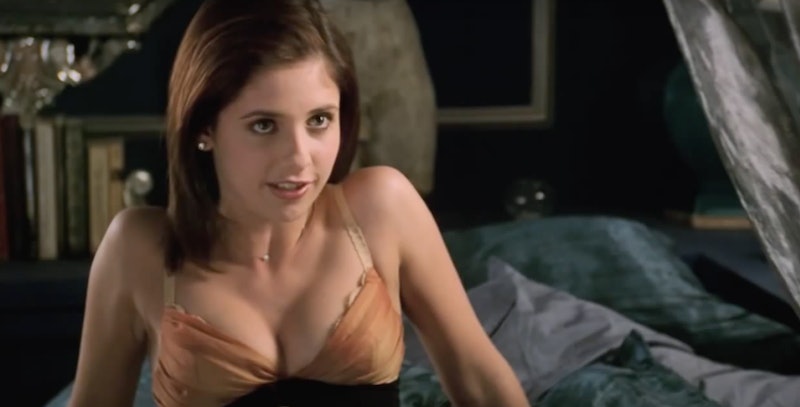 I dare you to name a better era than the '90s when asked the question, "When were some of the best films made?" From high school romantic comedies to sprawling fantasy flicks and even action-packed epics, the '90s were a golden era for movie-goers. There was something magical about the films made in the '90s. They had grand visions for themselves. They weren't afraid to deliver big on their characters while creating some compelling plots. Best of all, us millennials grew up watching them, so these days, they're nothing but nostalgia-laden for us. Is it just me, or is there a palpable shiver of excitement that washes over when you're channel surfing after a hard day at work and, by some miracle, you see that Jumanji or Clueless are showing?

These little snapshots back to the good old days are one of the many reasons we love the movies. Yet, there is also another great reason to indulge in the films which hold a special place in our hearts: the villains. Holy smokes, do you remember all the great villains in your favorite '90s films? There were some that were downright evil (I'm looking at you, Kevin Spacey in Se7en) but there were others that were oddly charming, endearing or maybe had a glint in their eye that said, "Go on, try and redeem me." Who are some of the most memorable? Let's take a look.

The best of the bad girls, Katherine was not one to be trifled with. She was selfish and daring in a way that was oddly attractive. While it's never cool to emotionally manipulate people like Katherine did, there was a certain cold, Upper East Side glamour that oozed from her, making her thoroughly enticing to watch.

Rebecca Ann Leeman predates Regina George as a high school mean girl, but don't be fooled. Becky could give Regina a run for her money. Her determination to win the Mount Rose American Teen Princess title was literally killer: Becky didn't pull punches. Karma bit her hard in the end — in the form of a poorly constructed parade float — but it was Becky's poise that made us wonder whether she wasn't the least bit ashamed of herself.

Summer camp should be a time of fun, full of crafts and bonfires and sneaking out for late-night canoe trips on the lake. Tony Perkis didn't get that memo. His methods to get the campers of Camp Hope in shape become more psychotic than superlative, so you can't help but cheer a little as he gets his just desserts.

4. Lestat From Interview with the Vampire

What is it about vampires that makes them so darn charming? Is it the piercing stare they've taken centuries to cultivate? Their perfectly chiseled cheekbones and perfectly coiffed hair? The air of mystery that permeates their very being? In the case of Lestat, it's all of the above. He was at one time a friend to the newly-turned Louis, but Lestat soon showed his true colors as an immortally loathsome bloodhound.

5. Nancy Downs From The Craft

Nancy is the perfect example of what happens when power goes unchecked. The Craft was Nancy's film: she cast an actual spell on viewers and had some of the best lines in the film (How many times did you spout "We're the weirdos, mister" to your friends and family?). She was ruthless and bent on revenge in a way that was frighteningly fun to watch.

6. Hannibal Lecter From Silence of the Lambs

The biggest, baddest wolf of them all is definitively Hannibal Lecter. It may be hard to understand what makes Hannibal tick and hearing about his crimes may make your stomach turn but that didn't stop any of us from watching in awe as he slowly unnerved Clarice Starling. Every movement was so careful, every word was so calculated. Watching actor Anthony Hopkins' performance was part of what made peeling back the layers of Lecter's mania so intriguing.

7. The Sanderson Sisters From Hocus Pocus

I think I speak for all of us when I say it's difficult to choose a favorite sister because they were all so goofy and diabolical, making it so easy to relate to them. Even though their plot to lure the children of modern-day Salem back to their ancient cabin in the woods was a less-than-ideal one, it was so hard not to fall in love with them. They were a slightly cartoonish caricature of the witches you read about in fairytales, making their villainy a bit sweeter to sink your teeth into.

Cal was the worst. No, really. He was an entitled jerk and an actual embodiment of #TeamPatriarchy. It wasn't tough cheering for Jack when you put him next to Cal. Maybe it was the brooding demeanor, the remorselessness that came with keep Rose under his thumb or the way he ordered dinner for her (stop it, dude!), but Cal deserved to end up alone. Yes, it was a little heartbreaking to hear about his fate, but let's be honest, he deserved it.

Oh Sid, you adorably troubled child. If only he could have hung out with Andy a little more so that Andy's sweetness could have rubbed off. I don't know what was more horrific: Sid's collection of Frankenstein-esque toys that he created or his oddly precise use of a magnifying glass as torture device. Either way, Sid left me hugging all my toys for dear life weeks after seeing Toy Story.

10. Agent Smith From The Matrix

Oh yeah, let's just all get on board for the computer program in a suit who is out to kill the savior of humanity. Not! Agent Smith was fun to loathe not only because he could dodge a bullet with serious aplomb, but also because his ability to infiltrate the Matrix was both masterful and frustrating. Just leave Neo alone and accept your fate, Agent Smith. Seriously.

11. Scar From The Lion King

Scar is that family member at Christmas dinner that will eat all the mashed potatoes and offer you fruitcake as a replacement. He is the friend that knows full well you're allergic to dairy but buys you a whole milk latté with whipped cream just to watch you suffer. Scar was so villainous in his pursuit of ruling Pride Rock that he killed his brother and scared of his young nephew. He mowed down his own family for her personal gain. Ugh, Scar, you were the worst.

What's more villainous than a baddie that you can't even see? The Blair Witch Project is the originator for the recent wave of found-footage films that have swept through cinema but don't get it twisted: this film is one of the best. Why? Because the titular torturer goes unseen for a majority of the film and yet has no qualms scaring its victims to death. Even if Heather, Josh and Mike deserved to get lost, there's nothing worse than being haunted by an unseen entity.

13. Tyler Durden (The Brad Pitt One) From Fight Club

The morally dubious alter-ego of Edward Norton's version of Tyler Durden, when embodied by Brad Pitt, Tyler was so handsome yet so frightening. His plans to shake up societal norms through his acts of rebellion and rebellion had you cheering him on in the moment. In retrospect, his approach to life was more mayhem than rebellion, more dangerous than cool and that's a villain you don't want to get into bed with.

Who's up for a marathon right about now?