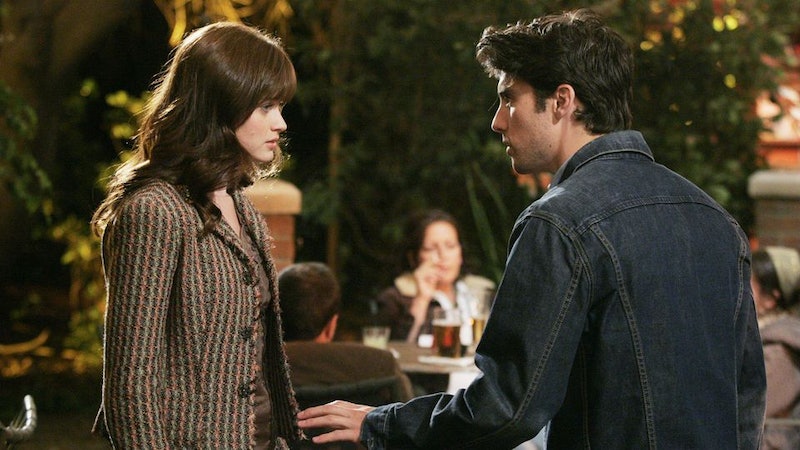 Your favorite imaginary boyfriend (OK, my favorite imaginary boyfriend), Milo Ventimiglia has a new show coming out, and all bias aside, it sounds pretty great. Aptly streaming on StyleHaul's YouTube channel, Relationship Status is a sprawling, ensemble love story framed by the social apps of the digital age which features 30 characters interacting across 11 different storylines in Los Angeles and New York.

Ventimiglia, who is an executive producer on the show as well as starring in it, plays Jack, a gay bartender in New York who the actor revealed in an interview with ET is "a wild one," explaining that he's going against his usual character type for the role:

I think people know me more for the dark, and the moody, and the broody, but Jack is, he’s light and he’s fun. He’s a bit of an old soul and a young spirit, combined in one.

I don't know about you, but it feels about right to see Ventimiglia let his (now super lustrous) hair down and maybe have a bit of fun for once, and this show sounds just the ticket for that happen. Ventimiglia also seems to understand that double-edged sword of digital connections, too, where access is easy but intimacy is still just as difficult as it always was, adding:

Basically it’s the idea that we’re all so connected, but we’re all still so separated by these things that are actually ‘connecting’ us ... You gotta still connect on a human level, and the fun and the sadness that goes along with all that.

1. They Would Have Started Making A Real Connection Sooner

Staring at each other across a diner or arguing in the town square is all fine and good, but something tells me that Jess would have been hitting up all of Rory's social profiles from the second he met her, and Rory would have recognized a misunderstood, bookish kindred spirit in him right away.

2. Jess Would Totally Overdo His Connection To Rory On Social Media

But that's not to say that he wouldn't still be making her squirm in front of boyfriend, Dean. Can you imagine him? He'd be constantly posting on her Facebook wall and tagging her into all of his Instagram posts about Ayn Rand and Allen Ginsberg.

3. They Could Have Pre-Planned Their Respective Break-Ups

Instead of turning up to the Stars Hollow dance marathon with his girlfriend and making a show of his chemistry with Rory in front of Dean, those two lovebirds could have figured things out way sooner in the comfortable, less awkward confines of a text-based conversation and just coupled up in a way in which no one got quite so publicly hurt.

4. Jess Could Have Explained His Swan Fight So Much More Easily

We all remember how well that black eye went down during dinner at Richard and Emily's, but if Jess could have simply taken a picture or a video of the renegade swan who attacked him, then his shiner could have become a self-derogatory funny story rather than the bone of contention that it became.

5. That Whole Distillers Concert Fiasco Could Have Been Easily Avoided

Seriously. Like, I get that maybe he wouldn't want to make a gigantic phone call to Rory and ruin the surprise that he was taking her out, but if those crazy kids would have just had smartphones, then he could have hit her up at home with a "hey, don't go anywhere tonight, OK? Got a surprise" message and everything would have worked out just fine.

6. When He Needed To Bail, He Could Have Still Stayed In Contact

And let's face it, he bailed a lot. Phone calls can be difficult when you've got some heavy and complex emotions happening, and it would make sense that, as a writer, Jess would feel far more comfortable articulating his mindset and his feelings in a set of pocket friendly messages rather than an in a painful phone call. They could have remained close and Rory wouldn't have been quite so mad at him.

I get it, public transport can be an unpredictable pain, but when Rory goes to visit Jess in New York and ends up missing her mom's graduation because of a damn bus, it's pretty clear that had she just had the right app installed on her phone, she could have easily tracked the best and quickest way to get back and organized herself accordingly.

8. Jess And Rory Would Have Always Found Their Way Back To Each Other

This is just a theory, but no matter how happy Rory would be with any of her future boyfriends, I get the feeling that she'd still always be looking up Jess' social profiles and reading his articles online, just as he would be with her. And you know as well as I do that there's no way they could have stayed away from each other in that environment.

Who knows? Maybe in the Gilmore Girls revival Jess and Rory will be together again, thanks in part to the power of social and dating apps? Fingers crossed, because this writer is Team Jess all the way.

You can watch the first episode of Relationship Status streaming on Thursday, April 28 on StyleHaul's YouYube channel.