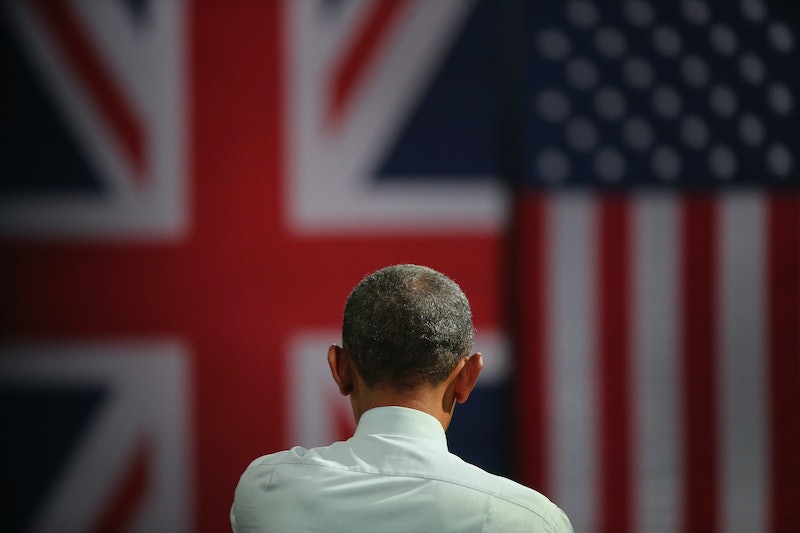 On what is expected to be his last trip to the United Kingdom while presiding over the Oval Office, President Barack Obama did what he does best: He inspired. On Saturday, during a town hall event the president hosted for young leaders in London, a non-binary youth came out to President Obama while questioning him on the legislative backlash currently impacting the U.S. transgender community. Inspired by Obama's own words, 20-year-old Maria Munir decided to do something a "little crazy" in the hopes of highlighting a cause close to their heart.

"Now I'm about to do something terrifying," Munir said candidly. "I'm coming out to you as a non-binary person, which means that I don't fit — I'm getting emotional, I'm so sorry — because I'm from a Pakistani-Muslim background which inevitably has complications."

According to Munir, the exchange with Obama was the first time they had publicly identified as a non-binary person, meaning they have a neutral or non-existent gender identity. Before Munir's parents knew, Obama knew. "It was something the president said about acting crazy — that if you need to get a social issue across sometimes you need to act a little crazy," Munir told BBC Newsbeat about their spur-of-the-moment decision to share a personal story with the president during a Q&A at London's Royal Horticultural Halls.

"I just thought, if anyone in the world is going to accept me for who I am it should be the president of the United States," they continued. "If anyone has the power to change things for people like myself across the world, it is President Obama."

In getting personal, Munir hoped to put transgender issues into the spotlight and challenge Obama to do more for LGBTQ rights. Munir specifically referenced a controversial bill recently signed into law in North Carolina which requires transgender people only use public restrooms that correspond to the gender assigned to them at birth:

I know that in North Carolina recently with the bathroom bill people are being forced to produce birth certificates to prove their gender in order to go the toilet. In the UK we don't recognise non-binary people under the Equality Act, so we literally have no rights. So, if there was any discrimination there's nothing we can do. I've been working for the last nine months ... in order to do what I can even though I'm still in university and running for local election at the same time. I've managed to get them to respect pronouns, I've managed to get them to commit to gender neutral toilets. And these are things I've done as a student and I really, really wish that yourself and David Cameron would take us seriously as transgender people. Perhaps you could elucidate as to what you can do to go beyond what has been accepted as the LBGTQ rights movement, including people who are outside the social norms?

Obama took a moment to applaud Munir's courageous activism before turning his attention to their question. "I'm incredibly proud of the steps it sounds like you've already taken to speak out about your own experience and then to try and create a social movement and change laws. It sounds to me like you're on the right track."

Unfortunately, Obama missed an opportunity to really advocate here, choosing to largely sidestep the issue of transgender rights. The president admitted that America's federal system, which dictates that power is shared between national and state governments, meant there wasn't much he could do about North Carolina's new law, which he'd said was "wrong and should be overturned" the day before.

Obama, who'd spoken earlier in the event about effective ways of pushing for social change, told Munir he thought social attitudes concerning transgender people were improving faster than he'd seen on any other issue. "It doesn't feel fast enough for you, or for those who are impacted, and that's good," the president added. "You shouldn't feel satisfied, you should keep pushing. But I think the trend lines are good on this. We're moving in the right direction in part because of courageous active young people like yourself."