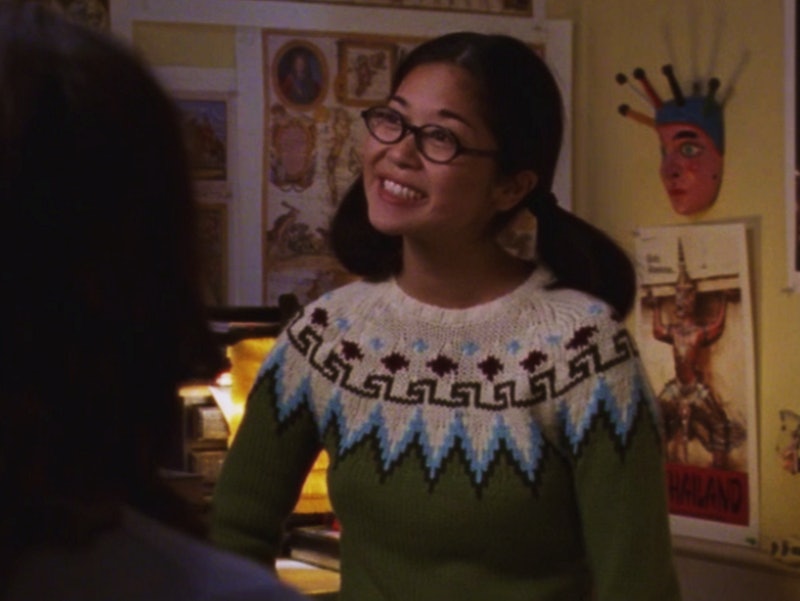 Don't you hate those people who, instead of watching a TV show like Gilmore Girls like a fully-formed adult, acknowledging that all the show's characters are fictional, instead insist on watching a show with all of their heart and soul, bleeding emotions because the characters don't treat each other the way they should? Who groan audibly when something bad happens? Who shout at the TV screen just like the characters can hear them?

Yeah, I'm describing myself: My name is Sophie and I have a fictional character abuse problem. While critics and audiences alike have simpered over Gilmore Girls characters like Lorelai, Rory, Sookie, and even sulky Luke, Lane Kim is one character who has not been raved about. Not by the critics, not by the audience, and certainly not by Rory Gilmore. And it drives me mad! Why isn't anyone treating the wonderful, the incomparable Lane Kim the way she merits being treated?

Perhaps the critics and audience are simply echoing the way the characters on screen treat Lane: kind of as an afterthought. Because although Lane is Rory's best friend from the first episode of the first season onward, it doesn't seem to take much for Rory to forget about Lane. She forgets about Lane when she gets all cow-eyed over Dean or when the schoolwork piles on at Chilton. What makes this hard is that Rory's home seems to function for Lane as a much-needed escape from her strict home environment:

Rory isn't just a friend to Lane — she and Lorelai are Lane's life raft. At their house, Lane gets a little breathing space: She can talk about music or rock a band shirt if she wants to. What's weird is that Lane's sense of humor and pace of talking make her a perfect third musketeer for the Gilmore household. And yet, she remains far more marginalized a figure in their lives than, say, Paris, who is downright abrasive and mean at times and yet still seems better equipped to form a lasting relationship with Rory and her mother than Lane, even though the Gilmore girls seem to eyeroll their way through most of it.

She's also been underappreciated by critics, which is weird when you consider that Lane makes up a third of the show's non-white cast members (the other two-thirds being represented by hotel concierge Michel and Mrs. Kim), so they would be of particular interest to an overall look at how well Stars Hollows functions as a whole (are immigrants welcome there? Integrated? Is this meant to be a realistic depiction of small town America or an idealized version of the same?). Perhaps this is because critics are downright uncomfortable with what they perceive as the portrayal of Lane's family being heavily reliant on stereotypes. This piece on The Rusty Life describes Mrs. Kim as "so over-the-top, so insane, so intense. Her character is indeed a[n] ... exaggeration of a stereotypical Asian immigrant parent."

And obviously she's kind of right: Mrs. Kim screams at teenagers and is pretty much unreasonable 'round the clock. But, it's important to keep in mind that, as a previous Bustle article has explained, Lane Kim is based on Helen Pai, a longtime friend of Gilmore Girls creator Amy Sherman-Palladino and whose life was used as inspiration for the character: Like Lane, Pai "grew up in an Adventist household with a strict mother." The portrayal of the Kim is really just an over-adherence to biography.

Still, the fact remains, the scenes with Lane involved include some of the sharpest dialogue in of the show. Remember this?

Lorelai: Where does your mom think you are?Lane: Oh, uh, on a park bench, contemplating the reunification of the two Koreas.Lorelai: Not here, skanking to Rancid?Lane: Wouldn't be included.

Remember two years ago, I got my mom that perfume? OK, to me that said, "Hey Mom, you work hard, you deserve something fancy." Now, to my mother it said, "Hey Mom, here's some smelly sex juice — the kind I use to lure boys with." And resulted in me being sent to Bible camp all summer.

Rory: What is that stuff?Lane: Eggless egg salad. Though this year my mom added food coloring to make the egg-like product look more eggy.Rory: Smart.Lane: And every sandwich comes with your own personal pamphlet "Dancing for the Devil," an illustrated look at the effect of dancing on your chances of spending all eternity in hell.Rory: Boy, her flames are getting really good.Lane: Well, she just bought a new color printer. You can do a ton of stuff with it.

You guys, I rest my case. Lane may not appear in as many scenes as Lorelai, but she's every bit Lorelai's equal as a sparring partner for Rory. So next time you rewatch Gilmore Girls, keep an eye out for our favorite girl, the most underrated Gilmore girl, Lane, and turn up the volume. You won't want to miss any of the jokes, I promise you.