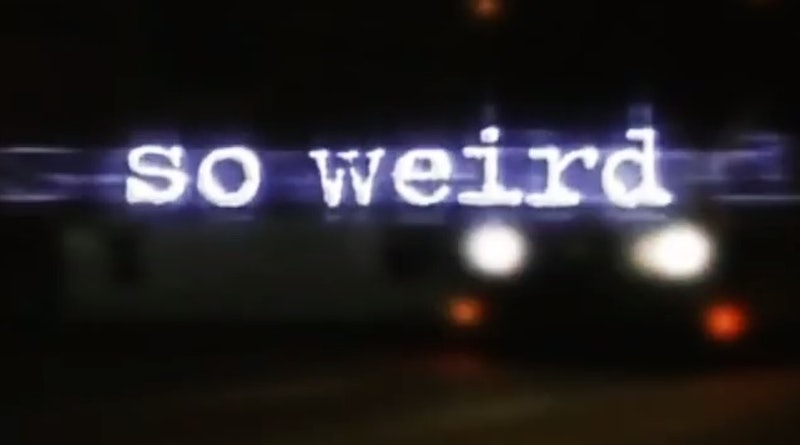 We all remember Full House, Clarissa Explains It All, Are You Afraid of the Dark, and The Rugrats as our general viewing in the '90s — but the best '90s show you forgot existed Disney's So Weird , without a doubt. The series followed a young girl named Fiona (Cara DeLizia) as she traveled the United States with her mother Molly (Mackenzie Philips), brother Jack (Patrick Levis), and their family friends the Bells. Fiona was like a young Fox Mulder (of The X-Files, of course), in some ways — every stop the family made during Molly's comeback musical tour led Fiona to a new supernatural occurrence that, sadly, no one besides Fiona believed actually happened. The first two seasons of the series which aired between 1999 and 2000 were darker and grittier than anything else Disney had ever put on the air before or since (The much maligned Season 3 saw the departure of DeLizia and the introduction of Annie, played by Alexz Johnson, who brought with her a much lighter, more Disneyfied tone.)

The show was amazing — and, unfortunately, it has also largely been forgotten over time.

Unlike Nickelodeon which feeds our '90s nostalgia with Teen Nick blocks of their classic shows, Disney tends to keep most of their old shows locked up in a vault somewhere. Even in 2014, when the channel did experiment with dusting off old favorites like Lizzie McGuire and Even Stevens on ABC Family, So Weird did not make the cut, despite the preteen X-Files style show's cult following.

In light of that, here's my impassioned plea: Do not forget about So Weird. It's too good to be left to collect dust in the recesses of our '90s TV loving minds! And here's why:

Although it was aimed at preteens, So Weird featured a complex mythology involving the death of Fiona's father and how her lineage connected her to the supernatural realm. The show had its share of fun episodes, like the one where a troll turned everyone into vegetables, but it was genuinely scary too.

The more involved Fiona became with ghosts, the will 'o the wisp, and everything else lurking on the other side, the more dangerous her life became. At one point she is tossed off the side of a building by an angry spirit and left dangling from the edge while another episode dealt with Fiona's father figure "Papa Bear" becoming violent and unstable after a heart transplant. It was the mythology and real sense of danger that hooked fans both young and old. So Weird never talked down to its audience and its audience responded with passionate devotion in turn.

So Weird was not just a great genre show though, it was one of the first series to fully embrace and showcase how tech-savvy teens were becoming. Fiona had her own website (which was once available for fans to visit IRL) where she spent copious amounts of time researching and chatting with people all around the world who also believed in the supernatural. The web was Fiona's toolbox and her connection to the outside world as her family moved from place to place. This was pre-Facebook, Tumblr, and Twitter, people.

As if its near telepathic predictions of our internet obsessed futures were not enough, So Weird also consistently featured original music. The original songs sung by Philips' Molly dealt with the loss of childhood friends, the death of Fiona's father, and Molly's complicated relationship with her father. The songs ranged in genre from rock to the Blues to ballads.

Once upon a time, So Weird fans could get their fix by watching full episodes on YouTube, but, sadly, they were taken down due to copyright infringement. With no official DVD release or streaming deals, So Weird is stuck in TV purgatory, remembered only by those '90s fans who followed Fiona's adventures into the unknown in real time way back before bingewatching was a thing.

It may not be easily accessible, but So Weird is worth seeking out. While most of our '90s nostalgia is aimed at the quaintness of the TGIF lineup and the addictive SNICK block, it is only fair that we remember how thrilling, spooky, and fun So Weird was. I know my '90s viewing experience would not have been complete if I had never watched Fiona investigate aliens, work her web magic, and save the day all while being one of the most authentic teens on TV.