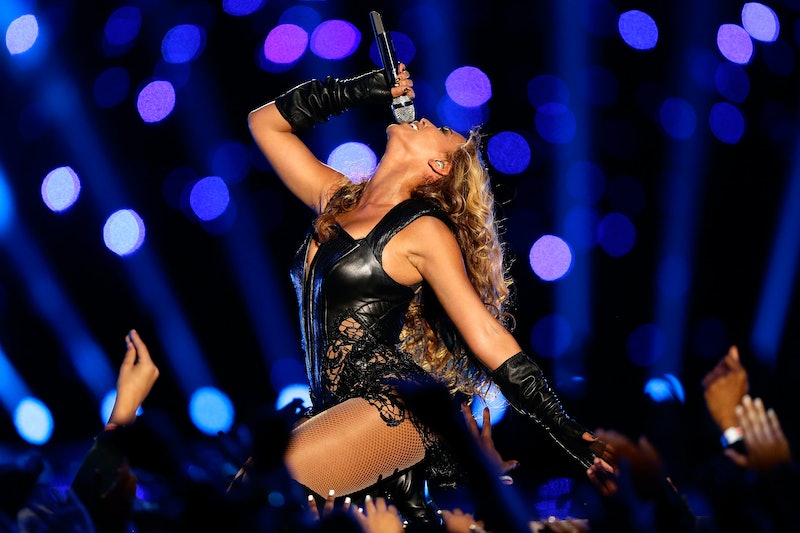 Beyoncé debuted her super mysterious Lemonade TV special on Saturday, and while the hour-long special featured music, dance, and much more, the project was powerful in more ways than one. Beyoncé's Lemonade, a visual album, featured home video clips from the singer's childhood, intimate (though mysterious and unclear) details about her personal life and marriage to Jay Z, hints about possible cheating and infidelity, and haunting imagery. While a major common thread through all of these different aspects of the album/TV special is certainly the mysteriousness of it all (no one is quite sure what everything means as of yet), many of the lyrics of Bey's songs (now streaming for your listening pleasure on Tidal, of course) were decidedly feminist.

While we may never know, even with major speculation, exactly what Queen Bey was implying throughout Lemonade, we can decidedly say that her lyrics are powerful, empowering, and emotional. I know I certainly wasn't the only one getting chills throughout the entire HBO special. Come on. While each song was different (everything from acoustic, stripped down songs to piano ballads are on Lemonade), the lyrics were all incredibly emotional. And, in true Beyoncé fashion, most of them speak to the beauty of being a strong woman. Here are seven examples feminist lyrics from Lemonade that you might have missed (but shouldn't).

Beyoncé throws the idea of being jealous over someone after being treated badly and "walked all over" in the world's face.

Who the f*ck do you think I am?You ain't married to no average bitch boyYou can watch my fat ass twist boyAs I bounce to the next dick boyAnd keep your money, I got my own

Get a bigger smile on my face, being alone

"Don't Hurt Yourself" had a few feminist gems, with this being one of the best sections of the song.

Queen Bey, dragon, lion, etc. Beyoncé is everything, and she is not broken or crying of anyone.

Hell yes, God can be a woman, says Beyoncé.

"Stop interrupting my grinding. I ain't thinking 'bout you." YUP.

Lyrics are, by nature, open to interpretation. So there's a possibility that what you take a certain line in a song to mean might not be exactly what Beyoncé was trying to say. But the ideas of Lemonade are the same regardless. Beyoncé is a woman who has been hurt, angry, in denial, and everything between — but she wants the world to know she's still here, still strong, and still a powerful force who is just as influential as any man will ever be. What's more feminist than that?