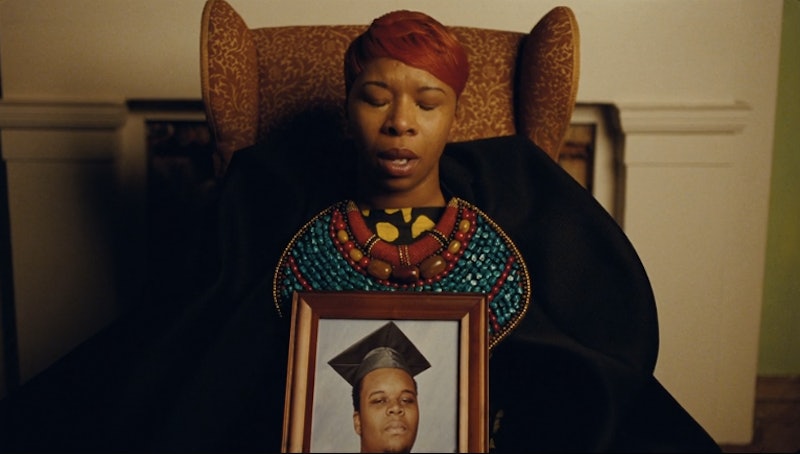 I think it's safe to say that Beyoncé's Lemonade HBO special was a visual epic. In fact, calling it a visual epic would actually be an understatement at this point, because there was just so much to dissect. One of the blink-and-you-miss-it moments that you absolutely don't want to blink and miss was the moment when Beyoncé referenced police brutality in Lemonade, specially when she had the mothers of victims of police brutality appear in the special. The shot was so difficult to watch, especially when one of the mothers couldn't make it through the shot without beginning to cry, but it was so powerful and impactful and I was in tears just watching it. And no, not just the tears that were already streaming down my face as I screamed, "Praise Beysus." But before I get ahead of myself, let me break this down, because this very serious moment really does deserve all of our attention.

The moment happened near the end of the special. "You are terrifying and strange," Beyoncé narrated while wandering through a dark, ornate house alone. "And beautiful." Then, the music kicked in, and James Blake sang, "Forward. Best foot first just in case. When we made our way 'til now. It's time to listen, it's time to fight. Forward. Now we're going to hold doors open for a while. Now we can be open for a while. Forward. I love you more than this job, please don't work for me. Forward. Go back to your sleep in your favorite spot just next to me. Forward, forward." All the while, we saw image after image of black women holding up the pictures of their sons who had been killed, pictures we've seen on the news, pictures that still haunt us to this day.

Fittingly, the song to play immediately after this one during the special was "Freedom," because Beyoncé can hardly afford to be subtle about such an issue. But the fact that she chose to highlight it in this way, by giving the women most affected by the issue a platform and the visibility, is just classic Beyoncé. Ever since the release of "Formation," especially the music video, we've all been sort of aware that Beyoncé's next album would be her most political one yet. And not only did Lemonade live up to that, but it was also raw and real and impactful. People will be talking about every single aspect of the special, of course, and listening to the album again and again, but no part of the special will compare to this single moment, this single shot, this single action.

Check out the haunting images below.

More like this
The 2023 Grammy Nominations List Is Full Of Surprises
By Jake Viswanath
Emma Corrin Spoke Out Against “Clickbait” Headlines Surrounding Gender Conversations
By El Hunt
The 'Love, Lizzo' Harry Styles Scene Is Just 1 Moment That Made Fans Feel Seen
By Brad Witter
Kim Kardashian & Tristan Thompson Had An "Inspiring" Thanksgiving Celebration
By Brad Witter
Get Even More From Bustle — Sign Up For The Newsletter